LITTLE ROCK (AP) — Coronavirus cases continued to soar in Arkansas, approaching the 100,000 mark as Gov. Asa Hutchinson said Friday this weekend “is critical” to the state’s fight against COVID-19.

The state Department of Health on Tuesday reported that the new confirmed cases bring the state total for the outbreak to 97,539 with 8,609 now active and 590 requiring hospitalization.

The actual number of cases in Arkansas is likely higher because many people have not been tested, and studies suggest people can be infected and not feel sick.

In a statement Friday, while noting Thursday’s record number of new cases, Hutchinson called it “another new record in our testing efforts. With over 15,000 total tests, we can see the results of our investment and commitment to grow Arkansas’s testing infrastructure.”

However, he added, “This weekend is critical as we continue to battle COVID-19. Remember to wear a mask, keep your distance, and wash your hands frequently.”

Hutchinson has mandated face masks to be worn in public, social distancing and restaurant seating be limited to two-thirds capacity.

For most people, the coronavirus causes mild or moderate symptoms, such as fever and a cough that clear up in two to three weeks. For some, especially older adults and people with existing health problems, it can cause more severe illness, including pneumonia and death.

School Resource Officer Steve Ferguson did not hesitate to begin handing out backpacks to students in need after recently receiving a donation of 131 backpacks.

“The backpacks were graciously donated by Sam’s Club in Conway. I have already been in contact with several teachers inquiring as to how many of their students are in need of them,” Ferguson said. “As of [Friday], I have already dispersed approximately 40. These will definitely help our children in our community that are currently using old and worn out backpacks or in some cases, not having one at all.”

Ferguson stepped into the school resource officer at the beginning of the school year. The Faulkner County Sheriff’s Office deputy serves the Mt. Vernon-Enola and Guy-Perkins school districts.

The deputy served various roles in law enforcement before joining FCSO and ultimately becoming the county school resource officer. However, Ferguson said he enjoys mentoring children and is excited to help guide them toward a safer future.

“Both Mt. Vernon-Enola and Guy-Perkins schools have welcomed me into their campus with open arms,” Ferguson said. “I consider it a privilege and an honor to be a part of their school family.”

Being the school resource officer also means looking after the students in more ways than just their overall safety at school.

“I have found that there are several families in our community that are in need of several things, including food,” he told the Log Cabin Democrat. “I would like to give a big thanks to AT&T for donating several Patrol Packs to the Faulkner County Sheriff’s Office to be given to families in need.”

The patrol packs included nonperishable food items and given to deputies to hand out while on calls or patrolling and noticing a family in need.

“These packs include several nonperishable food items that we have been delivering to the schools to help supplement the food needs for our children and families in our communities,” Ferguson said. “As of [Friday], there has been over 150 patrol packs delivered to families throughout the county.”

The deputy said he was thankful for the support given to local students by Sam’s Club and AT&T. 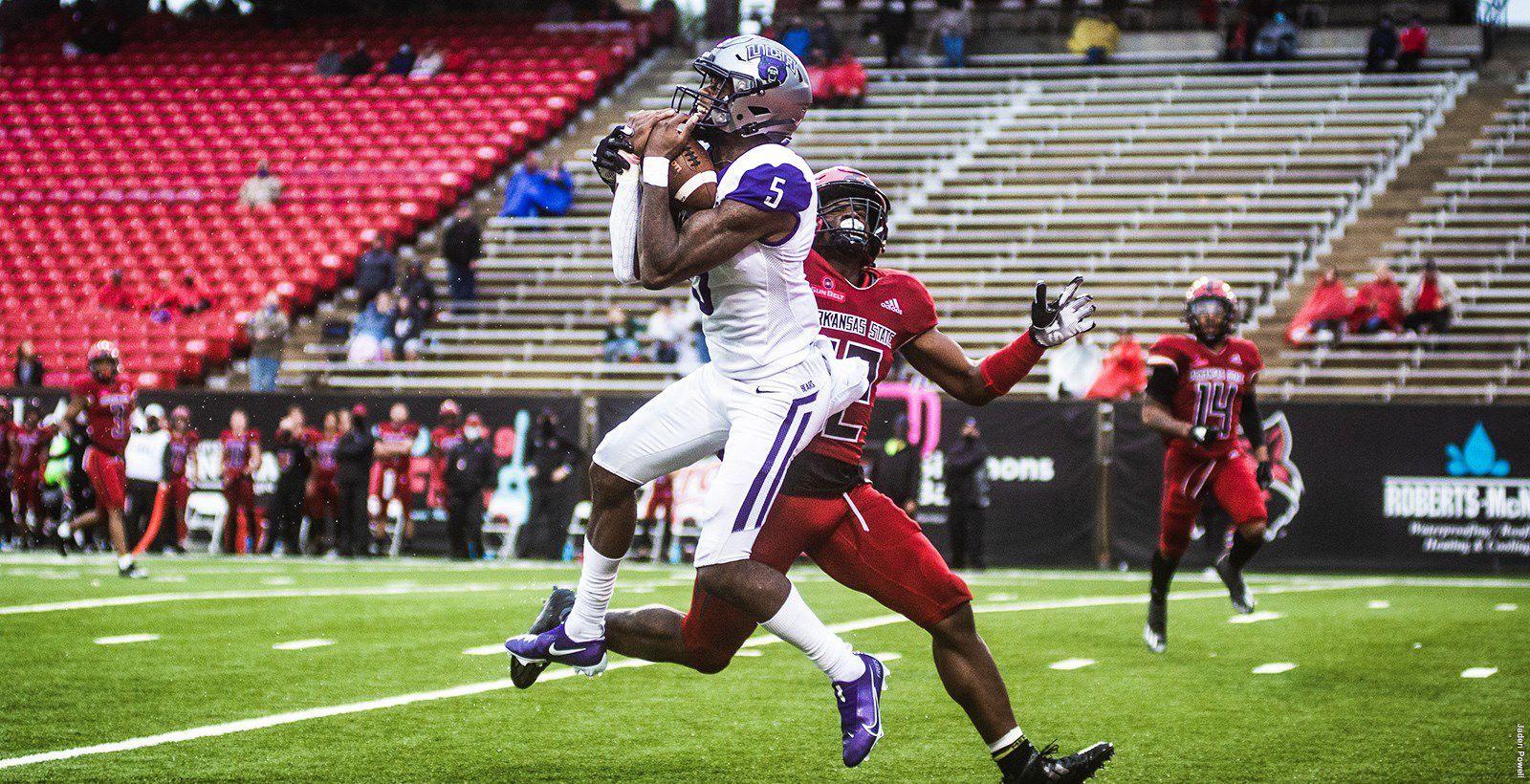 Smith, now 18, was 16 years old when he allegedly aided Mackrell in Fragstein’s strangulation death. Fragstein was shopping outside at TJ Maxx & HomeGoods on July 7, 2018, when the two allegedly abducted her. Mackrell admitted to killing the 72-year-old woman during his capital murder trial and was sentenced Wednesday to life in prison without the possibility of parole. He was also found guilty by a Faulkner County jury of kidnapping, aggravated robbery and theft of property and respectively sentenced to 30-, 40- and five-year sentences that Circuit Judge Troy Braswell ordered to run consecutively.

With the younger Pine Bluff resident’s trial started “only a couple of weeks” after Mackrell was sentenced to life in prison, Smith’s attorney said he is concerned with hou “publicized in the news” Mackrell’s trial was.

As of press time Friday, a decision on Bloodman’s case had not been made.

The capital murder case against Smith is scheduled for Nov. 2-6. Because he was 16 years old at the time of the alleged offense, he cannot face the death penalty. Prosecutors sought the death penalty in Mackrell’s case. However, a jury of eight women and four men ultimately sentenced him to life in prison.

Smith and Mackrell traveled to Conway from Pine Bluff on July 7 2018, so that Smith’s mother, LaTasha Smith, could play bingo. Mackrell had testified during his trial that the cousins decided to visit the various stores at the Conway Commons shopping center while Smith’s mother played bingo.

Mackrell’s defense team – William “Bill” James Jr. and Jeff Rosenzweig – pleaded from the beginning of Mackrell’s trial for a life sentence. The defense team had said it didn’t want to see anyone else die in this case and pointed out Mackrell’s traumatic childhood.

Mackrell was born with crack-cocaine in his system because his mother abused drugs. She continued to do so after he was born, so his father decided to step up and raise him. Henry “Jack” Mitchell was 62 years old when Tacori was born.

Henry had previously been charged with first-degree murder but was convicted of manslaughter in 1990, Rosensweig said. The defense team also pointed out that at one point in 2013, Tacori and his father were both behind bars in the Jefferson County Detention Center. It was the first time Tacori was in legal trouble. However, from there, he was in an out of trouble and eventually served more than one year in the Division of Youth Services.

Tacori told jurors his father was mentally and physically abusive, often calling him a “crack baby” and forcing him to learn how to drive at a young age. The now-20-year-old said his father would take him to bars and pool halls when he was younger. Tacori was 8 years old the first time Henry made him drive home because the father was intoxicated, Tacori testified.

Following his arrest in 2013, Tacori stayed with one of his sisters, Tina McCoy Mitchell, when he wasn’t detained at a DYS facility. After he was released from the juvenile program, Tacori went back to McCoy Mitchell’s home, where he stayed from September 2017 to his 18th birthday in December 2017. When he turned 18, Tacori left to stay with a girlfriend.

Tacori briefly moved to Texas before coming back to Arkansas and staying with Smith and his family.

A state medical examiner said some of the injuries Fragstein sustained were consistent with “stomping” injuries. The 72-year-old Wooster woman suffered eight broken ribs, a crushed throat and had a cracked cervical vertebrae. Fragstein’s body was found in a swampy area by a farm off Gibb Anderson Road in rural Jefferson County.

Mackrell testified that Smith was driving the Wooster woman’s vehicle and told her how to get to the farmland where his father once worked so that they could dump her body. Jury selection in Smith’s case is currently scheduled to begin at 9 a.m. Nov. 2.

The Festival of Chairs will look a little different this year but will still be a night to celebrate the work of the Children’s Advocacy Alliance (CAA), buy fabulous auction items, enjoy a fashion show and hear from the Champion of Hope.

The festival is virtual event this year in light of the novel coronavirus pandemic. Virtual attendees can tune in on YouTube from 6-7:30 p.m. on Oct. 22. The registration link for the auction is available on the CAA website, www.hopeandjustice.org.

This year, the festival will also be a free event.

“While we will miss seeing everyone in person, we hope that having the event virtually will allow more community members in our five-county service area to tune in and learn more about our mission, and help us raise critical funds to support the increase in children currently being served,” CAA Executive Director Tess Fletcher said.

The CAA is serving about 50 percent more children than it did last year, and unfortunately is providing services means expenses are running higher as well.

The organization is looking forward to the Festival of Chairs event as the biggest fundraiser of the year.

“Festival of Chairs is always such an important event for CAA – both for awareness and in raising funds needed to serve kids,” Jennifer Morehead, CAA board chair, said. “But this year it is especially critical because COVID-19 had a significant impact on our spring fundraising efforts, and because child abuse doesn’t stop due to a pandemic and sadly we’re seeing more children than ever who need us.”

The fashion show will showcase outfits from JC Penney’s, E. Leigh’s, Bell & Sward, Southern Savvy and The Royal We.

The event will also feature a special remembrance of former board member Cody Sublett. This year’s Champion of Hope, Madison B., will share a summary of what the CAA has done for her.

The auction will be available for a full week before the event, and registration is required to bid on any item. Included in the auction are 90 items, ranging from gift certificates to local restaurants and also a kayak. Guests can look to the website, www.hopeandjustice.org, and the Children’s Advocacy Alliance social media outlets for ways to view it live stream.