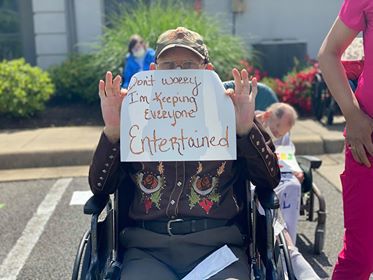 One resident holds up a sign Wednesday assuring his family and others that he’s helping to keep other residents on their toes during the pandemic. 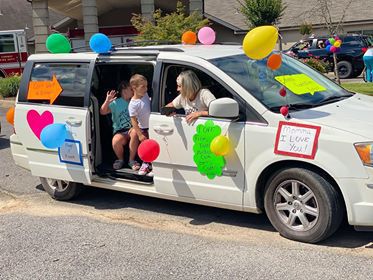 Family members were excited to write encouraging notes and display their messages with posters and also decorate their vehicles with balloons during the parade. 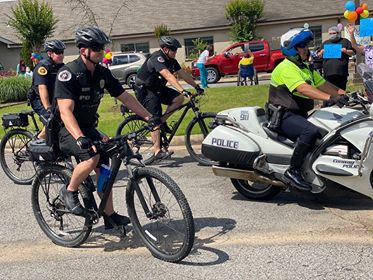 The Conway police and fire departments both participated in Wednesday’s parade for St. Andrews Place. 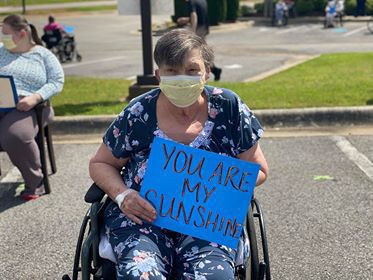 One woman proudly holds up a sign that reads: “You are my sunshine” to her family and others participating in the parade.

One resident holds up a sign Wednesday assuring his family and others that he’s helping to keep other residents on their toes during the pandemic.

Family members were excited to write encouraging notes and display their messages with posters and also decorate their vehicles with balloons during the parade.

The Conway police and fire departments both participated in Wednesday’s parade for St. Andrews Place.

One woman proudly holds up a sign that reads: “You are my sunshine” to her family and others participating in the parade.

St. Andrews Place Therapy and Living Center residents cried tears of joy Wednesday after they were able to see their family members’ faces for the first time in two months.

The facility organized a parade to lift the residents’ spirits. However, the organizers had no clue the event would tug on their emotions as much as it did.

Yvette Jackson, the activities director at St. Andrews Place, spent two days reaching out to the 66 residents’ family members to let them know about the event. Jackson also reached out to the Conway Fire Department and Conway Police Department to help make the parade as lively as she could.

Organizing the parade was a way to boost morale at the senior living center, Jackson said, adding that the residents have been unable to have in-person contact with their families since health and safety procedures became stricter in the midst of the novel coronavirus pandemic.

“They haven’t seen their family members; they’ve only seen them from the windows,” she said.

Nearly everyone involved (St. Andrews Place staff, residents, family members and other parade participants) cried as the event took life, Jackson said, adding that a man who was not involved in the process witnessed the group setting up for the main event and asked if his family could also participate.

“A complete stranger pulled up as we were in the process of getting everyone outside and asked what we were doing,” she said. “He said: ‘I’ve never seen something like this before’ and asked if he and his two little boys could join too.”

St. Andrews Place Marketing Director Heather Sue said the amount of participation that went into making this event possible for the facility’s residents was overwhelming.

“I don’t think three was a single person there that wasn’t moved by the experience,” Sue told the Log Cabin Democrat.

Resident Noah Sharpe said he will not forget the experience anytime soon.

“I loved it. The little children got beautiful and the elders had a lot of fun,” the 76-year-old man, adding that it was clear those participating in the parade were also “rooting for the caregivers.”

The event was particularly moving for one Perry County woman. The Toad Suck resident said it was the first time she’d seen her mother and brother’s faces in two months.

Michelle Baxter’s mother has lived at St. Andrews Place for about five years. She said her brother moved into the facility nearly two years ago after he suffered a massive stroke.

“It was the first time I’ve seen their faces in two months,” she said Friday afternoon. “Honestly, I’m just so glad [the facility’s staff] is doing everything they can to keep [the residents] safe. I’m just beyond grateful for the parade.”

Jamie Martin, who works as a home health specialist for Kindred at Home, also participated in Wednesday’s parade.

The home health specialist said she assists many of the former residents when they transition from therapy to living at home again. Martin said she decorated her Jeep with balloons and signs featuring encouraging messages for the residents and staff. However, she said she did not expect such a “huge” turnout.

“I noticed that everyone had a smile on their face from those participating in the parade as well as the residents … even those passing by were smiling and waving,” Martin said.

Overall, the caregiver said it was “absolutely amazing” to see the community come together in support of the residents, family of residents and St. Andrews Place Staff.

Seeing the residents lined up outside was encouraging, but even more moving for Mayflower resident Tammy Lee when she saw her own mother waiting to see the show.

“That was the best thing … I haven’t seen [my mother] since this all started,” Lee said.

Not only was she glad the residents were able to get outside and see their families, but Baxter also told the Log Cabin she was proud of the facility’s staff for having the residents practice social distancing guidelines during the event.

“They took every precaution they could,” she said. “All were 6 feet apart and wearing masks.”