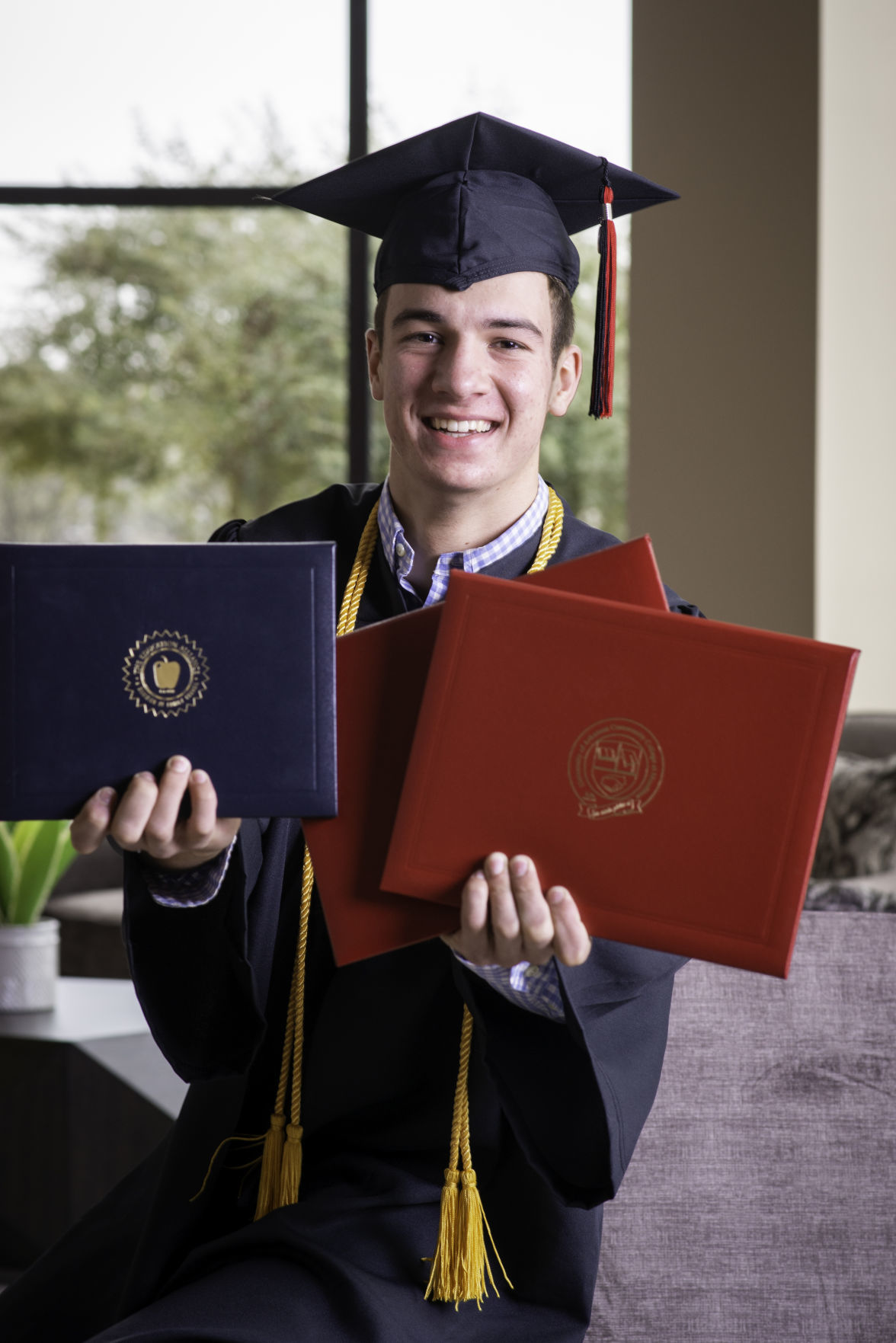 Garrett Pendergraft, 18, has a 4.0 GPA and scored a 33 on his ACT. The home-schooled senior will finish his high school career with two associate’s degrees. 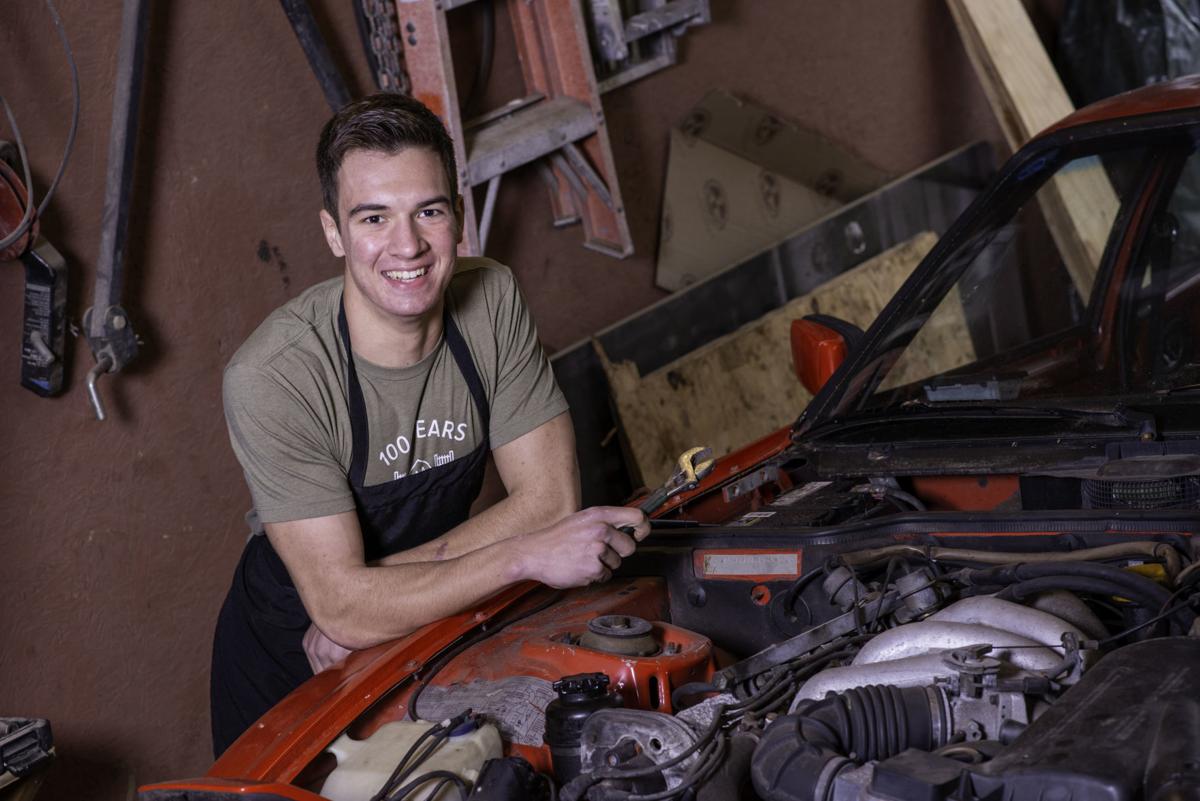 One of the teen’s many hobbies includes working on vehicles.

Garrett Pendergraft, 18, has a 4.0 GPA and scored a 33 on his ACT. The home-schooled senior will finish his high school career with two associate’s degrees.

One of the teen’s many hobbies includes working on vehicles.

Garrett Pendergraft was 17 years old when he earned his first associate’s degree. Though he is home-schooled, he is among thousands of other students whose senior year was affected by the coronavirus outbreak.

The now 18-year-old Conway resident has enjoyed performing alongside the Conway High School Orchestra and was looking forward to a trip to Dallas, Texas. However, the orchestra trip was canceled amid the COVID-19 pandemic. He also will not be able to perform in his senior orchestra concert or attend the annual awards ceremony.

Participating in the CHS orchestra allowed Pendergraft to practice and perform alongside other young musicians through the years.

“I started playing the violin when I was 7 years old. I took lessons and practiced daily. I was a pretty good violinist, but playing alone all the time was loosing it’s appeal,” Pedergraft told the Log Cabin Democrat. “Playing in an ensemble or with a group is much more fun. When I realized I could play with the CHS orchestra, I tried it and absolutely loved it. I began playing with them in the 9th grade and was hooked. I am thrilled to be a part of such a great orchestra program.”

The Conway teen was also an avid triathlete for several years and participated in the Aquakids program.

As a local home-school student, Pendergraft was able to participate in various CHS sports.

Of the teams he joined, he was most passionate about being a part of the cross country team, he said.

“Since I was already part of a swim team and the orchestra, I thought I’d try swimming for the CHS swim team. Same thing with cross country. I was already running on my own or with a private coach for triathlons so joining the cross country team seemed like a good idea,” Pendergraft said. “Orchestra was undoubtedly my favorite activity with CHS, but cross country was my favorite sport. I enjoyed the other team members and felt like I contributed to the team.”

Because he was home schooled, the Conway teen’s schedule was flexible and he was able to focus on his interests.

“I was able to push myself according to my full potential,” he told the Log Cabin. “My subjects and learning were also more personalized to what I was interested in. For example, for history, instead of reading a textbook, I was able to read literature books about certain periods of history and spend more time on the era that interest me the most.”

When learning new mathematical concepts, Pendergraft said he felt he had an advantage because he could spend more time figuring out concepts he did not immediately grasp and less time on equations he learned quickly.

Being able to personalize his schedule was a nice perk, too, he said.

“We typically started our school year during the summer and worked through many school breaks which enabled us to finish up our school year in March,” he said. “Because my brother and I were national junior elite triathletes, we were then able to focus on training and competing on the national circuit for triathlons. We were also able to do many other enrichment activities, classes and volunteer for programs.”

When he was in the ninth grade, the Conway teen enrolled in a few courses at the University of Arkansas Community College at Morrilton. His mother encouraged him to enroll to teach him to be accountable.

“She thought it would be a good experience to transition from homeschooling to college. Plus, sitting in a class with an instructor was much more interesting than reading a text book about a subject I wasn’t particularly interested in,” Pendergraft said. “I didn’t actually plan on earning an associate degree, but my mom just kept enrolling me in more and more classes each semester which would count toward my required classes for high school and before long, I was just a few classes away from an associate’s degree in business so I added those.”

The 18-year-old student earned his first associate’s degree when he was in the 11th grade. Next month, he will graduate from UACCM with his second.

Kim, who is Garrett’s mother, said she has homeschooled all her children since her oldest son was younger.

“Although I didn’t understand it, I felt the Lord called me to home school all my kids,” she said.

The Conway woman said she pulled her oldest son, Bryan, out of grade school and noticed early on that he was “learning so much and very quickly.”

“Once we got a few years into homeschooling and I was able to see all the options we had to accompany and enhance what we were doing at home, homeschooling just seemed like the best educational option for our family,” Kim told the Log Cabin. “It also afforded them the opportunity to train and compete in triathlons on a national level. They tried other sports, different musical instruments, youth groups, etc. and I didn’t feel our family time was compromised or my children’s schedules were overloaded.”

The Pendergrafts have also fostered several children through the years.

Though the children in foster care were required to attend public school, Kim said that she was able to focus on her children’s studies while they were at school and then spend time with them when school wrapped up each day.

Though she felt a calling to home school her children, Kim said she did not always view the practice as a positive thing. Though the years, her opinion on the matter has shifted significantly.

“Home schooling is often viewed negatively by many people. Embarrassingly, I too used to think negatively of ‘homeschooled families,’ but now I know there are so many more options available to families who seriously choose to home school,” she said.

Knowing he will walk away from his high school career with two associate’s degrees under his belt is a rewarding feeling, Garrett said.

“It will put me further ahead in my education so I can enter the workforce sooner and do what I ultimately want to do in my career,” he said.

The Conway teen plans to attend John Brown University in Siloam Springs to earn a degree in construction management.

The 18-year-old also runs his own landscaping business – Garrett’s Lawn Service Plus.

Before starting his own business, Garrett said he mowed lawns with his brother.

“I started mowing yards with my brother when I was about 14 and it has now gone to me owning professional equipment and mowing for about 15 regular customers,” he told the Log Cabin. “I service all of Conway and the Greenbrier area. I mow, weed eat, mulch, clean gutters, trim bushes/trees, haul off waste, plant bushes/trees and I’ve even been known to hang Christmas lights.”

Anyone interested in his lawn care services can call him directly on his cell phone (501-269-1969), Garrett said.

Kim said she believes her son is “very equipped to succeed in college” and that he will be able to seek his career goals upon graduation.

The activities he’s participated in through the years along with the classes he’s attended at UACCM and Central Baptist College have prepared him for his future, she said.

“I am very proud of everything Garrett has accomplished. He is thoughtful, smart, independent, driven and strong,” Kim said of her son. “He is mature beyond his years and I have no doubt God has big plans in store for him. He’s a talented musician, phenomenal athlete and wise businessman with integrity. He’s passionate about working on cars and can fix about anything mechanical.”

Garrett said he encourages other students to set goals and work toward achieving those goals. He also recommended others discover their true passions through a trial-and-error process.

“Find out what you enjoy doing by participating in different activities,” he said.