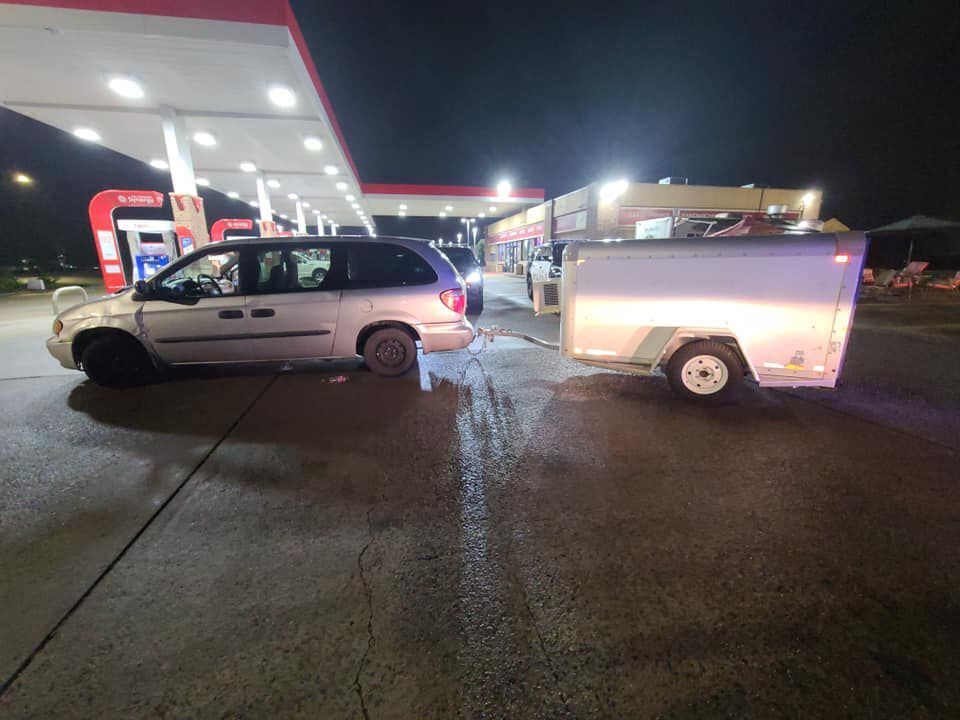 Officer William Lipsmeyer pulled over the suspect vehicle on Sept. 1 but could not verify the trailer in question was stolen.

The Conway Police Department has arrested a 23-year-old Faulkner County man in connection to a string of thefts that occurred between Aug. 17-30.

“A keen eye and teamwork helped solve [five] theft cases,” CPD spokesman LaTresha Woodruff announced Tuesday morning. “A day after officers were told to be on the lookout for a specific vehicle, Officer [William] Lipsmeyer with Your Conway Police Department spotted the Dodge Caravan towing a trailer. He alerted offices with the [Crime Suppression Unit] who located the driver.”

Detective Timothy Gray alerted other officers on Sept. 1 to keep an eye out for a silver minivan believed to be the suspect vehicle involved in all of the aforementioned thefts, according to a probable cause affidavit. The next day, officer Lipsmeyer pulled Christie over because the trailer he was pulling with his minivan did not have a license plate.

“Officer Lipsmeyer stopped the vehicle at Exxon J Square in Conway due to the tailer not having a license plate and recognizing the minivan from an earlier email I sent out,” the detective noted in his report. “Officer Lipsmeyer was suspicious of the various property within the van but could not verify the cargo trailer as having been stolen at that time.”

Authorities went to Christie’s home on Cellers Lane in Saltillo on Sept. 2 to follow up on the theft investigation.

“When we arrived, we saw a white male (presumably Jonathan) run off. We were unable to pursue on foot due to not having a good direction of travel, and the heavily wooded area that he could have run off,” Gray’s report reads in part. “While at his residence, I discovered a large burn pit in his front yard. Within the burn pit, I found a license plate for a trailer.”

Upon further investigation, the detective confirmed the license plate belonged to a trailer that had been reported stolen. There was also another tailer on scene that looked similar to the one Lipsmeyer said Christie was pulling with his minivan the night before. However, it appeared the cargo trailer “had been modified.”

Authorities went back to Christie’s home the next day but noticed it appeared as if the property was “picked up.”

“Our intent was to arrest Jonathan Christie on probable cause for theft of property due to the evidence of the stolen jet ski’s having been there and the stolen trailer that was recovered there,” Gray’s report states. “On our arrival, the minivan was gone and various items had been picked up that were present the day before.”

The detective tracked Christie down at a residence on Davis Street in Conway. After he was arrested, the 23-year-old confessed to stealing the aforementioned items, adding that “most of the property had been sold but the propane tanks and cook stove was hidden in his yard under some pallets.”

Christie is currently behind bars in lieu of a $10,000 bond and is scheduled to appear Sept. 14 in Faulkner County Circuit Court for a plea and arraignment hearing.