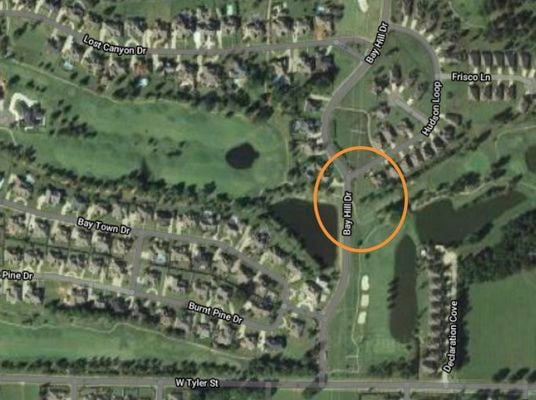 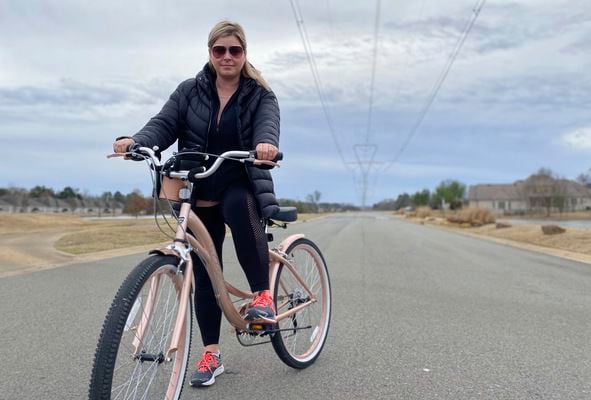 Hilary Andrews, staff photoAshley Simmons took her bike out for a ride on Bayhill Road in Conway recently and experienced several small zaps throughout her body, which were a result of building up a charge, touching the rubber on her bike and riding under power lines all at the same time.

Hilary Andrews, staff photoAshley Simmons took her bike out for a ride on Bayhill Road in Conway recently and experienced several small zaps throughout her body, which were a result of building up a charge, touching the rubber on her bike and riding under power lines all at the same time.

Conway’s Ashley Simmons has had a lot going on lately.

Between multiple surgeries, raising kids, and moving, she hasn’t had a lot of opportunity to workout.

Recently, she decided to start building strength back up in her hips and knees by taking up cycling.

What she didn’t expect was the shock she’d receive with it.

On Wednesday, Simmons decided to take her bike out for a ride around the neighborhood. She said she was feeling good so she decided to cross the road and head to Centennial in west Conway.

Most who live in the area are aware of the large power lines near Bayhill Road, but Simmons got a little more acquainted with them.

She said she began to ride directly under them when she felt a jolting zap in her finger.

“I thought a spider had bit me,” Simmons said. “It was really painful.”

A search revealed no arachnids on the bike so she kept pedaling. But, it happened again ... and again.

The overhead clouds gray and “nasty,” Simmons said she jumped off her bike fearful of getting struck by lightning or something of the like. She said she called her husband, an avid cyclist, but he hadn’t experienced anything like this before.

He did some online research and found several pieces talking about others who had similar encounters, all near power lines.

“He was like, ‘Apparently, it’s a thing,’” Simmons said. “It was so odd because I could look up and see a power line. It was so weird, and it’s concerning to me.”

While Simmons didn’t really find a good answer for the electric encounter, there are others out there that call the experiences microshocks.

According to the Energy Networks Association – and electric and magnetic fields and health – microshocks happen when a person gets charged in an electric field.

When a rider touches a conducting object they discharge. Though the amount of charge involved is small, because it’s concentrated on the small area of the skin where the contact is made, a sensation is produced like a zap discharge.

“One specific way this can happen is by riding a bicycle underneath a high-voltage power line,” officials said. “If you are in electrical contact with a metal part of the bicycle all the times, then no charge can build up between you and the bicycle, and you should not experience any microshocks.”

If a rider is electrically isolated from the bicycle, though like holding rubber handlebar grips or wearing insulating gloves, then a charge can build up.

“This can then discharge as a microshock,” officials said. “The commonest place for this to happen is either on the fingers if they brush against the brake lever, or in the inside of the upper thigh, as it comes close to the top of the seat pillar just below the saddle or to the saddle rails once each pedal revolution.”

Association officials did say the electric encounters are avoidable though. One way is for a rider to keep their fingers touching the brake level, or any other bare metal part of the bike, the length of going under the power lines.

Simmons ultimately shared her experience on Facebook and turns out, others from the Conway area have similar stories.

“So this use to happen to me in this same exact spot,” user Scott Lucas wrote. “When i was cycling hardcore I’d wear the cycling shorts and I’d come flying down that hill heading toward Tyler.

“The friction between my quads would light me up. The first time I thought a bunch of bees flew between my legs!! Then I got used to it. I would just stop pedaling when I road under the power lines.”

Another user, Mary Spears Polk, said she used to run under the power lines and was convinced it was the electric source that shorted out a pair of running headphones she used.

We want to know, has this happened to any of our readers? If it has, contact staff writer Hilary Andrews at handrews@thecabin.net.