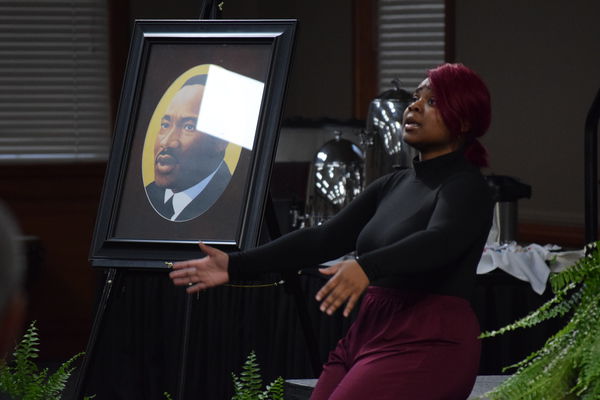 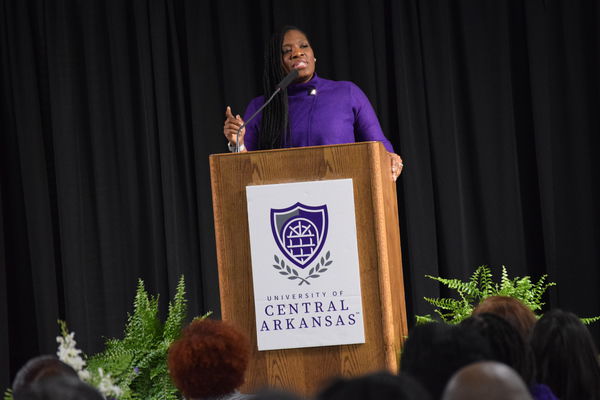 Hilary Andrews, staff photoGuest speaker Tamika S. Edwards, the executive director of the Social Justice Institute at Philander Smith College in Little Rock, spoke about the importance of remembering history and being advocates for justice during the annual Martin Luther King Jr. Prayer Breakfast at the University of Central Arkansas on Friday.

Hilary Andrews, staff photoGuest speaker Tamika S. Edwards, the executive director of the Social Justice Institute at Philander Smith College in Little Rock, spoke about the importance of remembering history and being advocates for justice during the annual Martin Luther King Jr. Prayer Breakfast at the University of Central Arkansas on Friday.

Hundreds gathered together to celebrate the life and work of Dr. Martin Luther King Jr. during the annual prayer breakfast on Friday hosted by the University of Central Arkansas.

Guest speaker Tamika S. Edwards, the executive director of the Social Justice Institute at Philander Smith College in Little Rock, told guests she’s always had a robust personality when it comes to getting behind a microphone; her voice gets deeper, the tone more smooth.

“Even while I joke, I know the seriousness of this moment,” she said. “Right now, within our country as we look to our congressional leaders as they go through impeachment trials, as we look in our various cites and think about those individuals who are living in impoverished conditions and as we think about the economic inequalities in our country and the students who are not getting a fair shot at educational opportunities, we must continue to dream but that dream must be grounded in facts and reality.”

Edwards said when it comes to remembering King, years after the civil rights movement, his work tends to get swept up into catchy soundbites and easily shareable memes. Even in preparing for Friday’s speech, she said she found herself doing the same thing.

“I wanted to impart words of hope and promise and to stir the soul to move forward and to enact a vision of progress,” Edwards said. “However, now that I am in higher education I’ve learned that we should use every single opportunity as a classroom experience, to use the platform that we’re given today, during the King holiday, we need to move forward a framework of progress and change inspired by the actual work, and I’m emphasizing these words, the actual of work of Dr. King and not the watered down version of his image.”

She said that is required.

“That we do not condense the timeline of the struggle for progress nor do we use idol words to diminish his vision for racial justice to sound bites and honorary tones without thinking about the true meaning behind his work,” Edwards said.

It’s important, she said, to go back to the foundation, look at Dr. King’s background, connect with the history and understand the events that bring together the fuller picture of Dr. King’s dream, his work and his purpose.

“This time of the year has always hovered around reflection and contradiction,” Edwards said. “Reflection because we have the opportunity to revisit Dr. King’s writings to compare his accounts regarding the state of our nation then, to what we see today.”

She posed the questions, “How far have we really come?” and “What is left to do?”

“I was 5 years old when in Nov. 1983, when former president Ronald Reagan signed into law a bill creating a federal holiday to honor Dr. Martin Luther King,” Edwards remembered. “We know that that fight and legislation did not come by easily. The same year, Arkansas required state employees to choose which day they wanted to take off. They had a choice of Dr. King’s day, Robert E.Lee’s day, or the employee’s birthday.

“Some 70 years later, after the creation of Robert E. Lee state holiday and 32 years after the legislator combined the King and Lee holidays, Gov. [Asa] Hutchinson signed into law recognizing only the King holiday on the third Monday in January [in 2017].”

The room erupted with applause.

Discussion has occurred for years about separating the holidays. The Arkansas NAACP and others said honoring King on the same day as Lee, an icon of the confederacy, was a reminder Arkansas’ history of slavery, though others said keeping the same day would honor all of the state’s history.

What Edwards said she found that the 1947 vote for Lee was, in part, an effort to push back against talk about desegregation and ending Jim Crow laws, an intimidation tool.

“This is why we have to tell the whole story,” she said. “The importance of separating the days was to remove the intimidation and to recognize that we are now desegregated in a sense.”

Raised as a “church girl,” Edwards said, she was taught not to cherry pick scripture in order to drive a point or make things look good; we must read it all in order to understand the entire text.

“In the same, we continue to fight for social injustice it is a dangerous practice to pull out the palatable parts of his memorable speech without reading, learning and understanding the works, tone of the events and other literature that make up the civil rights movement and equally the posture for his work,” she said. “I will challenge you, instead of romanticizing King’s work and collapsing the years of struggle into a neat delivery to commemorate a holiday, I challenge all of us to examine the basis of his work, to see the parallels in what Dr. King forget for then and what we continue to fight for now.

“We cannot properly push for the vision without […] telling the truth about our past. We must be truth tellers and agitators and advocates for justice.”

Staff writer Hilary Andrews can be reached at handrews@thecabin.net.