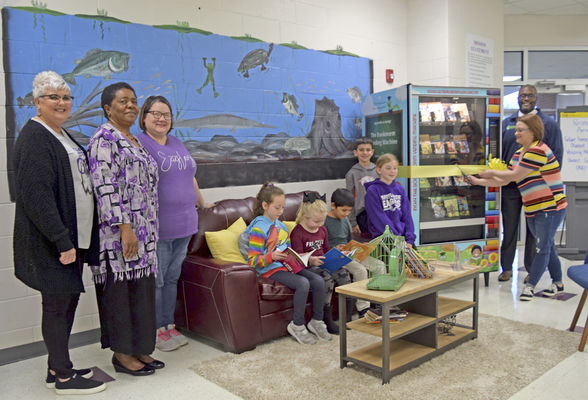 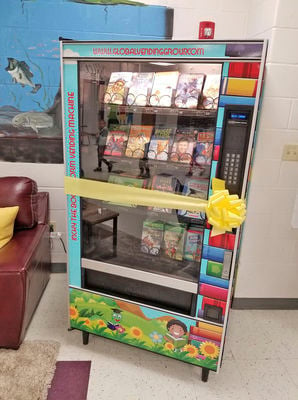 One student from each grade level will earn a golden coin each week that will allow them to select a book.

One student from each grade level will earn a golden coin each week that will allow them to select a book.

Principal Candie Watts said she was excited to bring life to the school’s book vending machine project and that children can begin working to earn books starting Monday.

The project was made possible by community donors and fundraising efforts during the school’s fall festival, she said.

The program inspires children to work hard and encourage their classmates to succeed in order to earn a golden coin. Each week, faculty will award one child in each grade level with a golden coin to use to select a book from the vending machine, which is located in the school’s main lobby.

Students can be considered for a coin by:

Elementary teachers will award one student with a golden coin at 8 a.m. every Friday.

“If you’re the winner, you will be invited to cash in your coin for a free book,” Watts said. “Other surprise staff members will also be on the look out for students who deserve a golden coin.”

Along with this reading initiative, the elementary principal said the school also purchases a book for each child quarterly.

Making projects such as this a reality is made possible through community sponsorship, Henderson said.

“Partnerships make the possibilities so much stronger,” she said. “I’m excited about being even a small part or the result of these collaborations.”

Petty said the Faulkner County Affiliate of the Arkansas Community Foundation was proud to donate $750 toward this project.

The group promotes encouraging students to read and helping them to increase their reading abilities, he said.

“As a licensed educator and a board member of the Faulkner County Affiliate of the Arkansas Community Foundation, I researched schools in the county and found that Mayflower Elementary had some struggles pertaining to this area,” Petty said. “I met with Mrs. Candie Watts and also did classroom observations with her. I determined that Faulkner County Affiliate could really help Mayflower Elementary by proving the funds to cover one [nine-week period] worth of books.”