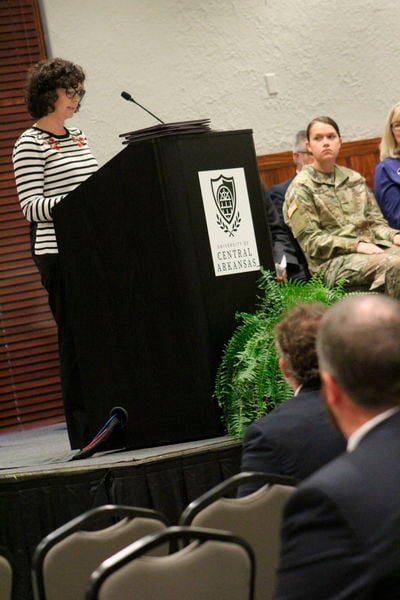 Hilary Andrews, staff photoAmanda Paladino, an employee at the University of Central Arkansas, spoke about her experience as a military spouse during UCA's annual Veterans Day celebration Friday. 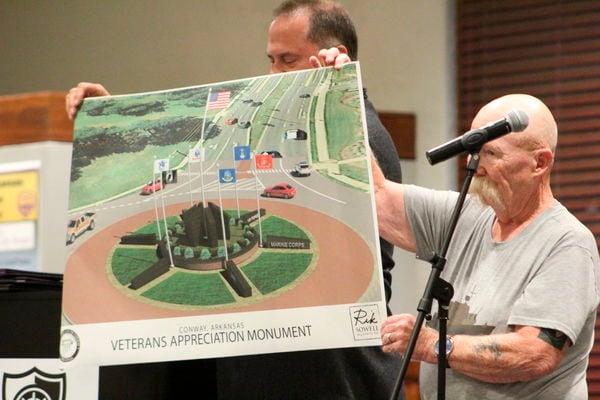 Hilary Andrews, staff photoCity of Conway Mayor Bart Castleberry, left, and veteran Mike Mason introduced plans for a new addition to the community during the Veterans Day ceremony at the University of Central Arkansas on Friday. Plans call for a veterans appreciation monument  roundabout. 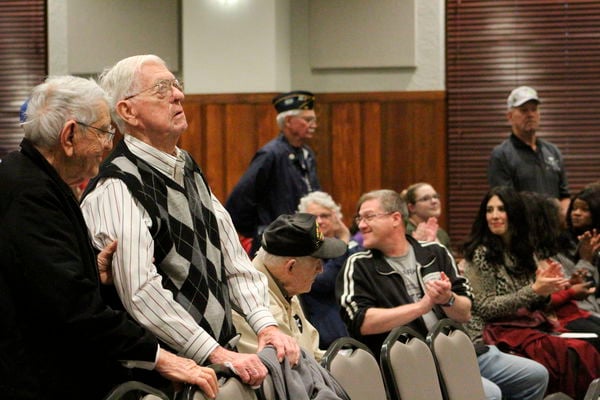 Hilary Andrews, staff photoMarches of the U.S. Armed Forces were played, veterans standing during their songs to be recognized during the annual Veterans Day ceremony at the University of Central Arkansas on Friday.

Hilary Andrews, staff photoAmanda Paladino, an employee at the University of Central Arkansas, spoke about her experience as a military spouse during UCA's annual Veterans Day celebration Friday.

Hilary Andrews, staff photoCity of Conway Mayor Bart Castleberry, left, and veteran Mike Mason introduced plans for a new addition to the community during the Veterans Day ceremony at the University of Central Arkansas on Friday. Plans call for a veterans appreciation monument  roundabout.

Hilary Andrews, staff photoMarches of the U.S. Armed Forces were played, veterans standing during their songs to be recognized during the annual Veterans Day ceremony at the University of Central Arkansas on Friday.

Many were honored during the annual Veterans Day ceremony, “Honoring the Homefront,” at the University of Central Arkansas on Friday.

As a way to show appreciation for all who have served, the city of Conway and its mayor Bart Castleberry paid tribute through a proclamation declaring Nov. 7 as Veteran’s Appreciation Day.

According to the proclamation, “it is fitting and appropriate” to recognize the many who put on the varying uniforms of the U.S. Armed Forces, ones who fought “valiantly,” and “suffered adversity and death” to ensure freedom for all, as well as the families of each.

“I urge all citizens to join with me in honoring those who have and are serving our country through military service,” the mayor said.

Furthermore, Castleberry also announced a new addition to the city that would also serve as a way to honor veterans, bringing

Mike Mason, a friend and veteran, up to the stage.

He said they were drinking coffee one morning and talking about what else they could do.

“He started kind of sketching on a napkin and then he brought his sketch to the office,” Castleberry said. “This is something that the city council has embraced.”

Friday was the first time that the mayor and his team unveiled plans for a new veteran’s roundabout in Conway that will have a flag for each branch of the military, the U.S. flag and the P.O.W. flag. Hoping to put it at Prince and Farris.

“I hope everyone likes it,” he said.

During the event, the band present also played the marches for each branch and veterans stood for recognition, as they do every year, receiving applause as they rose from their seats.

Guest speaker Amanda Paladino, a UCA employee, also shared her experience as a member of the U.S. Air Force and as a wife of pararescueman, Corey, the two meeting while serving, then taking on the role as a military spouse moving across the globe to Kadena Air Base in Okinawa, Japan where the family spent three years before moving back to the U.S. at Pope Army Air Field in North Carolina.

Amanda currently works as the concurrent enrollment coordinator in the UCA Office of the Registrar.

“I would to start by saying my story is not the only one,” she said. “There are many who have come before me and many who have come after me who have their own story to tell and I very much feel the weight of representing such a large and diverse group today.”

Amanda recognized that families includes not just spouses and children but moms and dads and siblings of military members who all have their own stories as well, unique each their own.

She said what her bio didn’t tell those present to read it was the many things she learned along the way and she wanted to share her experiences at home, which included having to learn how to own it all while her husband was gone on deployment, which included taking care of that flat tire that would inevitably happen as soon as he left or the broken-down washer.

“It is those types of things that have you feeling like the world is against you,” Amanda said. “Those are the ‘kick you when you’re down days,’ that can take a toll. However, it is in these scenarios that you can learn so much about yourself and your capabilities. You can let yourself be frustrated and give up or you can realize nothing is going to get done if you don’t do it.”

This proficient, “go getter,” attitude also led to mixed emotions when Corey came home, the routine the family relied on disrupted, everything thrown into chaos by his return. She said they would have to learn how to coexist in the same space again and be on the same team once more.

“It was hard to turn the switch off sometimes and release control, but what I learned and would try to remember is he was probably going through some strange emotions also, and with a little time and patience and grace, we would eventually find our normal,” Amanda said.

In addition to UCA’s ceremony, many more across Faulkner County have made plans to recognize veterans:

n Veterans Day Assemblies hosted by Conway Public Schools and the Conway High School JROTC (Junior Reserve Officers’ Training Corps). The first ceremony will begin at 9 a.m. and the second will begin at 12:45 p.m., both – free and open to the public – on Nov. 11 held in James H. Clark Auditorium.

n Disabled American Veterans Organization, John H. Dunn Chapter No. 10 in Conway, Arkansas to host a 2019 Veteran’s Day Pancake Fundraiser from 8 a.m. to 1 p.m. Nov. 10 at Stoby’s Restaurant in Conway. We want to invite all of Faulkner County to come, ‘Be Our Hero,’ support your local veterans and celebrate Veterans Day weekend with us. During the Sunday event, the UCA ROTC and Conway High School ROTC will present the flags and local dignitaries and veterans will share stories as the group raises money to support our local veterans. To purchase tickets, visit www.bit.ly/2N6JA8H

n A veterans ceremony at 10 a.m. Nov. 11 at Superior Health and Rehab.

n A Veterans Day Celebration at 9 a.m. Nov. 11 at Julie’s Sweet Shoppe and Bakery in Conway.

Staff writer Hilary Andrews can be reached at handrews@thecabin.net.