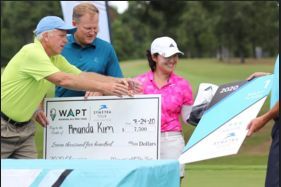 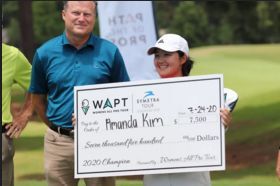 Kim was named the first-place finisher after scoring 215 at the end of the tournament and was awarded $7,500.

Kim was named the first-place finisher after scoring 215 at the end of the tournament and was awarded $7,500.

Kim won with a score of 215. This win awarded her $7,500 and allows her to compete in the Symetra Tour later this year.

This is the second tournament Kim has won, and she said she plans to keep pursuing a career in golf.

“In women’s pro golf, there’s the Ladies Professional Golf Association tour, below that is a tour called the Symetra Tour, and below that is this [tour],” Conway Open Tournament Chair Pete Tanguay said.

There were 42 players in the tournament. Tanguay said most of the women in this tournament are a few years out of college and want to play in the Ladies Professional Golf Association.

“They come and play these tournaments to try and work their way up,” he said.

This tournament did not occur without some obstacles. It was originally scheduled for April, but it was pushed back due to the pandemic.

“It was unfortunate that we didn’t have that fourth day,” Kim said.

Despite the obstacles faced, the tournament was able to raise around $30,000 for the Arkansas Community Foundation.

“The money we raised net from our expenses will go into the community foundation into an endowment fund that will give to the non-profits in this community forever,” Tanguay said.

For more information about the Womens All Pro Tour, visit https://wapt.golf.