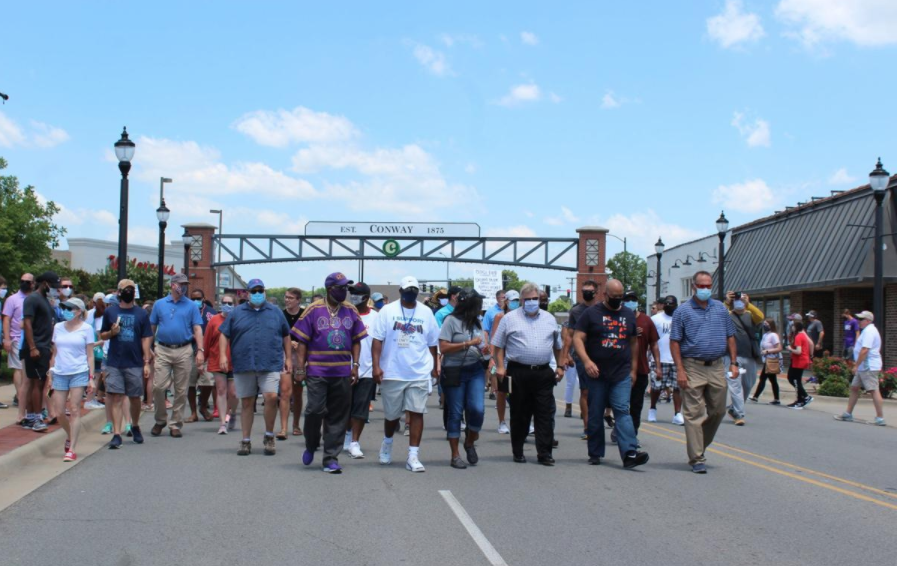 In this photo from June 7, 2020, Mayor Bart Castleberry (far right) and Pastor E.C. Maltbia (second from right) lead hundreds of Conway residents in a March for Unity through downtown Conway. 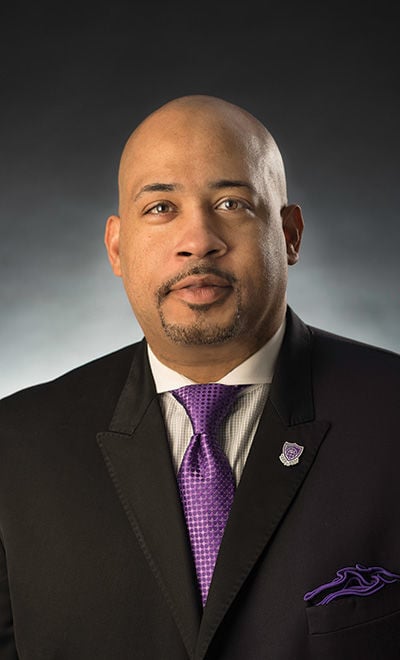 In the news business, some names seem to come up frequently. Oftentimes, these are names of elected officials, superintendents, university presidents, etc. Always, they are the names of people who are leaders in the community.

Pastor Everette Cornell “E.C.” Maltbia is one of those names.

Maltbia was born and raised in Conway. He is the founder and senior pastor of True Holiness Saints Center in Conway, where he has served for more than two decades. He was ordained at the age of 19, and started True Holiness Saints Center on July 4, 1993, at age 21. The day after that, he married his high school sweetheart, Natasha. The couple will celebrate their 28th anniversary on July 5. They have two children, Kennedy and Connor.

Maltbia’s reach extends far beyond the church walls. He is passionate about education, health care and civil rights, and he puts the time and energy into those causes.

In January 2017, Gov. Asa Hutchinson appointed Maltbia to serve on he University of Central Arkansas Board of Trustees, saying that Maltbia would bring an important perspective to the board.

“For years, he has been a pillar of service and leadership in the central Arkansas community. His engagement and personal involvement with the staff and students at UCA will make him a great asset to the UCA Board of Trustees,” the governor said.

Maltbia has served on the Conway Regional Health System Board of Directors since 2010. Prior to that, he served for years on Conway Regional’s Community Advisory Board.

Maltbia served as chaplain for the Arkansas House of Representatives in the 87th General Assembly in 2009, and is the current chaplain of the Conway Police Department.

He and former Conway Mayor Tab Townsell formed the Conway Community Race Relations Initiative in 2017. He continues to be an advocate to improve race relations in Conway. Maltbia and Mayor Bart Castleberry led the city in a Community March for Equality in June 2020.

“Pastor Maltbia and I have worked together for many years. We have discussed city business, politics, our faith, our families and our city,” Mayor Bart Castleberry said. “Pastor’s word is his bond. Anything he tells you he’g going to do, he will see it through. One thing that impresses me the most about him is his unique way of connecting with college students.”

The mayor added his only criticism of Maltbia with a laugh.

“The only negative thing I can say about Pastor Maltbia is that he can’t pick professional football teams, mainly the Washington Football Team,” Castleberry said, before turning serious again. “Pastor and I have a great relationship because we both serve a mighty God.”

True Holiness Saints Center’s mission statement is two-fold: to empower people spiritually, physically and economically and to impact the community.

Maltbia, through his leadership, hard work and perseverance, helps the church achieve that mission.

Each year in August, the church hosts a citywide Fall College Day to welcome new students to the area. The event is attended annually by presidents of UCA, Hendrix and CBC as well as several elected officials, local law enforcement, area business leaders and more.

College Day at the church celebrated its 20th annual event in August 2015. Gov. Asa Hutchinson was among the guest speakers at that event. The governor is also a frequent guest at the church’s annual Good Friday luncheon that began in 2002. The last two years, the event has had to scale down due to the pandemic restrictions.

True Holiness Saints Center is more than a church. Like its leader, the church has become a staple of the community.