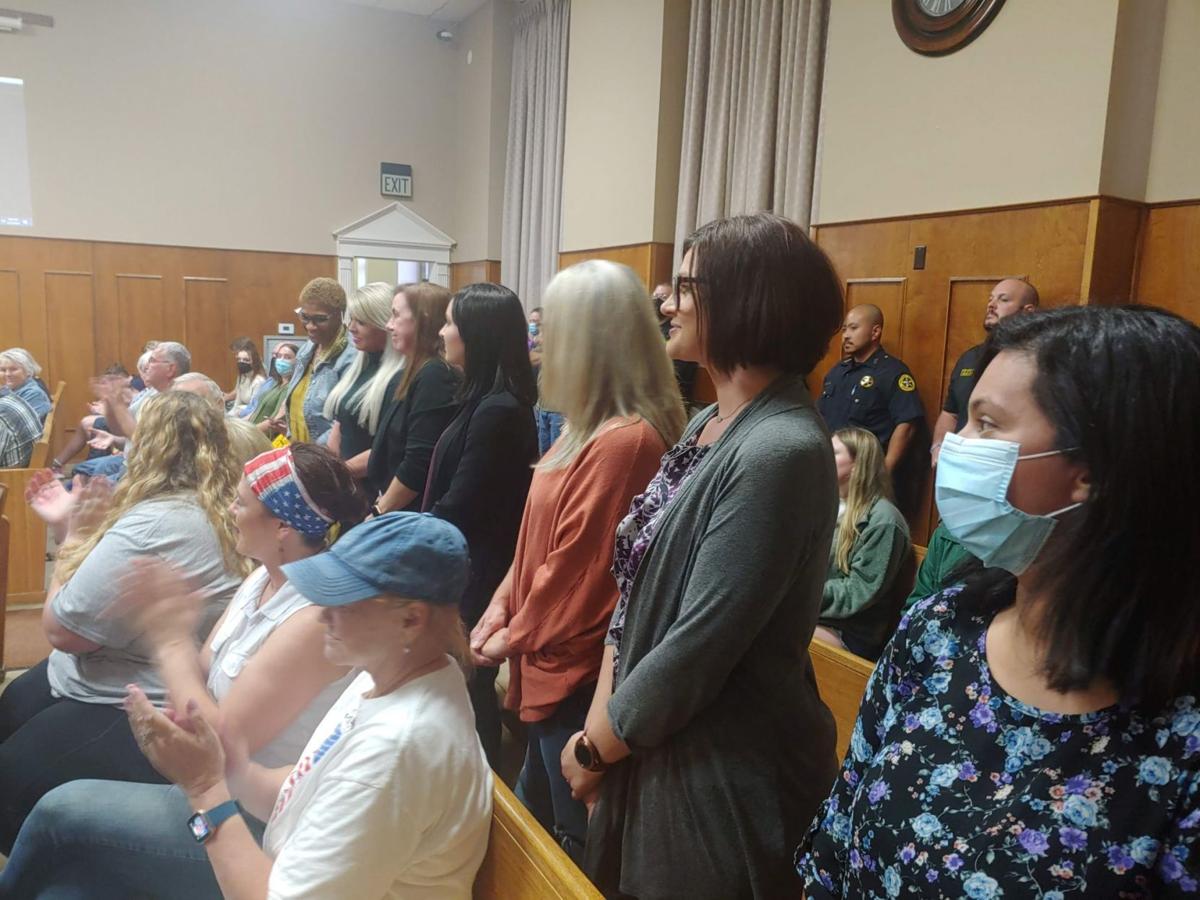 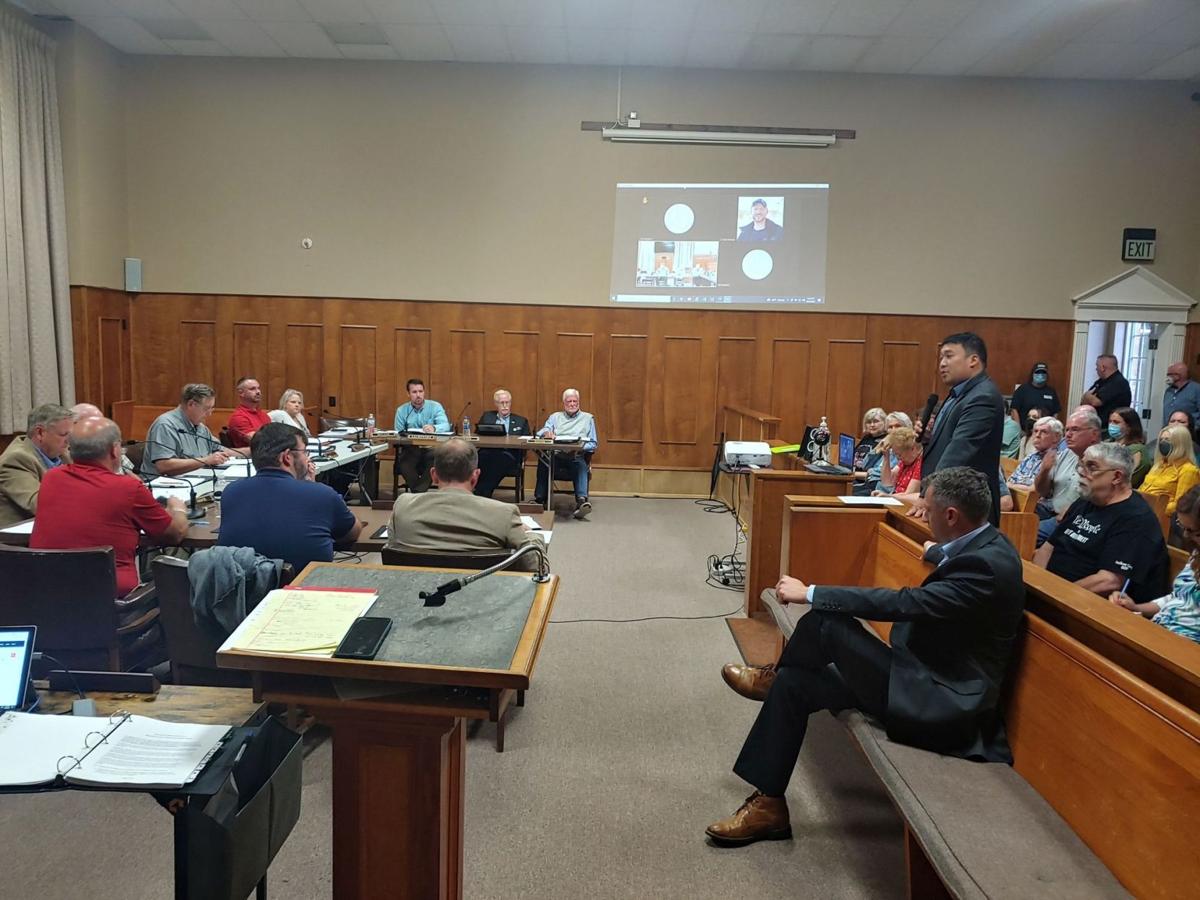 The Faulkner County Quorum Court voted in favor of the county being a pro-life county and reviewed COVID-19-related performance bonuses for county employees during its regular meeting Tuesday.

Also Tuesday, maternity leave policy, in debate since May, began its initial steps toward passage; payment to Friends of the Faulkner County Animal Shelter for services assisting the sheriff was passed, after debate; an update of county dispatch job titles and pay was also passed, having been first submitted in early summer, with indications that sheriff’s department pay scales would continue to need address.

The pro-life resolution was first introduced at committee meetings Sept. 14 when Justice Kris Kendrick, the resolution’s sponsor, proposed it to the Courts & Public Safety Committee, which approved it to move to the court.

The floor was opened for public comment prior to debate by the court. The standing-room-only gallery had several people who had come to speak in support of or against the resolution.

Section 1: It is the policy of Faulkner County, Arkansas to promote and protect the dignity and humanity of all persons at all stages of life from conception until natural death.

Section 2: The Faulkner County, Arkansas declares itself to be a pro-life County.

Faulkner County Judge Jim Baker asked that public comments be held to two minutes. Comments, rather than speaking to the resolutions itself, frequently centered on abortion and abortion politics.

Public comments were led by Ken Yang, Arkansas Republican County Chairman’s Association president and Saline County Republican Party chairman. Yang spoke in favor of the resolution, reminding that Arkansas Act 322, passed at the last legislative session, allowed communities to make a pro-life declaration, as well as cautioning Republican members of the court what their vote expectations were for the resolution.

“Just hiding behind the letter R is no longer an option,” Yang said.

This was later countered by the shortest public comment, by Ian Buchanan, who said, “You’re just working for the Republican Party” to the court.

Other comments for/against the legislation:

Debbie Plopper (from a prepared statement): “Why do we need to project the image of close mindedness? … We should not be the Quorum Court Church of Faulkner County.”

Ashley Hansen: “This is really going to instill a lot of fear.”

Treci Buchanan, who also spoke when the resolution was proposed in committee: “You’re not going to support the voice of your female population,” and “in my scripture, there’s not judgment there.”

Faulkner County Republican Women member Erita Smith: “Abortion is murder,” and to the gallery, “If you’re Christian it’s the wrong thing to do.”

Public comments continued for an hour, with approximately 16 people speaking. Court members speaking when the resolution came up for vote near the end of the evening’s proceedings, included resolution sponsor Kris Kendrick: “For too long this country has not protected life. ... Protecting life is not controversial.”

Justice Rose Roland: “Murder, is that a choice?”

Justice John Allison, after reading from an extended statement which invoked Virginia abortion law and the so-called partial birth abortion, asked about leaving babies “to die on a cold metal table” and said “We are in a culture war.”

Justice Tyler Pearson said he would not vote for the resolution, citing its vagueness.

The resolutions passed, with two “no” votes by Pearson and Justice John Pickett.

A proposed bonus for county employees who worked through the COVID-19 pandemic was tabled by the court, meaning it will return to committee, likely for further refinement before it returns to the court.

The bonus was tied to the federal $24.3 million American Rescue Plan package for the county, which, in its strict and still-forming usage rules, included being able to be used for premium pay for affected workers. When the ordinance was first proposed in committee other counties using the fund for premium pay was cited, with $1.4 million planned for county bonuses for $5,000 per employee.

Several justices spoke against the ordinance, including Allison who said the $5,000 per employee amount “seems a little steep” compared to what he understood had been awarded to employees elsewhere, including private sector employees.

Justice Rose Roland said that some county employees were more outward facing than other county employees during the pandemic, such as sheriff’s deputies, versus those who worked in departments who were sent to work from home “in their pajamas.” She asked that the money be redistributed with higher benefit to deputies and the coroner and lower for other employees.

“I didn’t get to work from home,” Roland said.

Justices Tyler Lachowsky, Samuel Strain and Matt Brown spoke to the nature of the money, since it being federal sourced would make it a financial burden “for our children and grandchildren.”

“We should call this [American Rescue Plan] the ‘Mortgaging Our Children’s and Grandchildren’s Future Fund,’” Brown said.

Judge Jim Baker, indicating some frustration with the debate, pointed out that the $5,000 bonus amounted to a $1.80 benefit to employees.

“I don’t figure that’s too much,” Baker said. He later pointed out that employees received a 1 percent raise the previous year, below the rate of inflation.

Justice Justin Knight asked Baker what projects were in store for the remainder of the rescue plan money, and Baker shared a list with the group, telling them “None of this will happen without your approval.”

It included 25 percent of the fund being used for broadband expansion in the county, as well as money for drainage projects, sewer projects, criminal justice including 911 and detention center upgrades, community support such as food insecurity, with 12 percent of the money held in reserve.

“If we don’t spend this, we have to send it back,” Baker said.

Ultimately Lachowsky moved to table the ordinance and send it back to committee, which was passed with majority vote.

The Maternity Leave ordinance, a topic of debate in the court since early summer, was given its first reading.

When justices learned that at least two employees in the county were expecting November births, a motion was made to waive at least one of the three required readings so the policy could be in place in time for the employees to take advantage of its time-off provisions. This failed, narrowly.

Roland and Kendrick also expressed concern that the maternity leave on top of other time-off options for employees could allow an employee to have above-what-the-court-intended time off. Roland and Kendrick stated there was time for a second reading at the October meeting and still make the November birth, in effect, deadline.

An extended debate took place over justices being asked to approve an ordinance paying $4,545.52 to the Friends of the Faulkner County Animal Shelter for services rendered.

Justices learned the fee arrived from the sheriff’s office calling the Friends group for assistance after 65 dogs were recovered from a home in April. Twenty of the dogs died, Baker told the court, with the remaining 45 being put under care by Friends. As of the Tuesday night meeting, all but one of the 45 dogs had been adopted, he explained to justices, adding that the expense, for vet bills, did not match what it cost Friends.

“I can assure you it was more money than this ordinance says it was,” Baker said.

Justices, beginning with Lachowsky, expressed concern that covering fees could set a dangerous precedent. Lachowsky cities his work with scouting groups, and how when they go out for ice cream he pays.

Roland was concerned that the funds, drawn from the shelter voluntary tax, would “create a slush fund” for others who wanted to bill the county.

This was countered by explanations, first by Sheriff Tim Ryals who explained how his department reached out for help after the dogs were recovered, since it had no real place to keep or care for the animals.

County Attorney Phil Murphy explained to the court how the sheriff’s department reaching out to Friends created “agency” for the group, which would be different than a random request.

Allison and Roland led the voices concerned about precedent, after Ryals and Murphy spoke.

The ordinance passed, with Lachowsky, Allison and Roland voting “No.”

An ordinance adding job titles, and raising pay for county dispatch operators passed. Justices heard from sheriff’s department Fiscal Officer Angie Wooley that the raises did not match raises recently passed by the City of Conway for its dispatchers. Further, Wooley told justices, her pay scale review submitted to the court showed that department pay scales were low across the board for the department.

All 42 positions need a “significant” raise to reach scale, Wooley told the court.