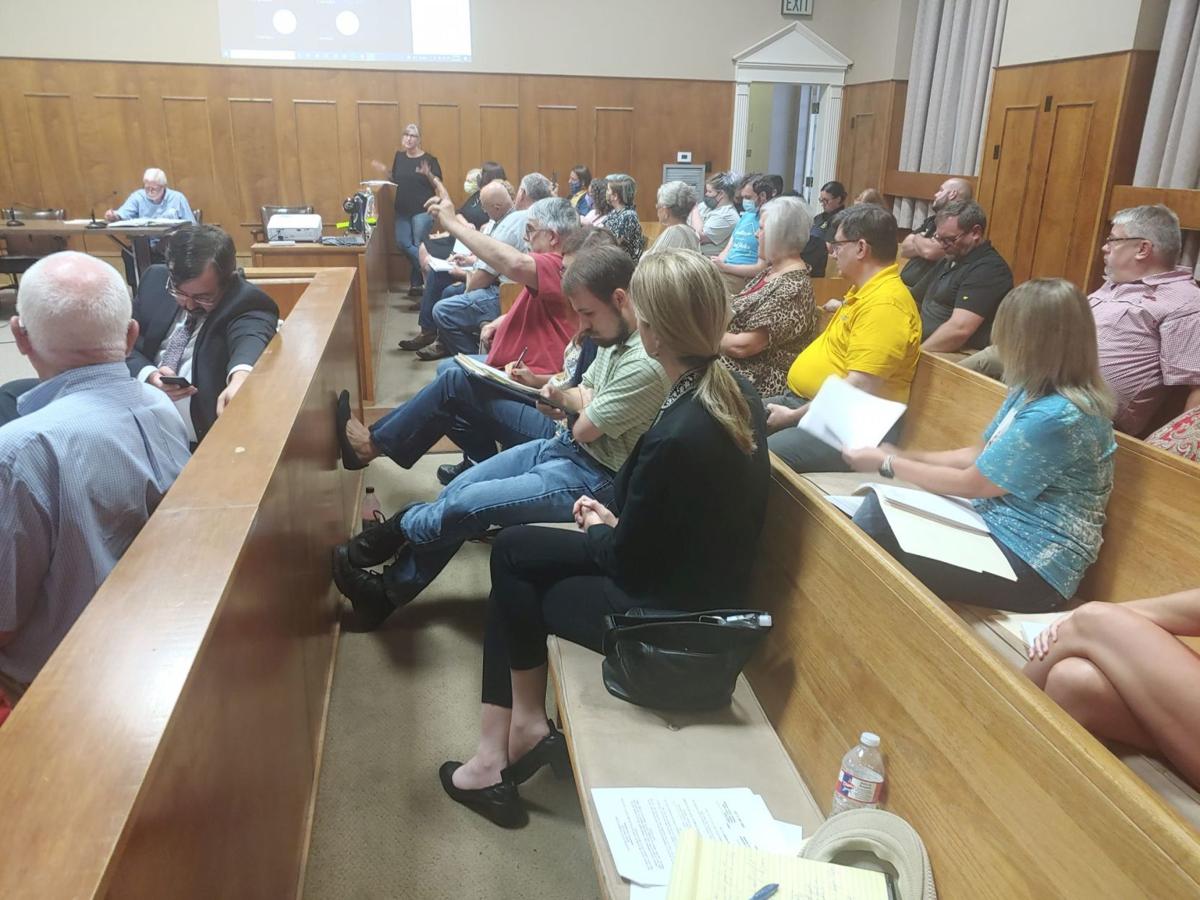 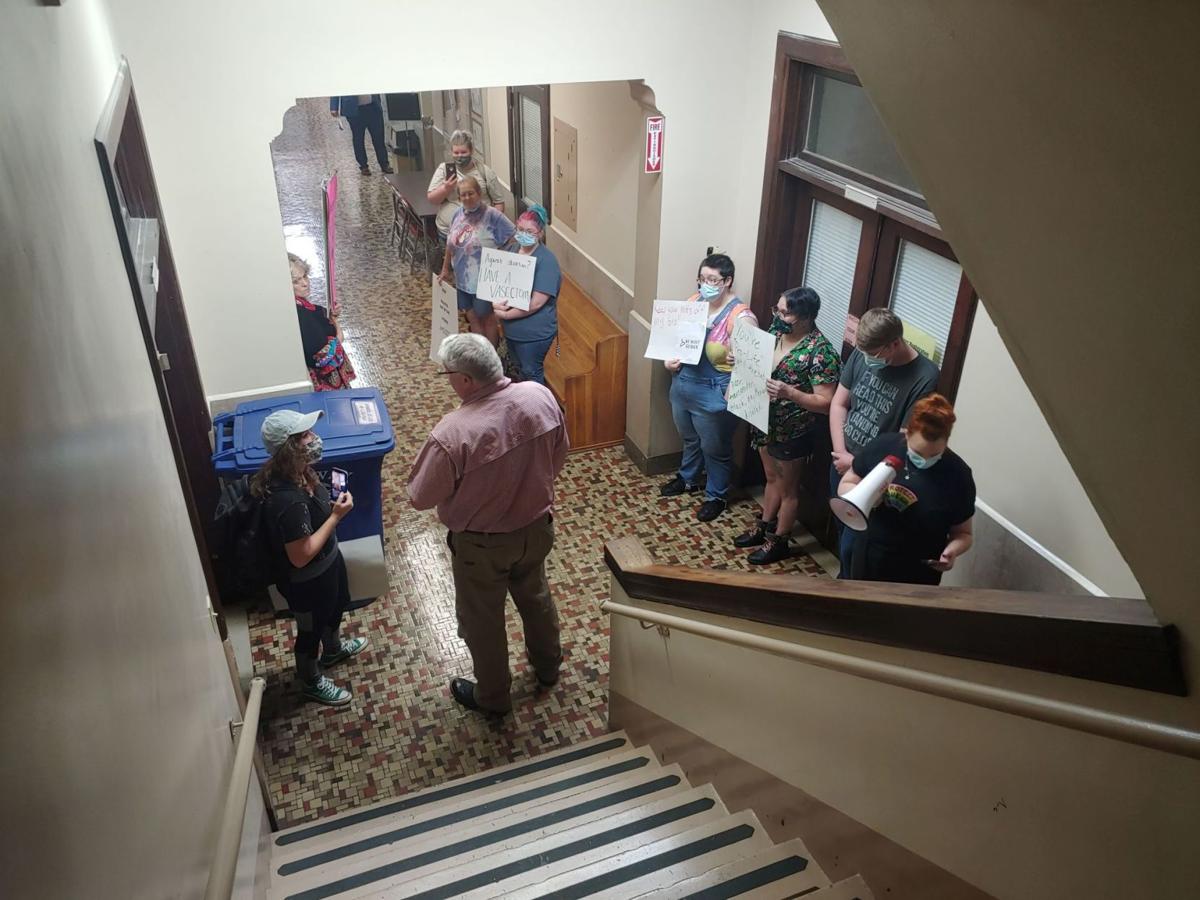 Protesters in the courthouse lower hallway after the Courts & Public Safety Committee approved the Pro-Life County resolution to move to the Quorum Court for vote. 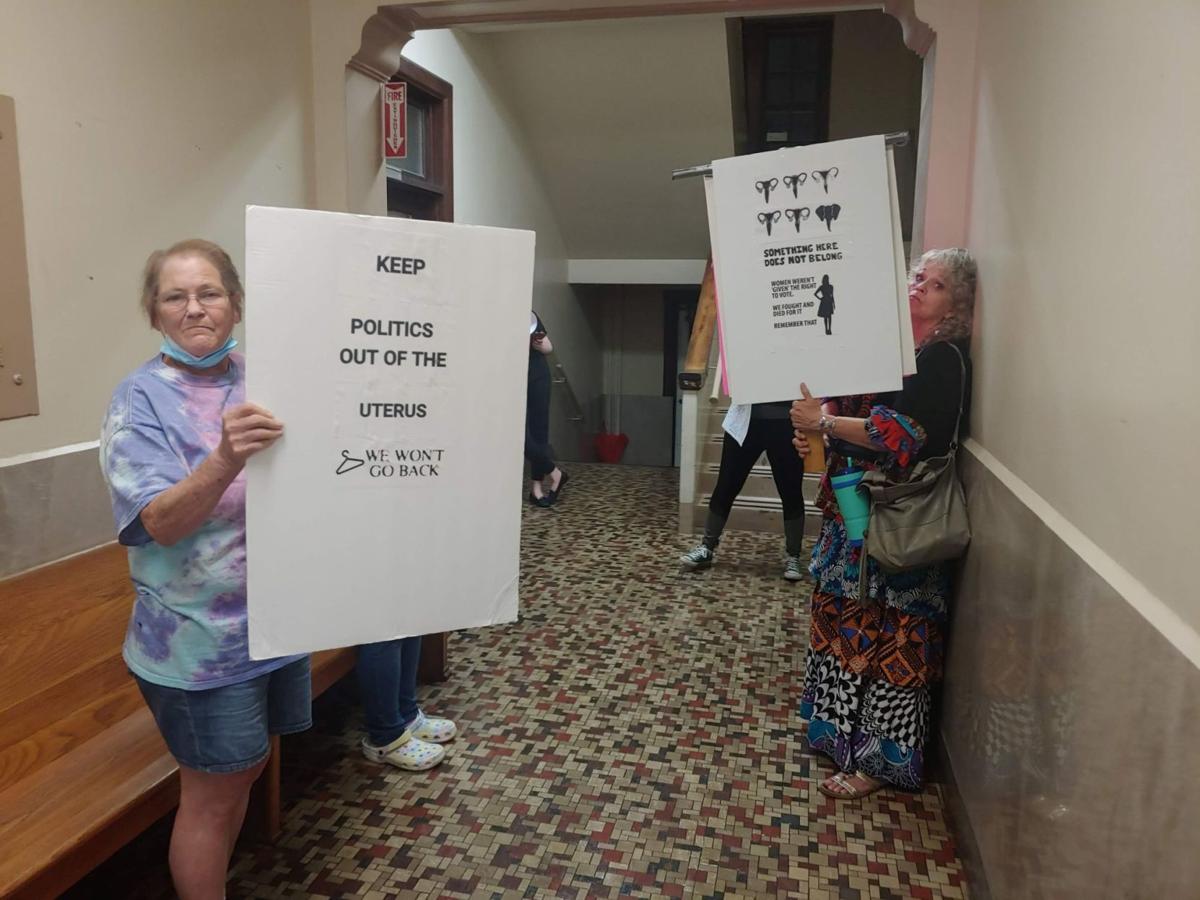 Protesters in the courthouse lower hallway after the Courts & Public Safety Committee approved the Pro-Life County resolution to move to the Quorum Court for vote. The protest later moved to outside the building.

Protesters in the courthouse lower hallway after the Courts & Public Safety Committee approved the Pro-Life County resolution to move to the Quorum Court for vote.

Protesters in the courthouse lower hallway after the Courts & Public Safety Committee approved the Pro-Life County resolution to move to the Quorum Court for vote. The protest later moved to outside the building.

Faulkner County Quorum Court held its committee meetings Tuesday night. Protests followed a vote to move a resolution declaring Faulkner County a “Pro-Life County,” expected to be voted upon at the next Quorum Court meeting. Justices also reviewed pay raise requests which had dated back to May, the majority of which were tabled.

The four committees, Budget & Finance, Courts and Public Safety, Personnel and Infrastructure & Roads also reviewed more routine legislation, including funding requests. One extended presentation for a funding request was made on behalf of the Faulkner County Sheriff’s Department Reserve Unit.

An ordinance for a Parental Leave policy, was, again, reviewed.

The Pro-Life county proposed resolution was presented by Justice Kris Kendrick to the Courts and Public Safety Committee, which is chaired by Justice Randy Higgins.

Higgins opened the floor to public comments shortly after the resolution was introduced, a group of about 25 being in the gallery specifically regarding this ordinance.

Treci Buchanan, from the community, led the public comments asking why this legislation was needed, in light of more pressing issues, such as poverty and homelessness having a more pressing impact on the health and welfare of the county.

Kendrick replied that the resolution, one of several having been either passed or under consideration by quorum courts in the state, would empower the county to promote the pro-life cause by such things as signs on the highway and other forms of advertising. He added that the resolution is in keeping with Arkansas Constitution Amendment 68, which states its intent is “... to protect the life of every unborn child from conception until birth,” which is carried forward in the proposed resolution.

Several spoke in support of the resolution, including Justice John Allison III and Faulkner County Circuit Clerk Crystal Taylor, the latter saying the county should “follow the state lead” in passing the proposed resolution.

The resolution was approved by the committee for review by the full quorum court at its next meeting.

Shortly after the approval most of the gallery left the room. A short while later noise was heard as a handful of protesters, one with a portable megaphone, formed on the first floor of the courthouse. Later what was presumably the same group was heard outside the courthouse. They did not disrupt committee process.

A series of pay raise requests were presented to the Personnel Committee, chaired by Justice Tyler Pearson.

The requests had gone through a process prior to Tuesday night review. Initially the pay raises were presented as one request across all departments in May. Following this the committee tabled the requests, at the time questioning the methodology used to justify the raises, including how compensation survey for other counties were made, as well as concern that all departments were in one piece of legislation instead of separate legislation for each department.

Following this, at its August meeting, the court passed two ordinances, one requiring that pay raise requests have a formal methodology in how other county pay scales are used and presented to the court, and a second that pay raise requests be made by department. Counties used for comparison must be Class 6 counties, 70,000 to 199,000 population, was part of the passed legislation.

Presentations began with Faulkner County Sheriff Fiscal Officer Angie Wooley presenting requested pay raises for county dispatchers. Her presentation included supporting data reflecting pay in other Class 6 counties for equal positions. The request was approved for move to the Budget and Finance Committee for review, which would then, if approved, move it to the full court for a vote.

Justices, including committee member and chair of Budget & Finance committee Justice Pickett, complimented Wooley on the supporting data she included with the request, reflecting the court’s recently-passed ordinance requirements.

Raise request presented by other department heads did not go as well. A pay raise ordinance by Faulkner County Collector Sherry Koonce was tabled after, having made her presentation, she returned to her seat in the gallery. Pickett proposed that the request ordinance not move forward because its supporting data “does not satisfy” the recently passed court legislation.

Koonce was obviously mystified by this, heard to ask “Why?” aloud, but was not acknowledged by the committee, her presentation having been completed. (Committee chair Pearson, attending remotely via Zoom, may not have heard or been aware of Koonce’s question.)

The same tabling due to “data not supporting” took place to presentations by the Assessor’s office, County Clerk’s office, and the Treasurer’s office.

The only exception was the passage of the request by Circuit Clerk Crystal Taylor, who began her presentation by pointing out flaws in the Class 6 county methodology, due to the wide population gap of counties in that ranking and large number of counties in that class. That proposed ordinance was in the process of being voted to move to Budget & Finance when Pickett attempted to table it on “data” grounds.

Committee member Justice Kendrick said the reason the supporting data was emailed to committee members prior to the meeting was to avoid problems such as what were taking place. Kendrick had sponsored the ordinance which put the data requirement in place.

Pickett announced to the group that the problem with the data requirement is the different “tax rate and tax base” among Class 6 counties.

Commander Monty Harper and Deputy Brian Tyner presented to the Courts & Public Safety Committee a request for allocation of a portion of American Rescue Plan Relief Fund money be allocated to their department.

The request was specifically for an upgrade to the radio system, and new body armor, for the currently 21-member force.

Committee chair Higgins said he thought the radios would be relatively straight-forward enough via the Rescue Plan terms, but the body armor might be “more difficult.” He indicated he would work with county attorney Phil Murphy in getting legislation drawn up to support the request.

Several justices spoke in favor of the organization.

The Personnel Committee, again, reviewed the proposed maternity leave policy for county employees. This same ordinance, having been through multiple changes, was removed from consideration from last month’s Quorum Court after concerns about procedure in how it was brought to the court for vote.

Committee chair Tyler Pearson, also the proposed ordinance’s sponsor, apologized to the committee for any confusion in procedure.

Committee member Kendrick pointed out that employees already receive up to 240 hours of vacation, 480 hours of sick leave, and leave under the Family Medical Leave Act and catastrophic leave via a county program. The proposed policy would add up to two weeks additional leave, he said.

The proposed ordinance was passed and will move to the full quorum court for vote.