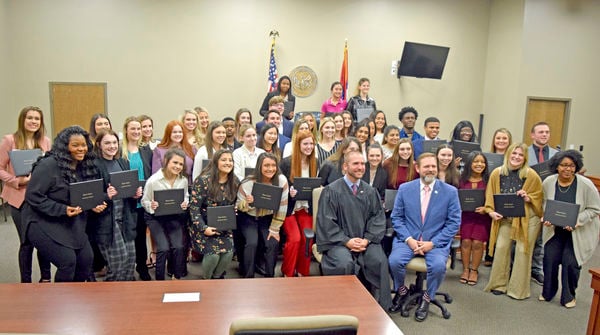 High school seniors from across the 20th Judicial District took an oath Monday night to serve their peers as the 2020 Teen Court class. 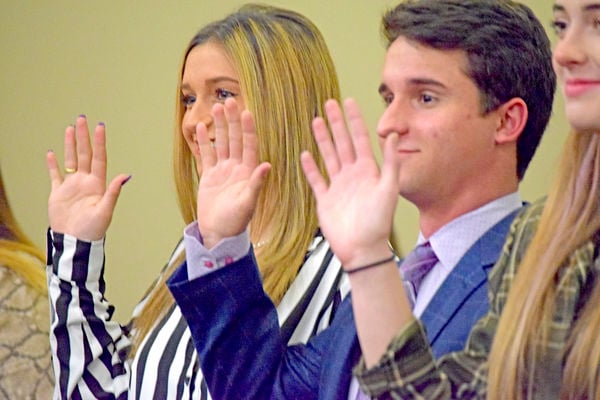 Greenbrier seniors Morgan and John Trent are among the 40 students accepted into the 2020. 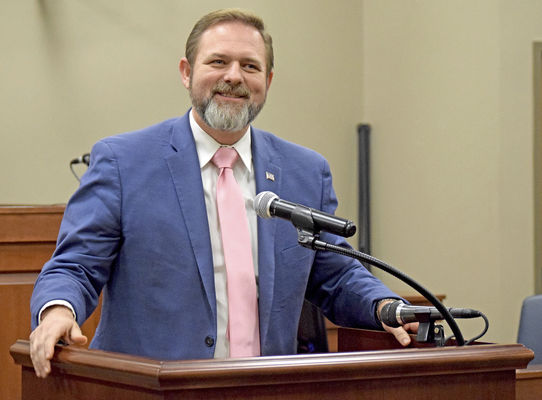 U.S. Attorney Cody Hiland encouraged the room of high school seniors to serve their community well when participating in the Teen Court program. 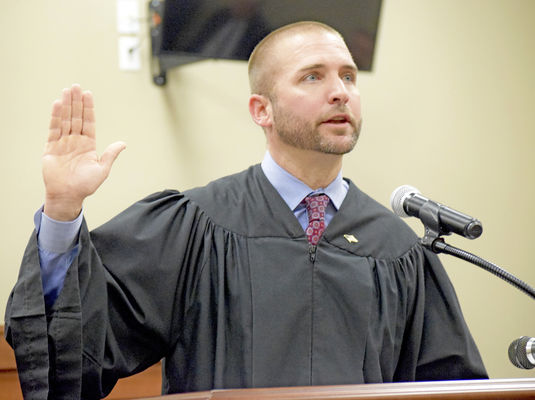 High school seniors from across the 20th Judicial District took an oath Monday night to serve their peers as the 2020 Teen Court class.

Greenbrier seniors Morgan and John Trent are among the 40 students accepted into the 2020.

U.S. Attorney Cody Hiland encouraged the room of high school seniors to serve their community well when participating in the Teen Court program.

Having the opportunity to serve in the Teen Court program goes beyond other after school programs and acts as a true means for Faulkner and Van Buren county seniors to serve the community, U.S. Attorney Cody Hiland said.

The program is an avenue for area seniors to serve their community and better themselves as they learn firsthand how the court system works and make a lasting impact on other teens’ lives, he said. Prosecutors must take a stand when others continually break the law and hurt other people. As offenders reach their early 20s, “it’s very difficult to turn things around.”

Juvenile court reform movements are imperative to bettering the lives of Arkansas youth because juvenile court staff work toward rehabilitation, Hiland said, adding that Teen Court has an important role in this movement.

“You all have the opportunity to participate in Teen Court and to sit and be part of the process, part of the diversionary process,” he said. “You will see very real people. Very real teenagers come in here with very real problems, and you have an opportunity to make a difference. It’s a matter of trust.”

Teen Court proceedings consist of trained teens acting as prosecuting attorney, defense attorney, bailiff, clerk and jury and are presided by Judge Braswell. The teens will hear actual cases of juveniles charged with violating state laws. The 2020 Teen Court program is the fifth class since the program was reinstated.

Faulkner County was one of three pilot courts to try out the risk assessment program. Since putting use to the juvenile justice reform project, Faulkner County officials (and courthouses across the state with the passage of Act 152) have given structured assessment of violence risk in youth (SAVRY) questionnaires to all court-involved youth. The questionnaire helps juvenile court staff determine if a juvenile offender is at a low, moderate or high risk of re-offending and also helps officials gather information about the individual to learn what programs and services would best help them or if their case should be diverted to another entity, such as Teen Court.

This movement was not well received in its early stages.

“We were a little bit mocked … as we started developing this tool and started using it in our jurisdiction,” Braswell told a courtroom full of high school seniors and their families as he spoke of the history of juvenile justice reform in Faulkner County. “It was told to me that I could not expect parents or families to come into court and be honest about some of the worst things that have gone on in their families.”

When asked what percentage he hoped would be truthful, Braswell admitted he aimed to reach at least 10 percent.

In a district with children who are reportedly beaten by their biological parents during visitation hours or others who are left with a violent parent in hopes the other parent will return to rescue them, Braswell said he was willing to fight for juvenile rehabilitation.

“If these are the 10 percent we’re fighting for, it’s worth the fight,” he said.

Since implementing the risk assessment program and implementing services and diversions such as Teen Court, Faulkner County has seen a drastic decrease in detention rates.

“We saw a 78 percent reduction from 2015 to 2019 in the number of kids who have gone in and out of our local detention center,” Braswell said.

In 2015, 495 juveniles were placed behind bars in the Faulkner County Juvenile Detention Center.

Officials reported having 212 juvenile detainees in 2018.

And, in 2019, Faulkner County had 102 juvenile detainees housed in the FCJDC throughout the year.

Greenbrier senior John Reagan Hiland said he was excited to follow in his family’s footsteps as a 2020 Teen Court participant.

His older sisters, Claire and Caitlyn Hiland, also participated in the program during their senior years. U.S. Attorney Cody Hiland is their father.

After hearing about the program through his siblings, John Reagan said he looks forward to creating his own experiences in the program. Having a passion for leadership, the high school senior said he’s “really excited to impact someone’s life and help out the community in a much deeper way, a more one-on-one way.”

The 2020 Teen Court also has its first set of twins participating since the program’s reinstatement.

Greenbrier seniors Morgan and John Trent said they hope to make the most of the opportunity they’ve been given to serve in Teen Court.

Because the siblings were both accepted into the program, John said he believes the two will be able to use their separate perspectives to better serve their peers.

Judge Braswell left Monday’s attendees with an encouraging testimonial of a previous Teen Court participant toward the end of the swearing-in ceremony.

The juvenile judge acknowledged a participant who had been in and out of the court system but because she had shown significant improvement, was allowed to serve in Teen Court.

“According to everyone else, she didn’t belong in a Teen Court program, sitting shoulder to shoulder with, as Mr. Hiland said, the ‘cream of the crop.’ But, she had been doing really well,” Braswell said. “We terminated her probation case early, we allowed her to come in and go through the training and she wanted to serve and give back. She sat on the front row every time.”

This particular teenage girl gained courage and the ability to better her community and her own personal life through participating in the program, the circuit judge said.

“That young girl that ‘didn’t have any business being in Teen Court and didn’t fit in Teen Court’ became the first person in her entire family to go to college and made the Dean’s List her first year of school.”

Hiland encouraged the 2020 Teen Court class to take advantage of the opportunity to serve others and to make the most of the program in the coming months.