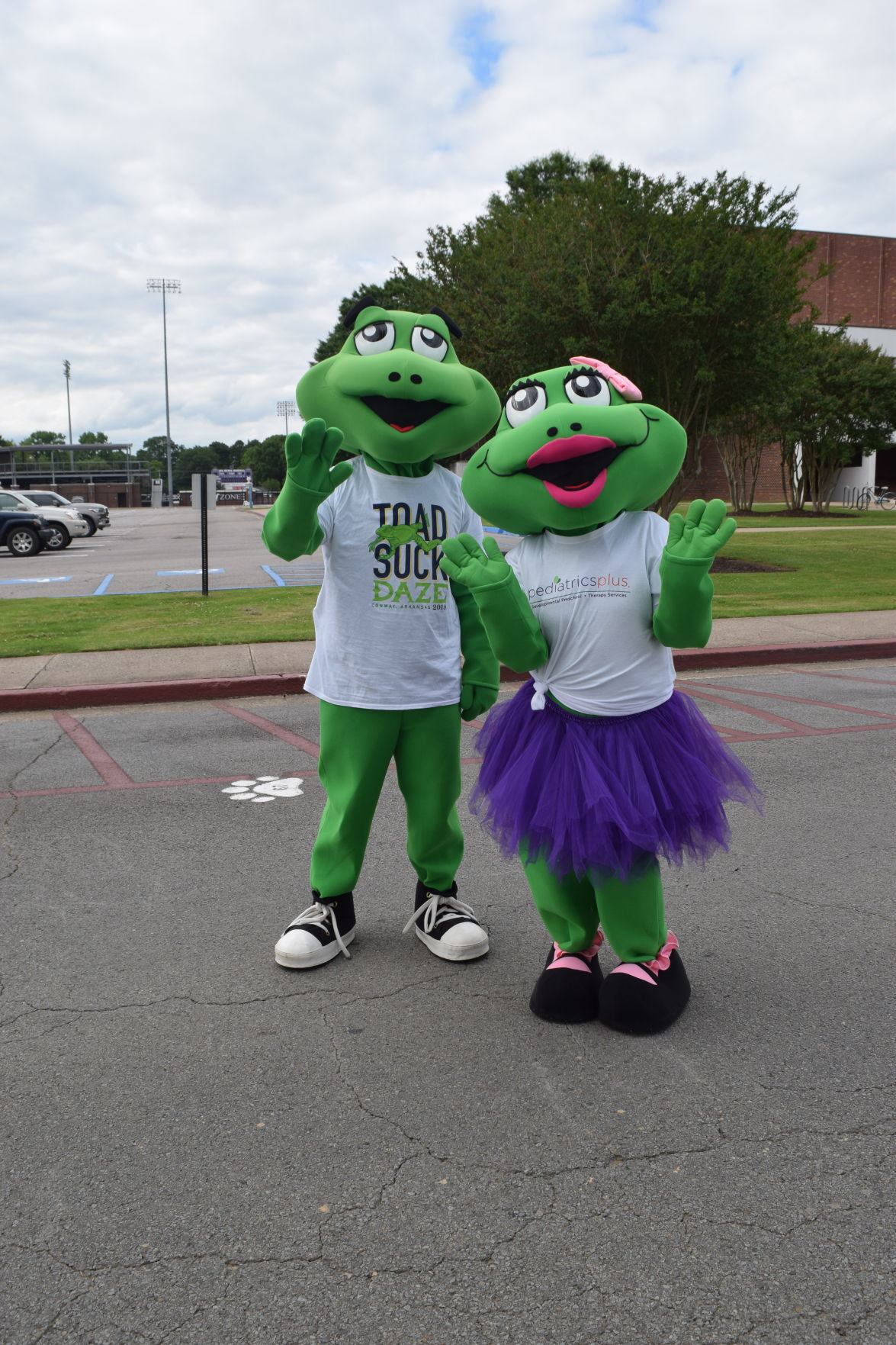 Croaker and Dazey greeted everyone who attended Wednesday’s event. 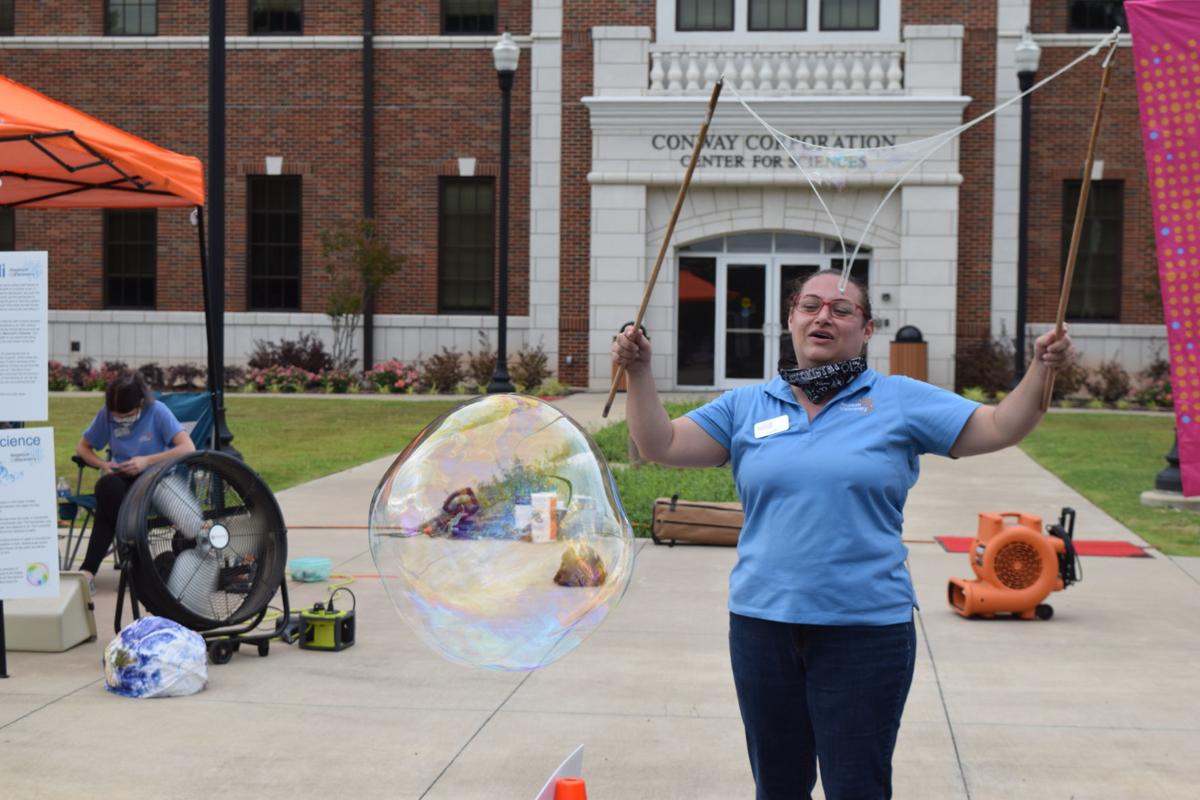 Museum of Discovery staff perform a large bubble demonstration midway through the exhibit. 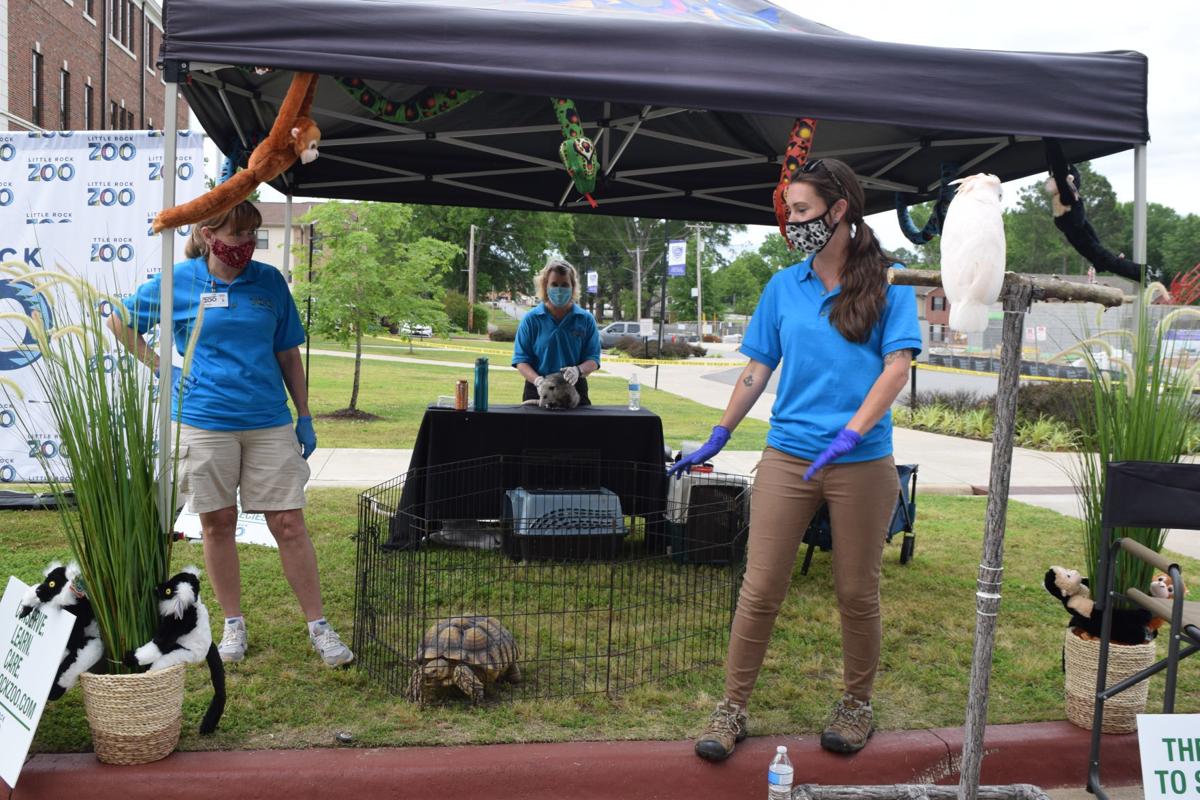 Little Rock Zoo staff ended the drive-thru experience by showing off an opossum, penguins and other animals.

Croaker and Dazey greeted everyone who attended Wednesday’s event.

Museum of Discovery staff perform a large bubble demonstration midway through the exhibit.

Little Rock Zoo staff ended the drive-thru experience by showing off an opossum, penguins and other animals.

Croaker and Dazey, the Toad Suck Daze mascots, were onsite and waving families along the event’s path as they made their way toward the main attraction.

The drive-thru event began at 2 p.m. and was stationed along Bruce Street on the University of Central Arkansas campus. Though organizers initially planned to keep the lines open until 6 p.m., they were forced to close off the entrance at shortly before 5 p.m.

“We thank everyone for coming to the Toad Suck Daze Nature and Science Show. Due to the overwhelming response, no more vehicles will be allowed in,” organizer’s posted on the event’s Facebook page at 4:40 p.m. Wednesday.

The Arkansas Game and Fish Commission kept its aquarium stationed along Bruce Street after the event ended to allow those who could not participate in the drive-thru event to see it.

The hundreds of residents who waited through the line that zigzagged through the UCA campus parking lots were able to see AGFC exhibits featuring Arkansas fish, reptiles, amphibians and birds.

Greenbrier resident Steve Wilson and his wife brought two of their grandchildren to the event. Though they waited in line for an hour and a half, Wilson said it was a great event.

While the drive-thru exhibit experience itself lasted about 11 minutes, Wilson said it was worth the wait for his grandchildren.

"Ty and Tess [McNew] enjoyed all the animals on display — especially the bullfrog, alligator, the soft shell turtle and the penguin," he said. "I was impressed with the way the exhibitors interacted with the kids. Of course for me, it was good to see that Arkansas State Parks were represented."

The retired state park superintendent said he and his wife enjoyed spending time with their grandchildren as they waited.

"In the drive-thru leading up to the exhibits the kids didn't get bored or restless," he said. "We let them out of their seats and they enjoyed watching other people. Even though the lead time was long, it was well worth the wait to get to the exhibits."

During the event, Museum of Discovery staff performed various science-related demonstrations including a large bubble station.

“Yesterday was a big success,” he told the Log Cabin Democrat on Thursday. “The Arkansas Game and Fish Commission estimates we had between 2,500 and 3,000 come through the exhibit.”

The AGFC worked to bring in “the most well-known and trusted brands in science and nature education,” Gates said.

Organizers did not expect such a massive turnout on Wednesday.

“It was a great example of how the Toad Suck Daze festival still can deliver to families [entertainment] that’s high quality and free,” he said. “I hate that we weren’t able to get every car that showed up through the exhibit. We were a little surprised by our Wednesday turnout.”

The event was made possible through sponsorships with Caldwell Toyota, Conway Corporation and Heart of Arkansas. First Arkansas Bank and Trust is presenting all Toad Suck-related events.

“UCA was the perfect hose,” Gates added. “Hopefully that will be the first of many educational experiences those kids have on UCA’s campus.”