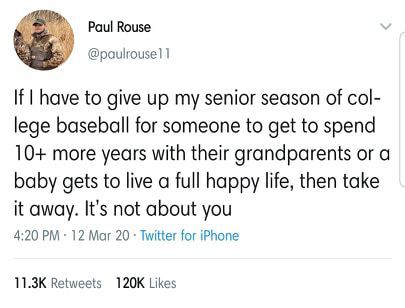 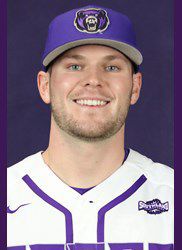 After the University of Central Arkansas baseball team learned the NCAA had canceled all spring sports for the remainder of the 2020 season, a senior from Bentonville left his teammates with an inspiring message.

The team was headed to a weekend series in Thibodaux, La., when the news broke that the season was called off.

“We were three hours down the road and had to come back,” senior Paul Rouse told the Log Cabin Democrat. “I was sitting in a group of six or seven seniors, and naturally, we were upset.”

The news meant the cluster of senior baseball players would not be able to finish out their final season of college ball.

As the team disembarked from the bus, Rouse said aloud what he later wrote in a Tweet to remind his teammates that the COVID-19 outbreak was a bigger issue than them missing out on their final season.

The Tweet that immediately went viral reads: “If I have to give up my senior season of college baseball for someone to get to spend 10+ more years with their grandparents or a baby gets to live a full happy life, then take it away. It’s not about you.”

The UCA senior said he genuinely felt others needed to hear this message.

When he was younger, Rouse would spend several weeks each summer with his maternal grandfather.

“I haven’t seen him in a while because of baseball,” the UCA senior said. “He lives in Colorado. I would spend time over the summer break and go fishing with him. We stayed at his cabin.”

Rouse is majoring in biology and plans to apply for a job in orthopedics and also apply for medical school upon graduating from UCA.

While he never expected the post to go viral, Rouse said he hopes those who read it understand the message.

“Yea, we’re hurting, but other things matter more. Baseball is a game and it could mean someone else’s life,” he said.

NCAA officials have since announced the organizations would extend eligibility requirements next year to those affected by spring sports cancellations. Details surrounding this extension are not set in stone.

“Council leadership also agreed that eligibility relief is appropriate for all Division I student-athletes who participated in spring sports,” the NCAA’s Division I coordination committee said in a statement Wednesday. “Details of eligibility relief will be finalized later with input from the Division I membership. Additional issues with NCAA rules must be addressed, and appropriate governance bodies will work through those with members in the coming days and weeks.”

Steve East, the university’s sports information director, said he was glad to NCAA “did the right thing” by extending eligibility requirements to those affected by cancellations made amid the novel coronavirus outbreak.

Several UCA student athletes have gathered in small groups to play baseball and participate in other activities after officials announced they could no longer practice as a team.

“Many of them don’t know what to do with all this extra time,” East said.

Though the opportunity to participate in the 2021 spring season is on the table, the sports information director said a number of students will be unable to take advantage of the extension.

“Some already have jobs lined up,” he said, adding that he hopes to see as many that can participate come back next season.

East said he was not surprised to see Rouse share an encouraging message to others to share a positive outlook during the pandemic.

“He’s a very nice young man … a team player,” East told the Log Cabin. “He’s all about everyone else.”