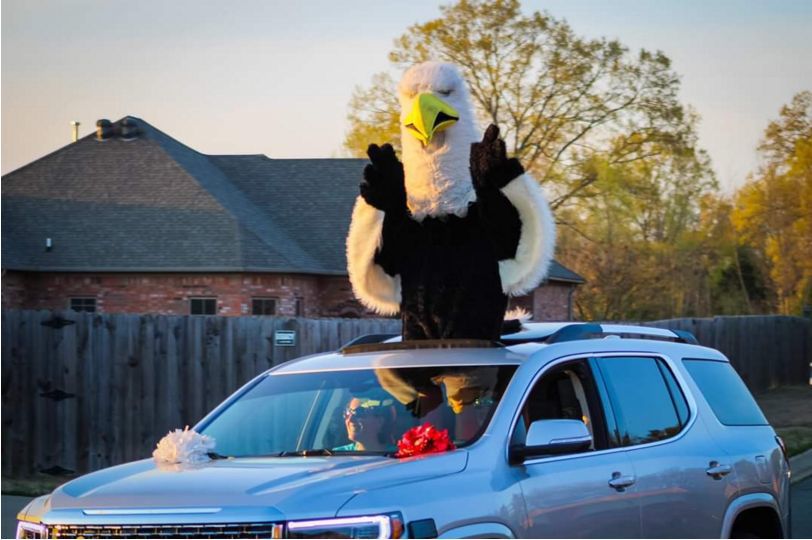 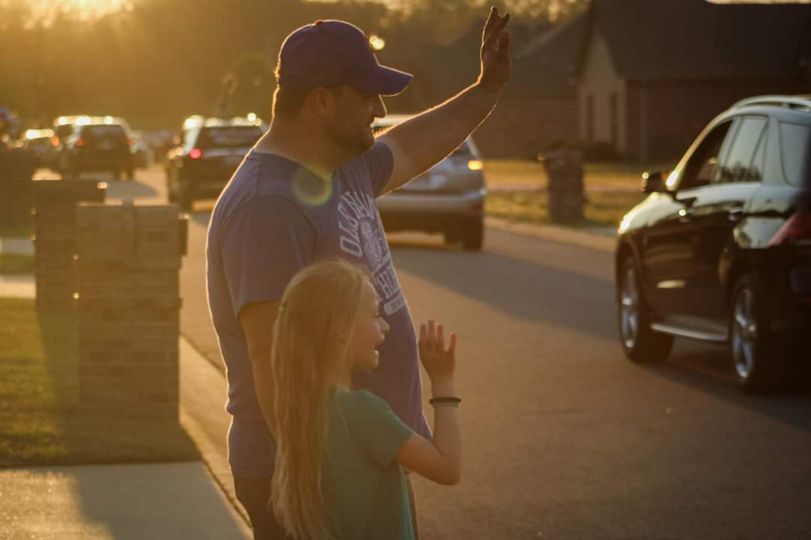 Students and their parents waved at and cheered on the district’s administrators and teachers during the event. 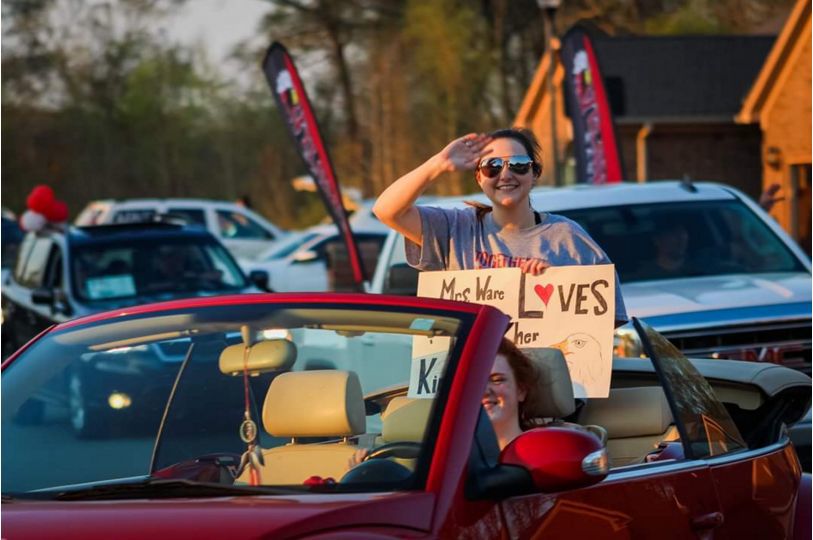 The event allowed administrators, educators and their family members to remind students that the district and their teachers miss them. 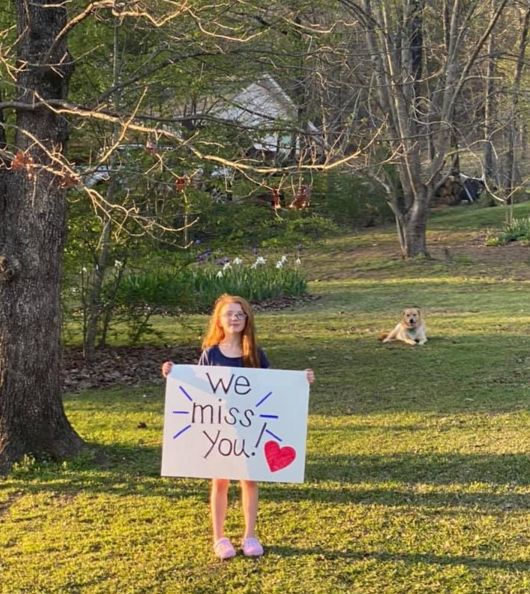 Students held up signs with messages to their teachers. One young girl held up a sign stating: “We miss you!” 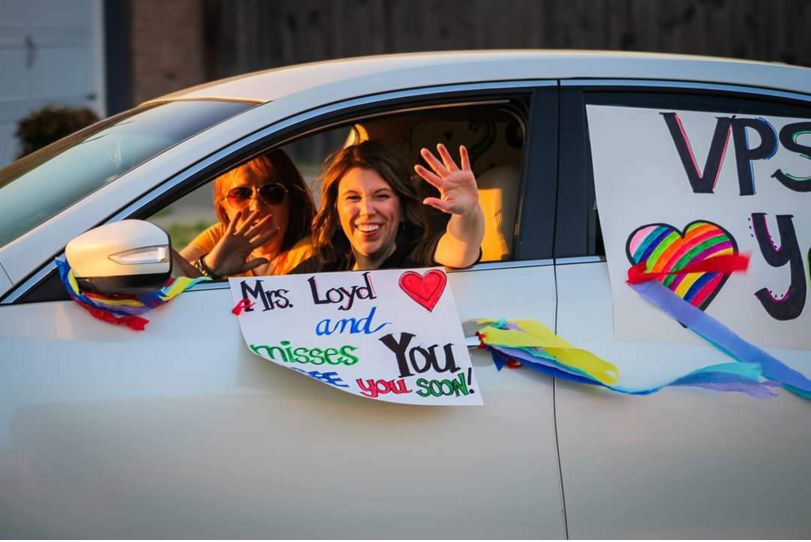 Students and their parents waved at and cheered on the district’s administrators and teachers during the event.

The event allowed administrators, educators and their family members to remind students that the district and their teachers miss them.

Students held up signs with messages to their teachers. One young girl held up a sign stating: “We miss you!”

Vilonia Public Schools administrators and educators have missed their students so much so that they organized a parade that lasted four hours and ran 94 vehicles strong.

The parade began at 4 p.m. at the high school and ended around 8 p.m. in the Black Oak Ranch Estates subdivision.

Ronnie Simmons, the principal at Vilonia High School, said he was inspired by the number of district educators along with their family members (totaling 154) who participated in Thursday’s parade.

“All along the way through this COVID-19 pandemic, I have reminded myself and others to take some time to be still and soak in what’s happening around us. Regardless of your take on how bad things are right now in our world, you have to agree that we are living in a historical moment in time,” he said. “Through this pandemic, I’ve seen anxiety in many, panic in others, and fear of the unknown in most everyone. However, I’ve also seen so many positive things emerging through this and it takes me back to days in the aftermath of the tornadoes that hit our area. There’s so much kindness and goodness in the people of Vilonia!”

Erin Rappold, a VHS EAST facilitator, said she and others coordinated this city-wide event to remind students and their families that the school district cares about its students and to bring them encouragement while the district remains closed.

Gov. Asa Hutchinson previously ordered public schools across the state to shutdown and remain closed until April 17 amidst the COVID-19 outbreak.

Organizing a “teacher parade” as other schools across the county have done was one way the district could reach out to its students in a positive way during this pandemic, Rappold said.

“It was about giving comfort to our community that has already been through enough to least a lifetime,” she told the Log Cabin Democrat. “We did it for the kids. But in reality, we all needed the [morale] boost – the students, community, parents, faculty and all staff. Everyone left with a strong feeling of unity for our school district and community. We are Vilonia Strong.”

Students in the district appreciated the educators’ efforts.

“As a Vilonia student, this was exactly what our town needed,” senior Madison McHolan wrote in a social media post following the event. “Our family enjoyed it so much and we truly appreciate the teachers taking time out of their spring break. I know other people enjoyed and appreciated it as well.”

The high school senior said it was clear organizers spent many hours preparing for the parade.

Simmons and his wife, Kim Cason Simmons, also participated in the teacher parade. Cason Simmons is a science teacher at Vilonia Middle School.

Seeing all 94 vehicles lined up and ready to take on the city streets was “a sight to behold” on it’s own, Simmons said. However, as the group made its way through various neighborhoods, the high school principal said the students and their families continued making the groups efforts worth while.

“I joked with Kim Cason Simmons and said that even if there were no students or parents along the way, this would be a great thing for our school employees to come together like this. But we soon discovered that there was no shortage of community support all along the way as we traveled through so many of our neighborhood subdivisions,” Simmons wrote in a social media post Friday morning as he reflected back on the event.

The district’s youngest students proudly held up signs with messages to their instructors, and high school students also waved to their school officials.

“Their little faces lit up when they saw their rockstar teachers drive by and wave at them,” Simmons said of the primary and elementary students’ reactions.

Parents jokingly held up signs asking the teachers to take back their children.

Though other schools in Faulkner County and across the state have hosted teacher parades following COVID-19 mandated shutdowns, Simmons said he believes Vilonia has put on the best show yet.

“My wife and I returned home after that marathon parade and rejoiced about the good that was done with that simple parade,” he said. “I have seen posts from others about similar parades in other towns, but I have not seen anything posted that reveals the good that is done by reaching out to the community like we did [Thursday].

Harold McCain, one of the district’s agriculture instructors, made sure two horses followed behind the 94-vehicle parade because “it’s not a parade unless it ends with horses.”