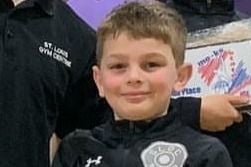 Robby Taylor was killed from an apparent dog attack near his home Thursday in Mount Vernon.

A Vilonia man is behind bars without bond after his dogs reportedly killed a 9-year-old boy in Mt. Vernon on Thursday.

The Faulkner County Sheriff’s Office announced in a news release Friday afternoon that Wyatt is also expected to be charged with “multiple county ordinances including: nuisance animals and hazardous animals running at large, liability of animals that attack a human being and keeping of a dangerous dog.”

A close family friend has since set up a GoFundMe account for Robby Taylor, the boy who was killed by two dogs Thursday morning.

The boy’s mother called 911 at 9:15 a.m. Thursday after he went missing when he went to check the mail.

The boy’s mother also alerted police that she saw “several dogs running from a field near her home,” authorities said.

Sheriff’s deputies found the child dead from an apparent dog attack near the family’s home.

With help from the Conway Animal Shelter, the dogs were removed from a residence on Chambers Lane and “will be quarantined for investigative purposes,” authorities said.

While authorities have not released further details on what happened or what types of dogs attacked the young boy, a close family friend said the boy was attacked by two pit bulls.

“Robby was walking to the mailbox at his home in Mount Vernon and was attacked by [two] loose pit bulls that ended up taking his life,” she said. “His family will forever be at a loss and changed from this horrible tragedy.”

The family friend said she created the fundraiser to support the Taylor family.

“Please help them with what you can and [know] your support matters to them,” Homme said. “The [two] other children will need help through this as well. Your thoughts and prayers are much needed in this time of need.”

In the US a pit bull kills a person an average of once every 11 days. They are weapons that can pull their own trigger.

I agree ! There should be a leash law out in the county as well! I’ve called myself about a certain pit bull in our area and now I hate to know a child had to lose their life over this matter. They are viscous animals! It’s in their instinct and blood no matter how they are raised! They shouldn’t be allowed in any state or county or city at all!!!! They should require and enforce these dog laws way before anything like this happens!!!!