Skip to main content
You have permission to edit this article.
Edit
HOME
Van Buren E-Edition
Obituaries
Share This
1 of 2 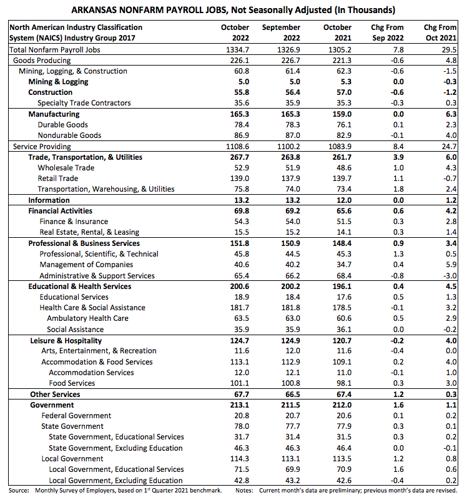 Labor force data, produced by the U.S. Department of Labor, Bureau of Labor Statistics and released today by the Arkansas Division of Workforce Services, show Arkansas’ seasonally adjusted unemployment rate rose one-tenth of a percentage point, from 3.5 percent in September to 3.6 percent in October. Arkansas’ civilian labor force declined by 489, a result of 1,589 fewer employed and 1,100 more unemployed Arkansans. The United States’ jobless rate increased two-tenths of a percentage point between September and October, rising from 3.5 percent to 3.7 percent.

BLS Programs Manager Susan Price said: “The number of employed Arkansans declined for the third month in a row, as the unemployment rate grew to 3.6 percent in October. While employment has decreased since July, there are still 17,802 more employed Arkansans compared to October 2021.”

Jobs in government increased by 1,600. Most of the gains were in local government-educational services (+1,600), as public schools across the State continue to hire. Jobs in other services rose by 1,200. This industry sector includes activities such as automotive repair, drycleaning services, and civic and social organizations.

Compared to October 2021, Arkansas’ nonfarm payroll jobs are up 29,500. Nine major industry sectors reported growth, with five sectors adding 4,000 or more jobs each. The largest gain was in manufacturing, up 6,300 jobs. Most of the hiring was in nondurable goods manufacturing (+4,000). Jobs in trade, transportation, and utilities rose by 6,000. Expansions in wholesale trade (+4,300) and transportation-warehousing-utilities (+2,400) more than offset losses in retail trade (-700). Educational and health services added 4,500 jobs. Most of the gains were in health care and social assistance (+3,200). Jobs in leisure and hospitality increased by 4,000, with most of the hiring in food services (+3,000). There were also notable expansions in professional and business services (+3,400), information (+1,200), and government (+1,100).

Jobs in construction are down by 1,200 over the year.