You have permission to edit this article.
Edit
HOME
Van Buren E-Edition
Share This
1 of 7 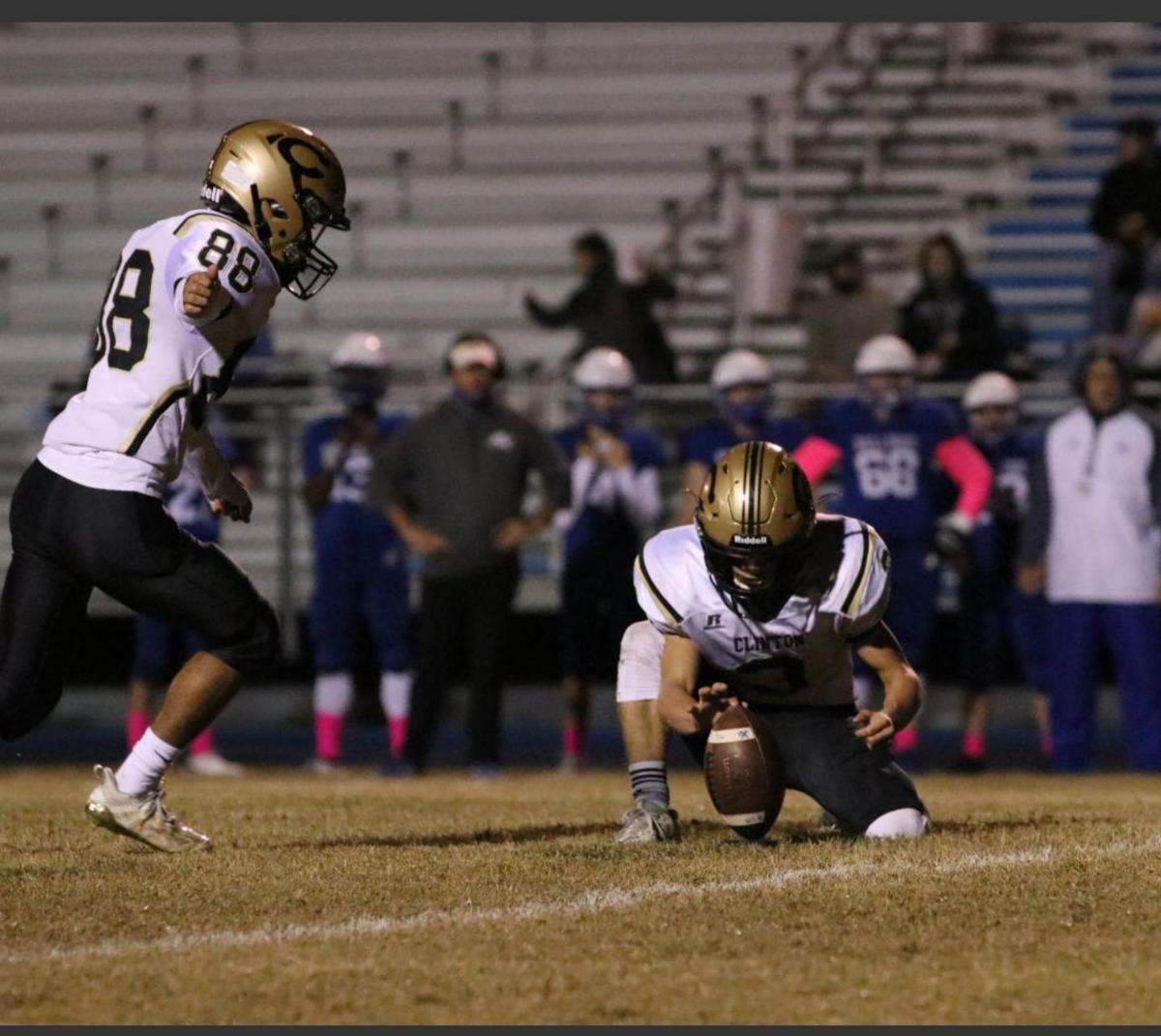 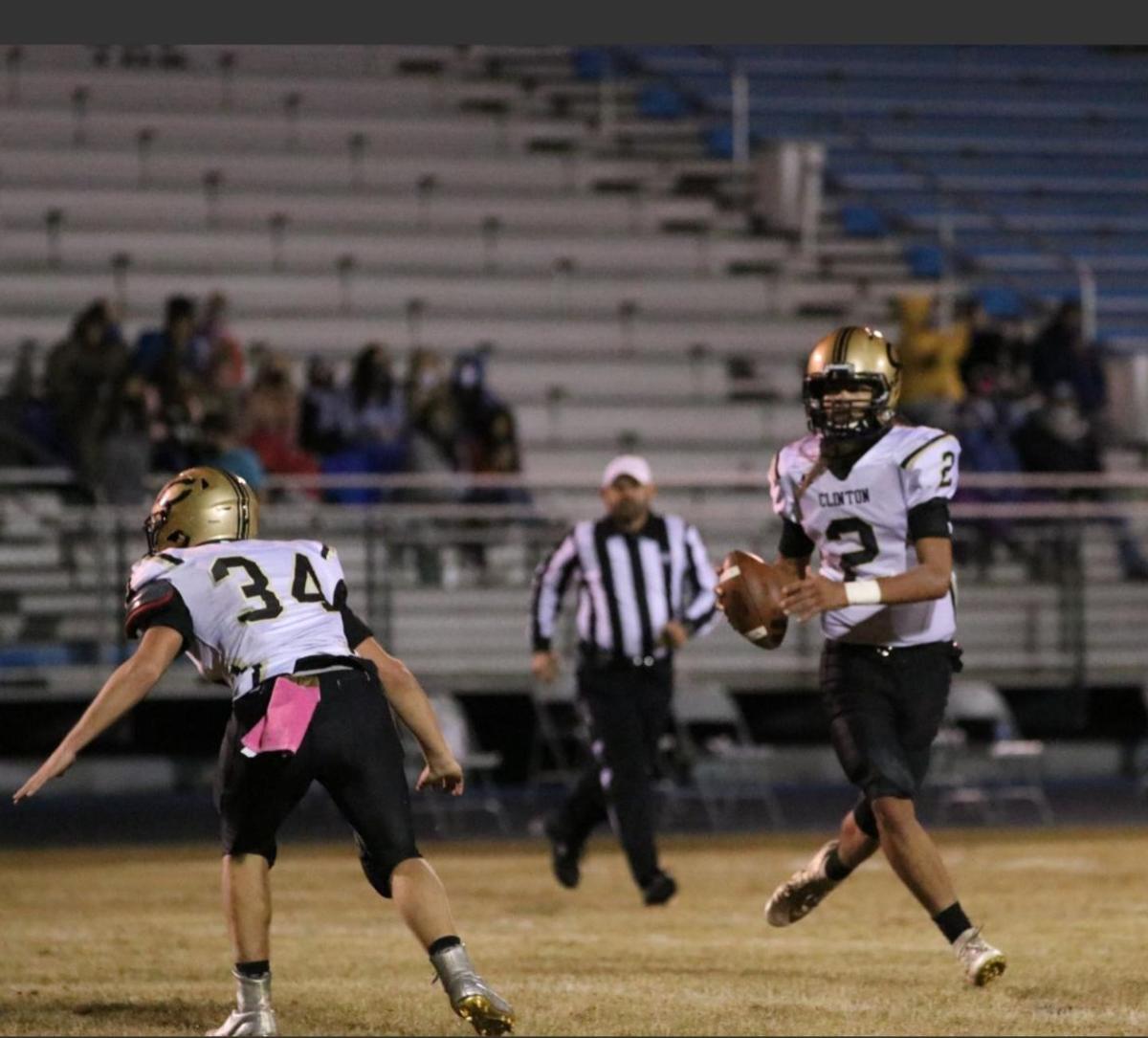 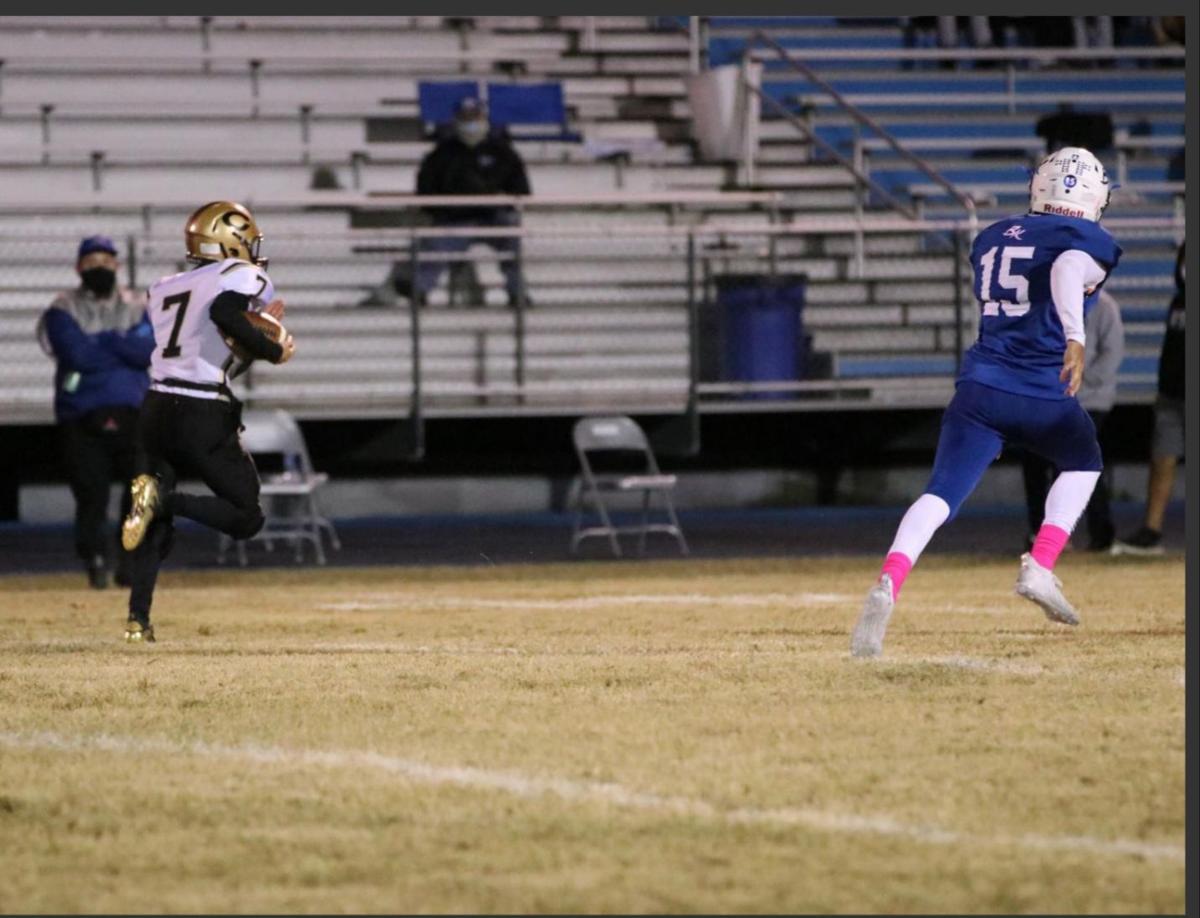 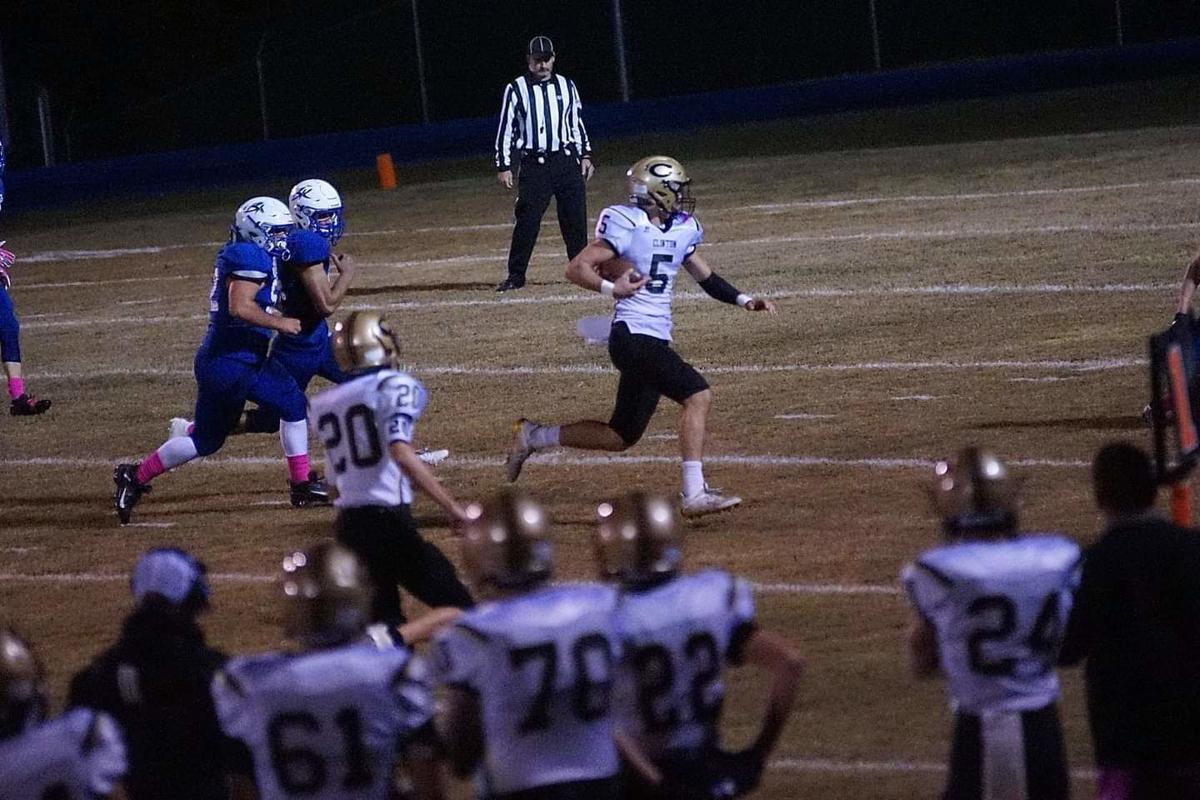 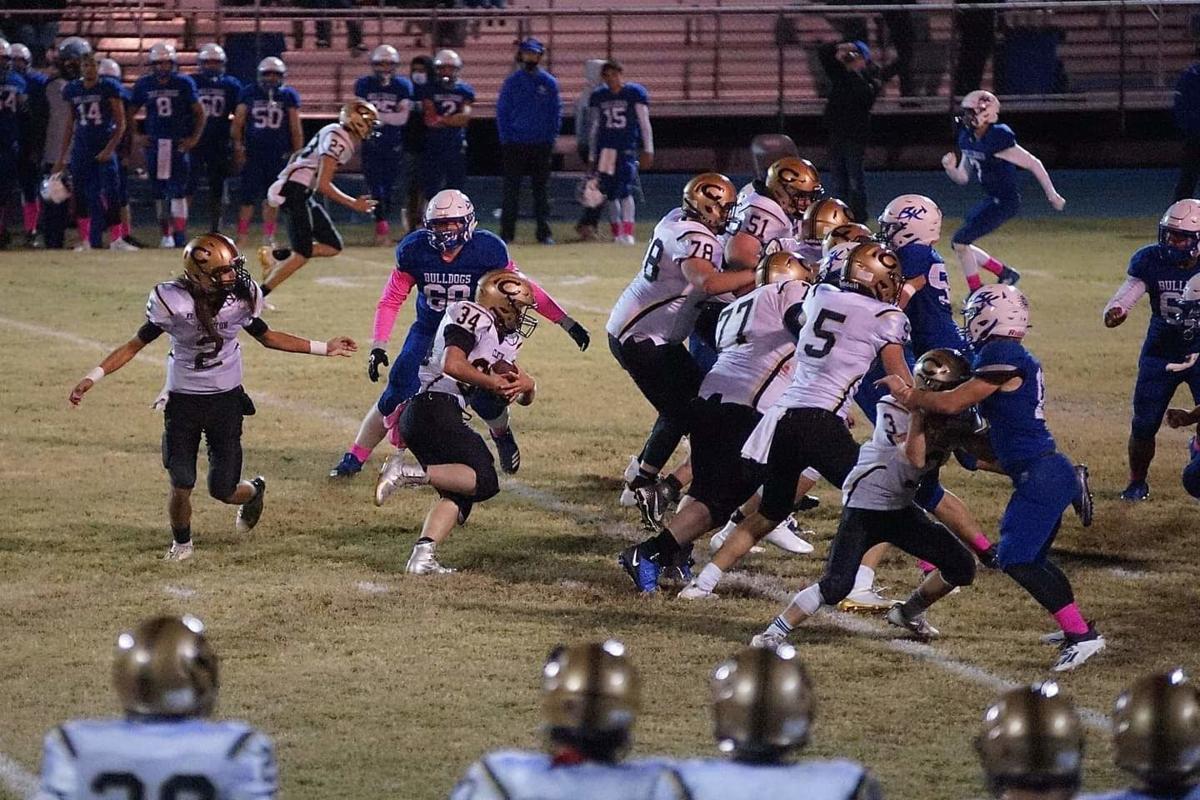 Jacob Hutto in the thick of it. 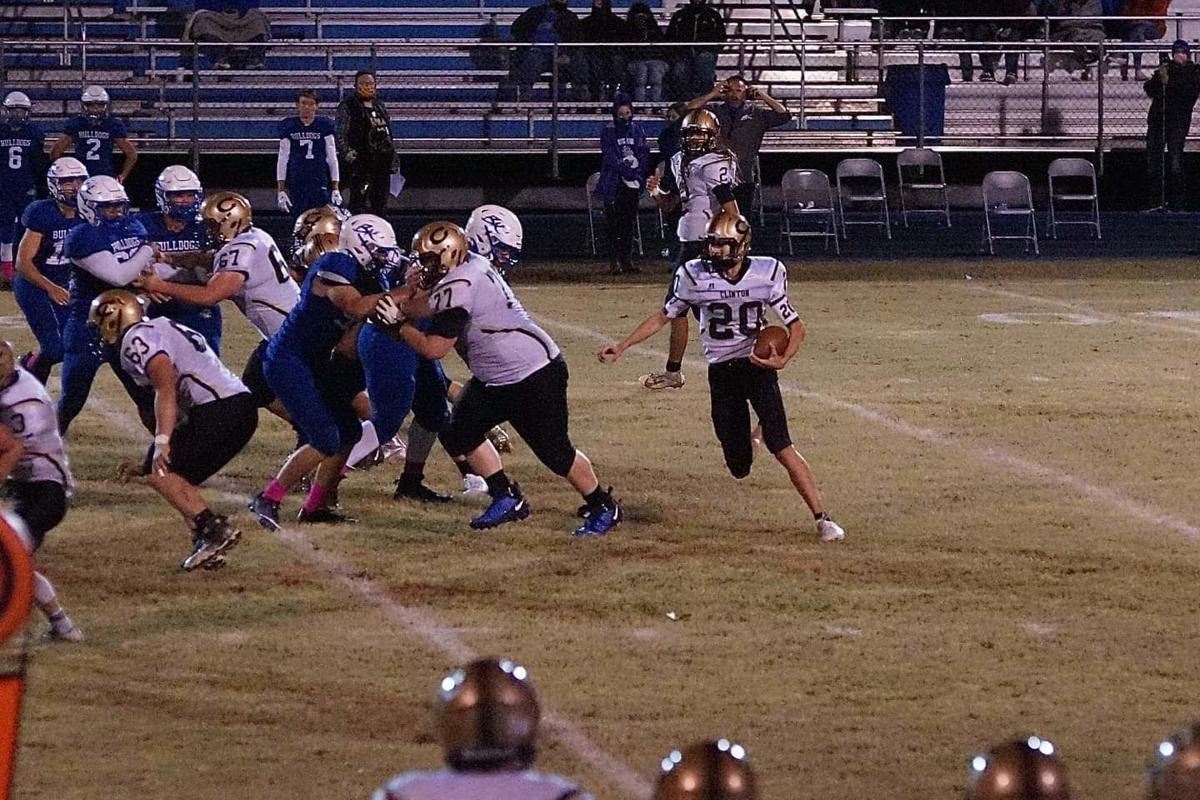 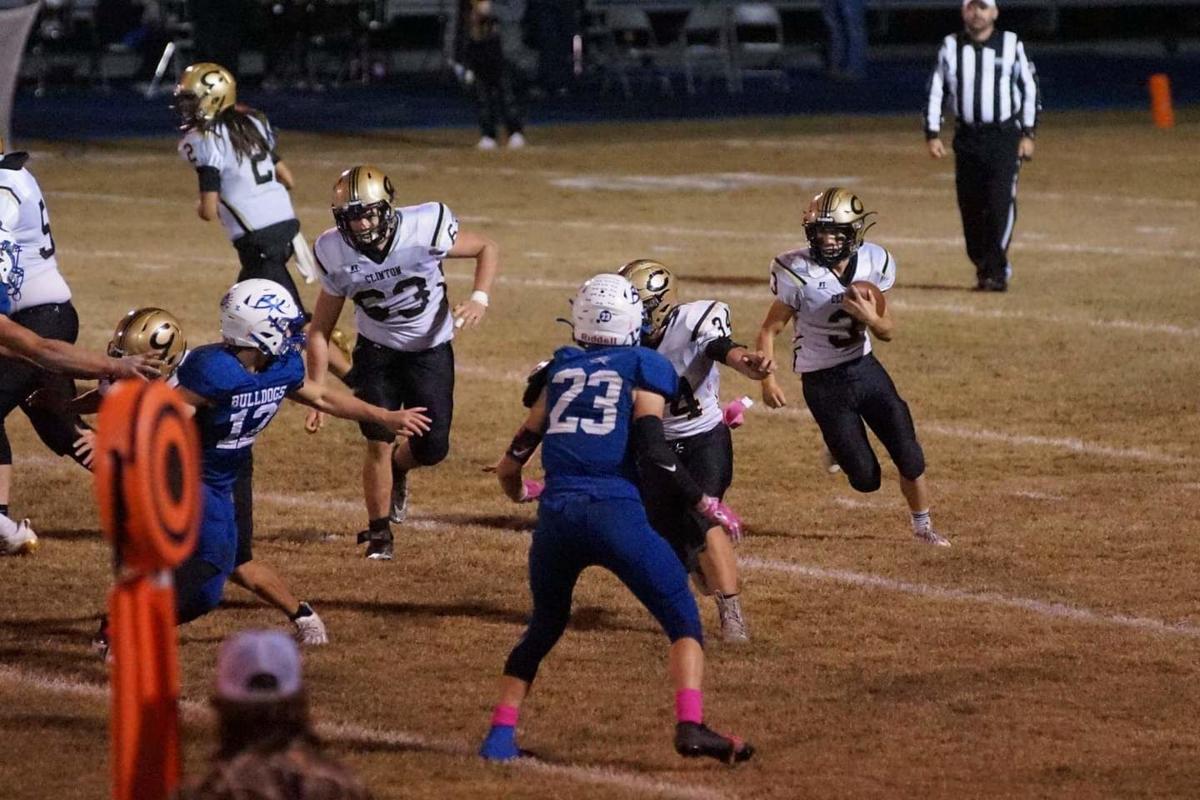 Jacob Hutto in the thick of it.

On a wet, windy, and cold night at Bald Knob it was a tale of two halves for the Clinton Yellowjackets in their 21-15 win over Bald Knob. The Yellowjacket offense scored all of its points in the first half building up a 21-9 lead while the defense held the Bulldogs offense to only 6 points in the second half to preserve the first victory of the season for Clinton. It was a great effort by the defense holding Bald Knob to only 15 points 10 points below their season average. The conditions throughout the game were difficult with a wet field due to a thunderstorm that came thru the Bald Knob area about two hours before kickoff. The game was played with a northwest wind gusting up to 17 miles per hour with temperatures dipping down into the low 50s before the game was over.

Clinton took the ball to start the game going into the wind. The Yellowjackets returned the kickoff out to the 28-yard line. The Jackets picked up four first downs in driving 72-yards in 5:09 for a touchdown. Pass receptions by Jasper Burgess, his first of six on the night, and Blaine Emberton set up a 12-yard pass from Harley Tobin to Burgess for the touchdown and the first lead of the night for Clinton. Aldrich Infanti kicked the extra point and the Yellowjackets led 7-0. Bald Knob started their first drive at their own 19 after good kick coverage by the Jackets. The Bulldogs moved quickly into Clinton territory before fumbling twice which they recovered, and an incomplete pass that stalled the drive at the 20-yard line. Marcus McGhee booted a 37-yard field goal with the wind to cut the Clinton lead to 7-3 with 3:30 left in the first quarter. The Yellowjackets were forced to punt on their next possession and a 9-yard punt into the wind set up Bald Knob at the Clinton 44-yard line. The Bull Dogs covered the distance scoring on a 13-yard quarterback keeper by Pierce Leason, with :10 left in the first quarter, to give Bald Knob their only lead of the game. The point after was no good and Bald Knob led 9-7.

Clinton now with the wind in the second quarter methodically moved down the field driving 77-yards to retake the lead. Nick Epley caught a 40-yard pass to get the Yellowjackets into Bald Knob territory. The biggest play of the drive came on 4th and 2 at the Bulldog 25-yard line. Tobin hit Epley in the flat for a 20-yard catch and run giving the Jackets a first down at the Bald Knob 5-yard line. Three plays later Tobin hit Blaine Emberton in the back of the endzone for the touchdown. Infanti’s extra point gave the Yellowjackets at 14-9 lead that they would never relinquish. The Clinton defense came up big on the Bull Dogs next possession as they drove to the Jackets 5-yard line before the Yellowjacket defense stopped the Dogs on 4th and 2. The Clinton offense could not move the football but a great kick by Infanti backed Bald Knob back to their 26-yard line. The Yellowjacket defense forced the Bull Dogs to punt into the wind. The 14-yard punt gave the Jackets great field position at the Dogs 34-yard line with 42 seconds left in the first half. A Burgess catch and two runs by Tobin move the ball to the 5-yard line. With 6 seconds left Tobin rolled to his right hitting Brody Emberton in the endzone for the touchdown. Infanti kicked the extra point giving Clinton a 21-9 lead heading into the locker room at half-time.

Bald Knob got the ball to start the second half going with the wind. Spencer Bannister intercepted a Bull Dog pass on the first play of the 3rd quarter. Penalties hampered the drive and Clinton turned the ball over on downs at the Dogs 30-yard line. Bald Knob with the wind then drove 70 yards for a touchdown. Sophomore quarterback Reece Moody hit Kody Waters on a 9-yard touchdown pass. The Extra point was no good leaving Clinton with a 21-15 lead with 3:44 left in the 3rd quarter. The Yellowjacket offense went cold having to punt on their final three possessions. The Jackets defense came up big each time. Jacob Hutto intercepted a Bald Knob pass early in the 4th quarter and later Clinton stopped the Bull Dogs on downs at the 25. The Bull Dogs final drive began at their own 42-yard line with 4 minutes left in the game and the Yellowjackets clinging to a six-point lead. The Dogs drove to the Jackets 30-yard line where they faced a 3rd down and 5. Moody scrambled before throwing the ball down field where it was intercepted by Epley at the 5-yard line. The interception was the third of the night and the fourth in the last two games for the Yellowjacket defense. The Jackets ran out the final minute on the clock and celebrated with their fans the first victory of the season.

Clinton is now 1-7 on the season and 1-4 in conference play. The Yellowjackets now turn their attention to Heber Springs and the Battle of the Little Red a series that dates back to 1939. The two teams will be coming off wins on Friday night. The kickoff for the 84th meeting between the Yellowjackets and Panthers will be 7 p.m. Friday at Jim Tumlison Field.