You have permission to edit this article.
Edit
HOME
Van Buren E-Edition
Obituaries
Share This
1 of 5 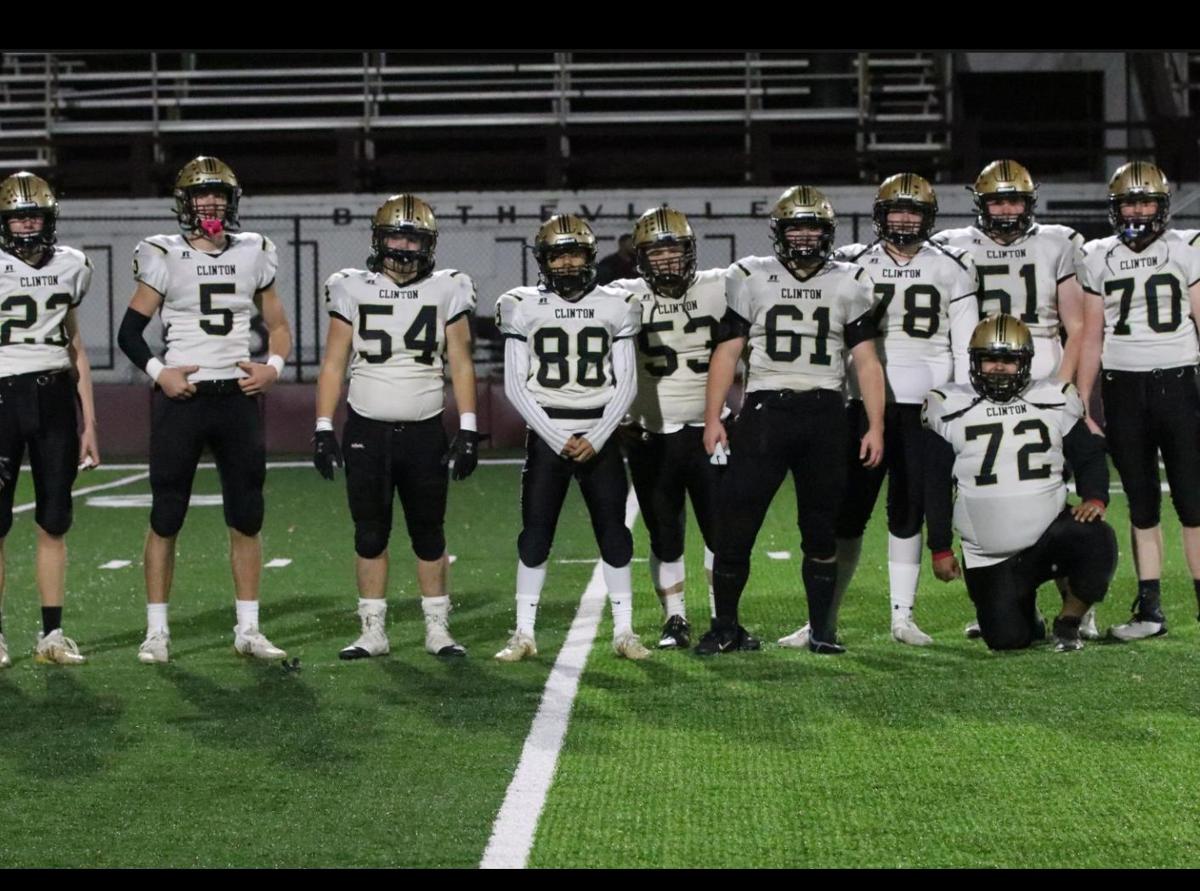 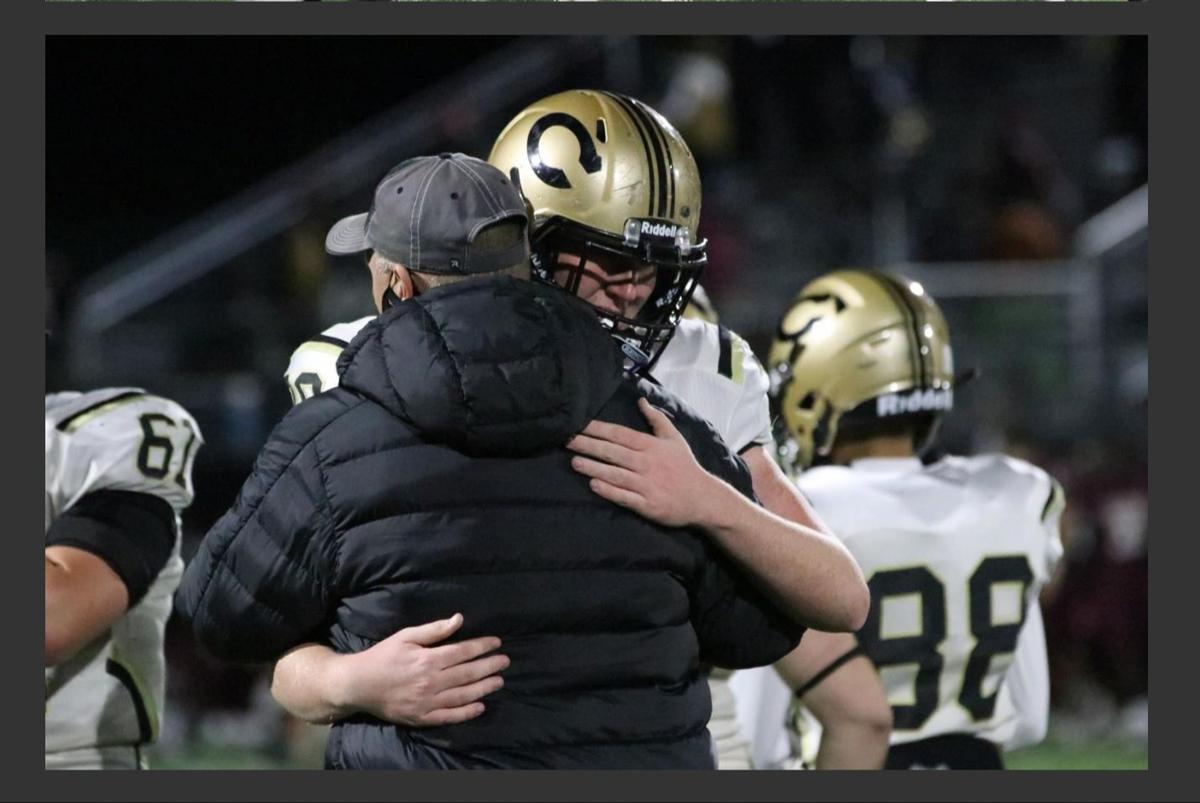 {div dir=”auto”}Coach Dufrene and a Yellowjacket Senior following the game..{/div} 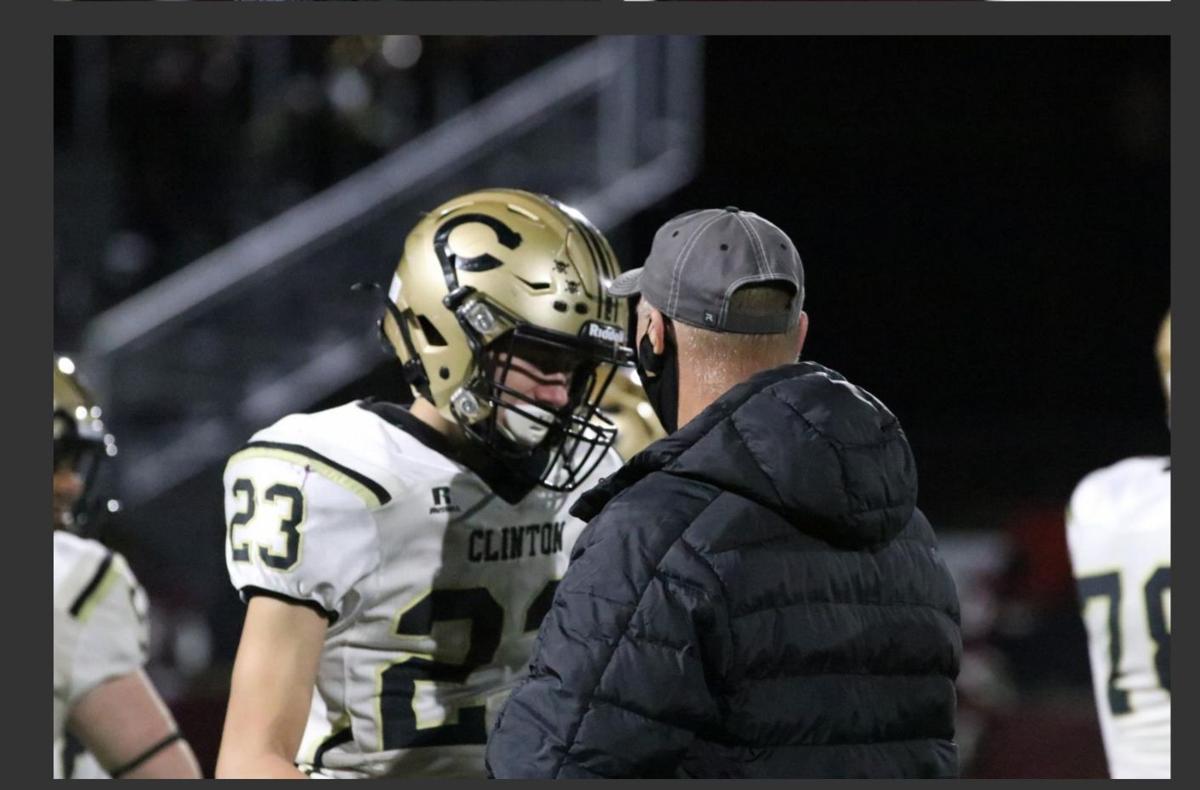 Coach Dufrene and Senior Blaine Emberton #23 after the game. 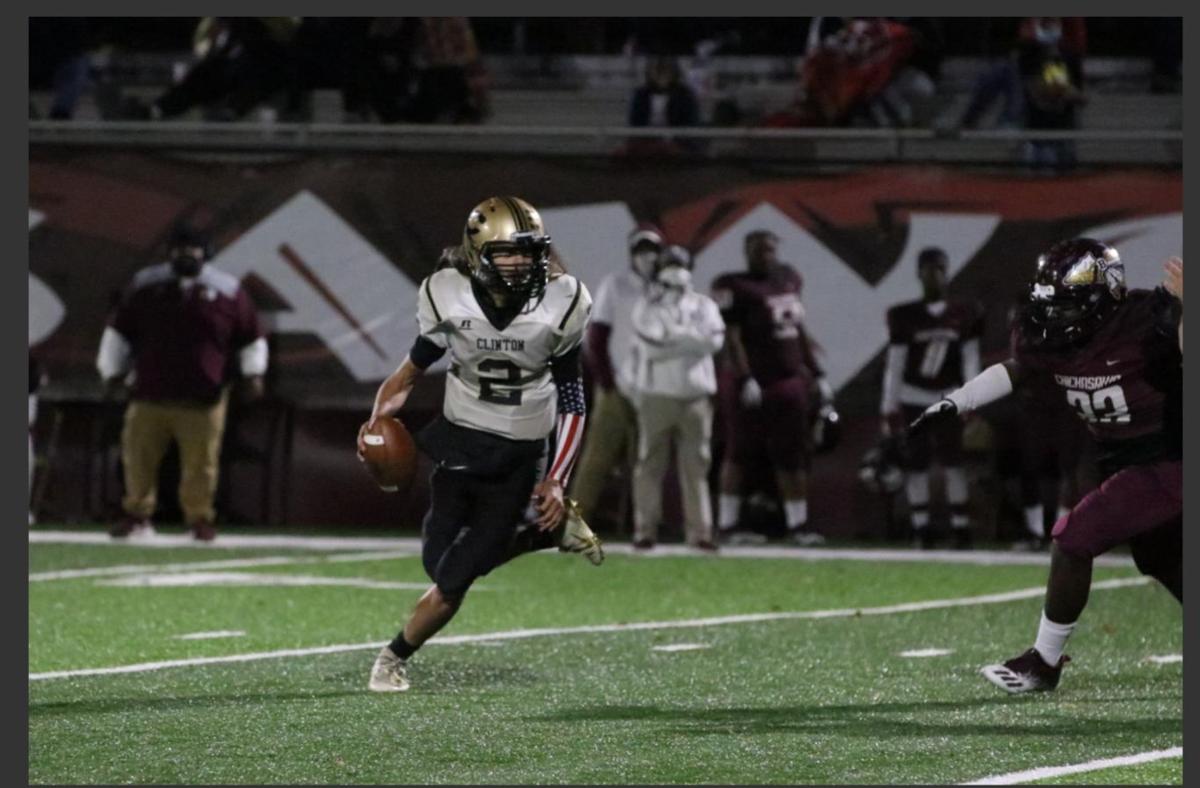 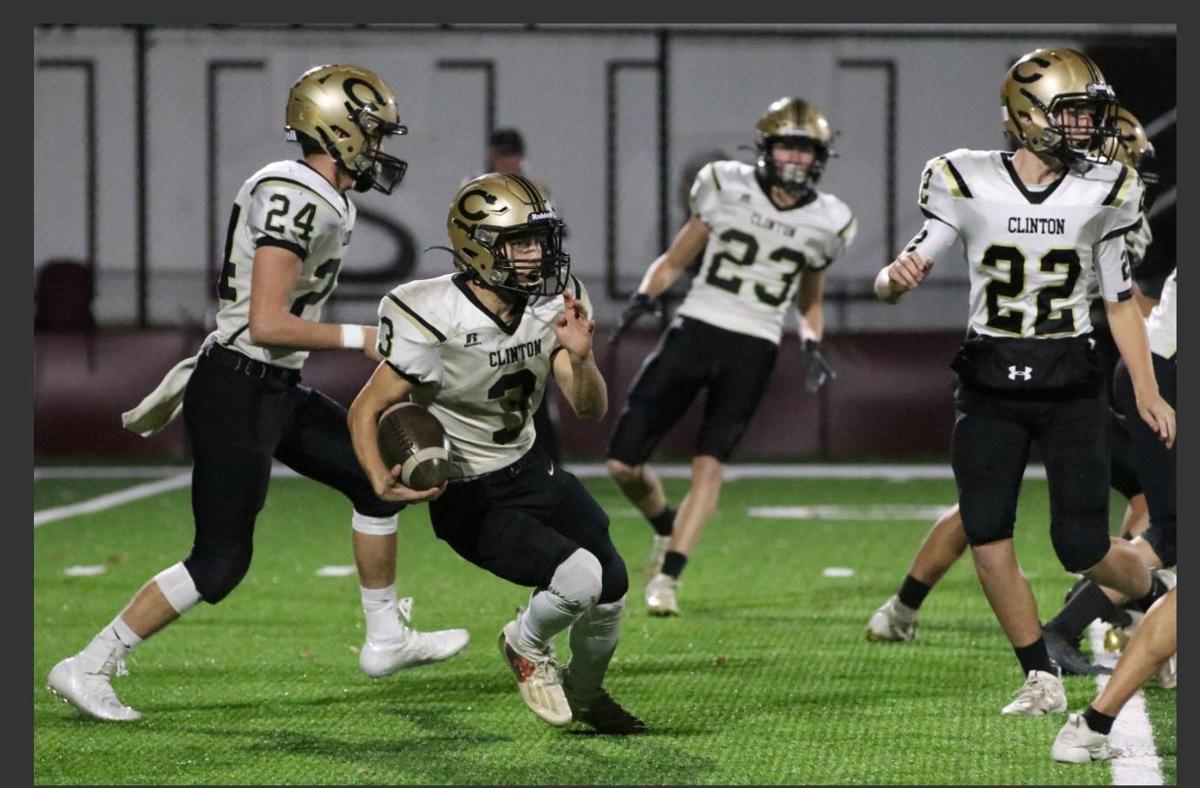 {div dir=”auto”}Coach Dufrene and a Yellowjacket Senior following the game..{/div}

Coach Dufrene and Senior Blaine Emberton #23 after the game.

One of the most unusual high school football seasons in history came to an end for Clinton on Friday night at Blytheville. The Chickasaws defeated the Yellowjackets 49-14 in the opening round of the Class 4A playoffs at Blytheville. The game opened with a bang with each team scoring on their first play of the game and was tied at 14-14 before Blytheville took over the game after a controversial call at the goal-line that denied the Jackets a touchdown.

The 1st round playoff game was the first ever meeting between Clinton and Blytheville. The 188 mile trip (376 mile round trip) by the Yellowjackets was the 3rd longest road trip in school history ranking behind a 201 mile trip to Junction City in 2017 and Clinton’s first ever football game in 1939, a 194 mile trip, to Piggott. It was a mild mid-November night in extreme northeast Arkansas, near the Bootheel of Missouri, with the temperatures in the low 50s at game time. The game was played at historic Haley Field built in 1939 by the Depression era New Deal WPA program.

Clinton got the ball to open the game and immediately scored. On the Yellowjackets first play from scrimmage Harley Tobin hit Blaine Emberton on double reverse flea flicker pass for a 66-yard touchdown. Aldrich Infantis extra point gave the Jackets a 7-0 lead after only 14 seconds of the 1st quarter. The Clinton lead did not last long as Blytheville answered on its first play from scrimmage as Jerimiah Northern hit Tavares Townsend on a 63-yard touchdown pass. A bad snap on the extra point was picked up by the holder who threw a pass that turned into a 2-point conversion giving the Chickasaws an 8-7 lead with only 30 seconds gone in the first quarter. The Yellowjackets came right back driving 65-yards for a touchdown and retaking the lead. A 21-yard pass play to Jasper Burgess and a run by Nick Epley set up a 6-yard Cody Davis touchdown. Infantis extra point put the Jackets up 14-8 with 9:15 left in the first quarter. The Jacket defense stopped Blytheville on fourth down at the Clinton 43-yard line on its next possession. The Clinton offense moved the ball to the Chickasaws 1-yard line with a mixture of running and pass plays along with the aid of a pass interference penalty. Harley Tobin kept the ball on a quarterback sneak in an attempt to give Clinton a 14-point lead. Tobin and the offensive line surged toward the goal line. No immediate call was made by the officials as to either a touchdown by Tobin or his forward progress being stopped. A Blytheville player eventually came out of the pile with the football and it was declared a fumble. Video after the game showed no apparent fumble. The Chickasaws took advantage of the break and drove 75-yards for a touchdown on Northerns 23-yard touchdown run with 17 seconds left in the first quarter. The extra point was no good and the game was tied 14-14.

Early in the second quarter Clinton once again drove deep into Blytheville territory. The Yellowjackets converted a 3rd and 15, a 3rd and 5, and a 3rd in 9 on the drive reaching the Chickasaws 5-yard line. The drive ended at the 5 on downs as the Jackets could not get in the endzone. On Blytheville first play Northern threw an 89-yard pass to Kylen Wells giving the Chickasaws a 21-14 lead a lead they would never relinquish. A Clinton punt on its next possession led to another Blytheville touchdown. A 32-yard touchdown pass from northern to Townsend and Wells 2-point conversion increased the Chicks lead to 28-14. Blytheville added one more score before the half on a 67-yard interception by Townsend for a touchdown. LaMont Jackson’s 2-point conversion gave Blytheville a 36-14 lead at the half.

The second half belonged to Blytheville. The Chickasaws got touchdowns from Jackson and Tyree Thurman in the 3rd quarter. The Yellow jacket offense could not get much going in the 2nd half, but the defense held the Chicks to only 14 2nd half points and scoreless in the 4th quarter.

The Yellowjackets ended this unusual high school season with a 2-9 record overall and 2-5 in conference play. Due to the Covid-19 Pandemic the team missed spring practice and summer 7 0n 7 competitions as well as team camp which would have been very valuable to this predominantly young team. All athletic facilities were closed from late March until June 1st and players could not practice in helmets and pads or use the fieldhouse until the first week of August. The virus affected the Jackets early in the season as the team was without 18 players, who were either quarantined or injured, when they visited Huntsville in week two. The coaching staff did a good job of blending the many new players with the returning players and the team got better each week playing its best football at the end of the season.

It was the 5th straight season for Clinton to make the playoffs extending the longest playoff streak in school history. It was the final game for nine Yellowjackets seniors. The senior class ends their career with 23 wins only three senior classes in the last 20 years have won more games. The class also made 3 playoff appearances, winning 2 playoff games, and winning a conference championship. This class also ends their high school careers with three wins in the Battle of the Little Red over Heber Springs. The Yellowjackets look to build off the late season success of this year’s team as it looks toward 2021. The Jackets will return most of the skill players for next season, including the quarterback, but will be looking to replace several linemen on both offense and defense.