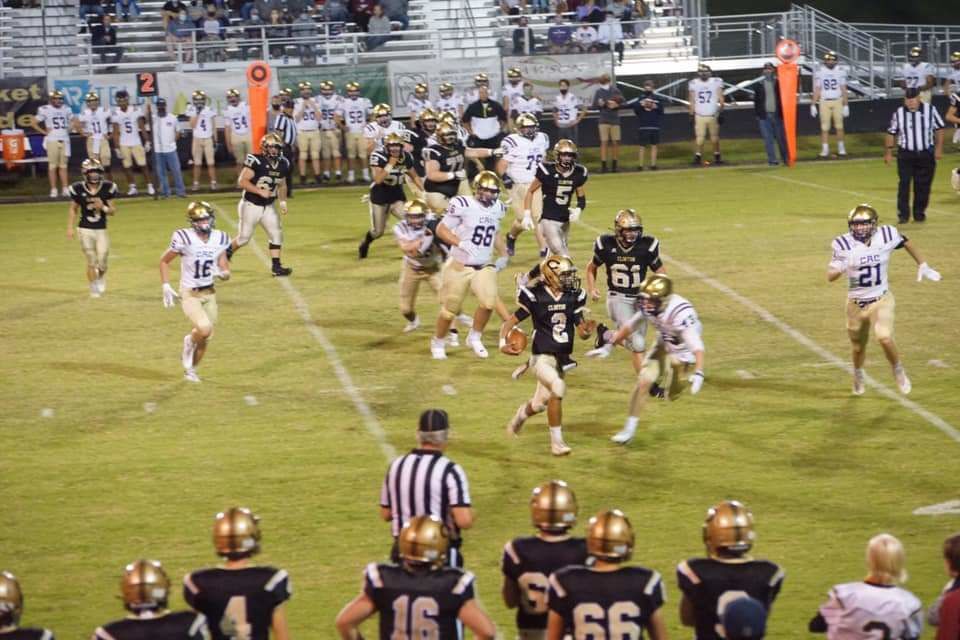 #2 Harley Tobin on the run 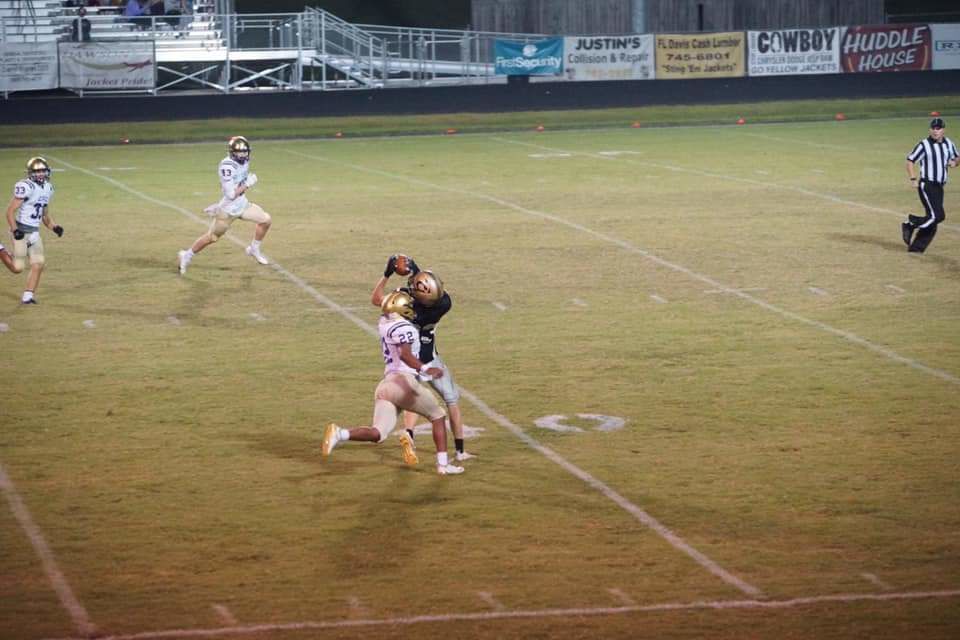 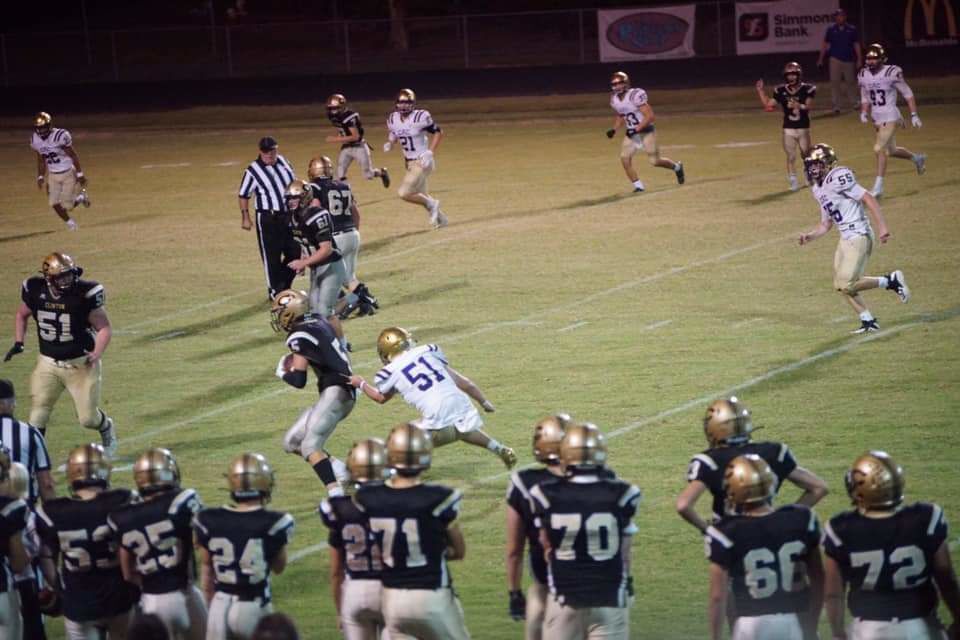 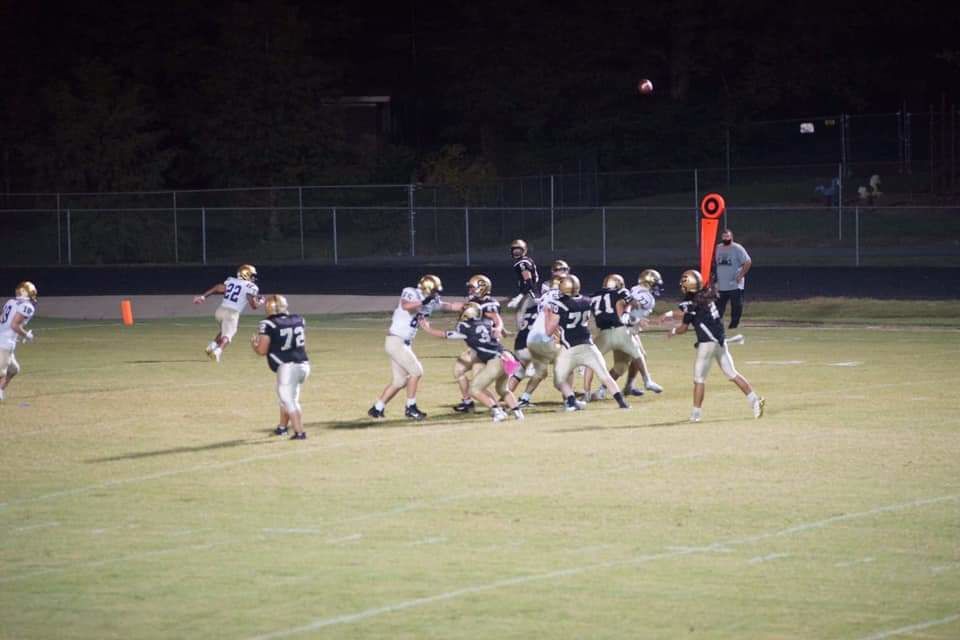 #4 Touchdown pass from Tobin to Burgess

#2 Harley Tobin on the run

#4 Touchdown pass from Tobin to Burgess

The Clinton Yellowjackets opened conference play on Friday night against the 14th ranked Central Arkansas Christian Mustangs at Jim Tumlison Field. The Yellowjackets had their best overall performance of the season but came up short on the scoreboard losing 47-35. The Jackets fell behind by 19, 26-7 at the half before outscoring the Mustangs 28-21 in the second half. The early season game also served as Senior Night for all fall sports and spirit squads due to the threat of the Covid-19 virus possibly cutting the season short.

The 4-0 Mustangs were the only team to score in the first quarter. CAC’s outstanding running back Tyler Williams capped off a 48-yard drive with a three-yard touchdown run but the extra point was no good giving the Mustangs a 6-0 lead with 7:15 left in the first quarter. CAC was threatening to score again when Jasper Burgess made a leaping one-handed catch to intercept a would-be Mustang touchdown at the goal-line.

In the second quarter CAC extended the lead to 20-0 on two long pass plays from quarterback Palmer Gilbrech to receiver Jackson Richmond. The first touchdown pass was for 75 yards and the second was for 62 yards. Isaac Rine added two extra points. Clinton unable to do anything on their first 5 possessions of the game took over at the Mustang 44-yard line after a good kickoff return. Harley Tobin hit Nick Epley on well thrown 35-yard pass for the Yellowjackets first touchdown of the game. Aldrich Infanti added the extra point to cut the CAC lead to 20-7. The Mustangs answered the Jacket touchdown with one of their own driving 55 yards with Williams coring on a 1-yard run with :19 seconds left in the first half. The extra point attempt was no good making the half-time score CAC 26 Clinton 7.

The Clinton offense came alive in the second half behind the throwing and running of Tobin, the running of Epley and Hutto and the pass receiving of Blaine Emberton and Burgess. Clinton scored on its first possession of the second quarter on a Cody Davis 2-yard touchdown run to finish off the best drive of the season of 72 yards. Infanti kicked the extra point cutting the CAC lead to 12 at 26-14. The Mustangs answered the Yellowjacket touchdown again with Williams scoring his third touchdown of the game on a 10-yard run. The Rine extra point made the score 33-14. The Jackets came right back driving 55 yards for a touchdown. Jacob Hutto scored the touchdown on a one-yard run and then caught a two-point conversion pass from Tobin to cut the lead to 11, 33-22 with 1:10 left in the third quarter.

Each team had the ball twice in the fourth quarter scoring on all four possessions. Ethan Demarco would score on a 7-yard run to put CAC up 40-22 with 8:53 left in the game. Hutto would score his second touchdown of the game on a 2-yard run to end a 65-yard drive for Clinton, Infanti’s point after made the score 40-29 at the 6:44 mark of the fourth quarter. Palmer Gilbrech’s third touchdown pass of the game to Richmond capped off a 51-yard drive for the Mustangs. The 20-yard pass and extra point made the score 47-29. The Yellowjackets scored on their final possession of the game driving 48-yards and scoring with :06 seconds. The score came on a great pass by Tobin and an even better leaping catch by Burgess in the corner of the endzone, after the unsuccessful 2-point attempt the final score was CAC 47 Clinton 35.

Clinton is now 0-4 on the season for the first time since 2000 and 0-1 in conference 2-4A play. The Yellowjackets will be on the road next Friday as they travel to Independence County to take on the Southside Batesville Southerners. Each team will be looking for their first conference win of the season. Southside 1-3 on the season was shutout last week by Stuttgart 42-0.