You have permission to edit this article.
Edit
HOME
Van Buren E-Edition
Share This
1 of 6 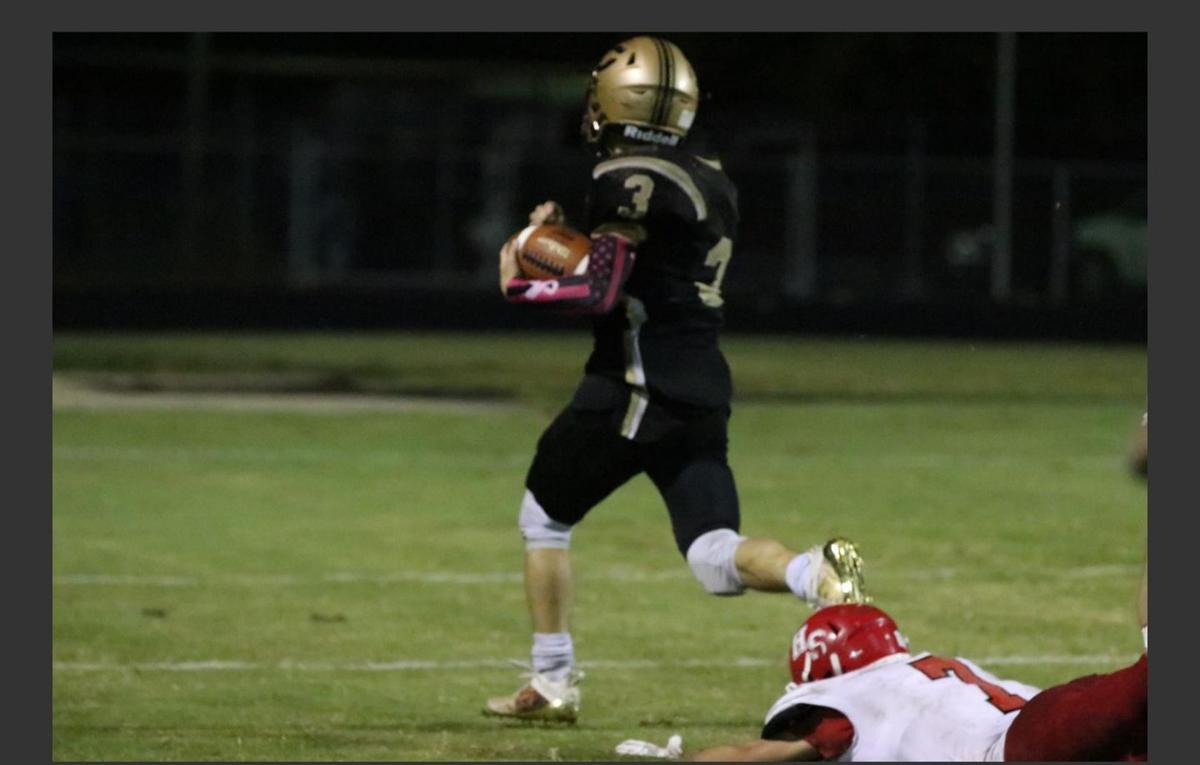 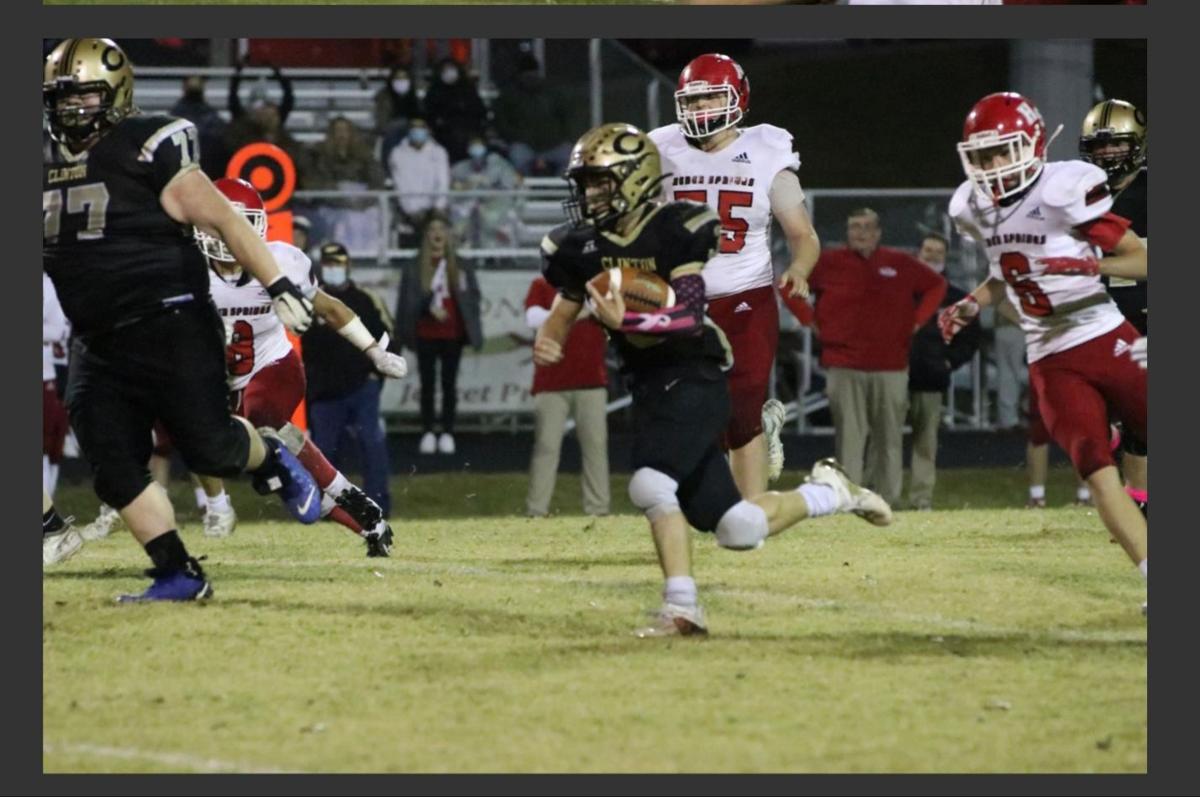 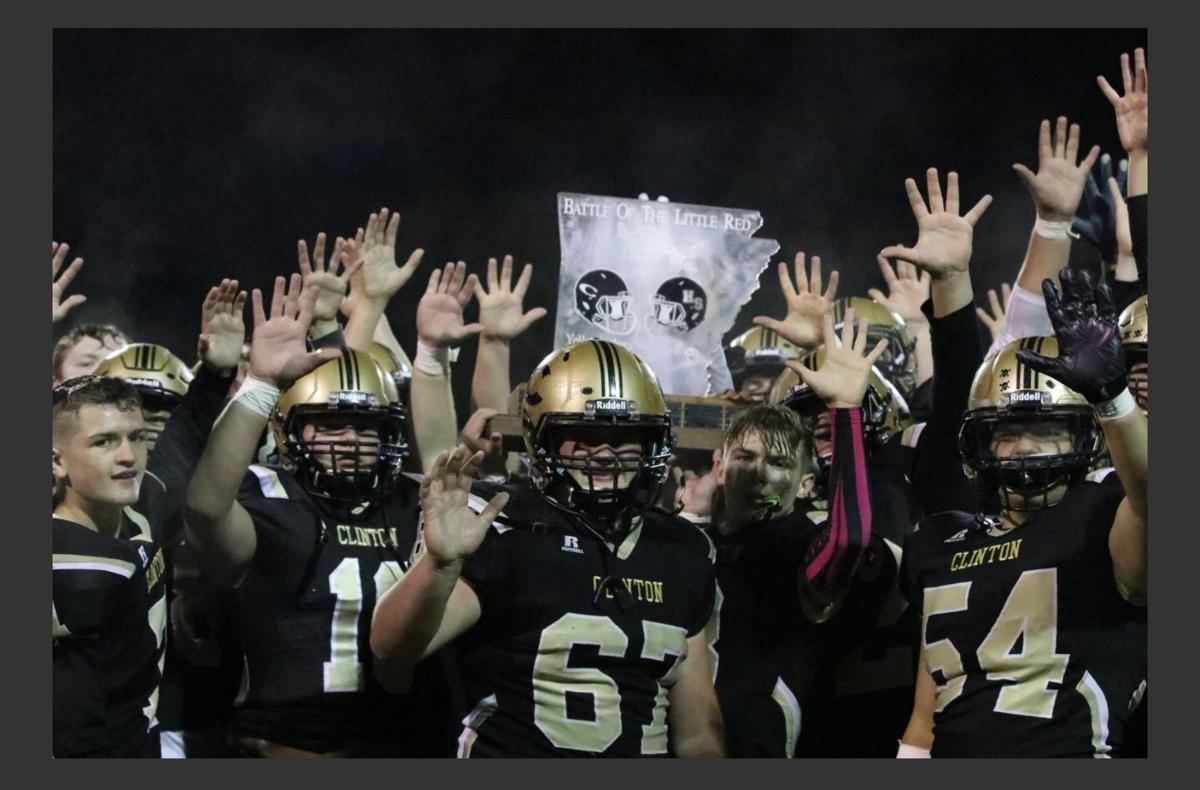 Yellowjacket seniors with the trophy. 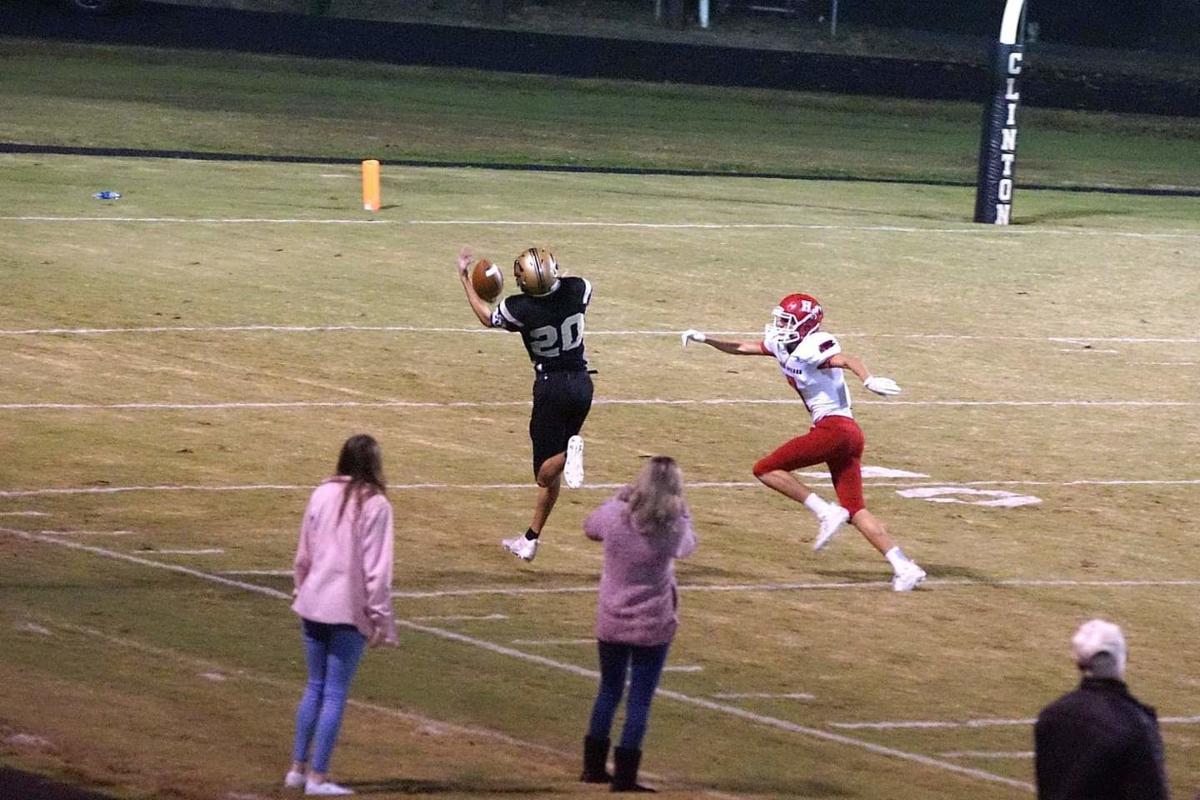 Brody Emberton #20 with catch in 1st half 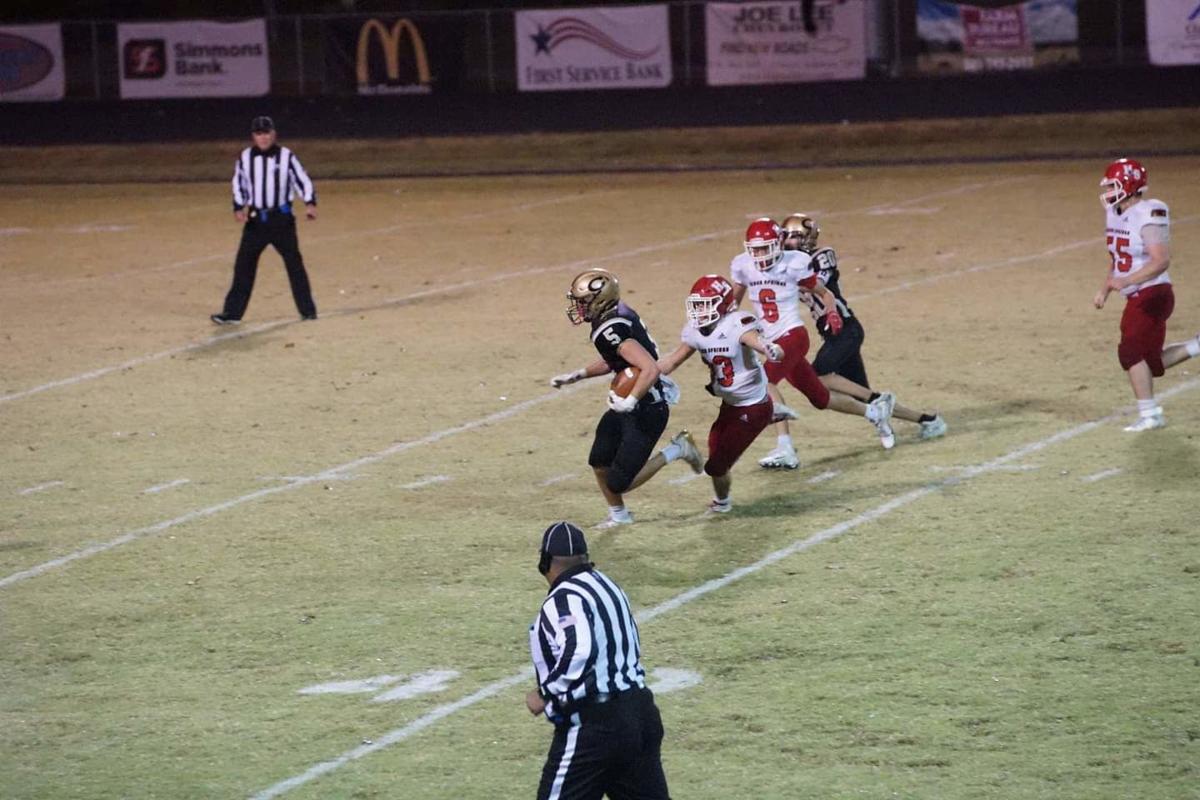 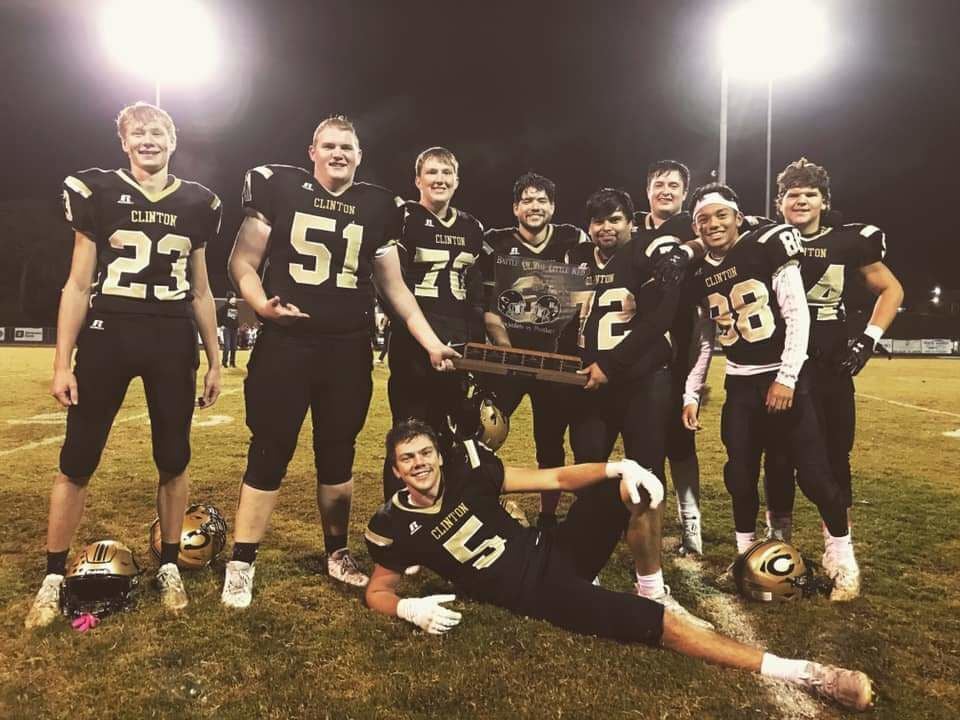 Yellowjacket seniors with the trophy.

Brody Emberton #20 with catch in 1st half

The 84th meeting between Clinton and Heber Springs turned out to be another barn burner and for the second straight year the game was not decided until the final seconds. Nick Epley’s 52-yard run with :50 left in the game broke a 26-26 tie and completed the Yellowjackets come from behind victory. Epley’s run came 50 years to the month that Clintons James Washington raced 71 yards in the final minutes to beat Heber Springs in 1970. It was the 5th straight victory for the Yellowjackets over Heber Springs. The game was played before a large crowd on a cool late Fall full moon night at Jim Tumlison Field. It was the final regular season home game for nine Yellowjacket seniors.

Clinton began their opening drive of the game at their own 41-yard line. The Yellowjackets drove right down the field with the big play of the drive being a great pass and catch for 29-yards on 3rd and 3 from Harley Tobin to Brody Emberton down to the Heber Springs 10-yard line. The Jackets moved the ball to the 3-yard line where Jacob Hutto carried it in for the first Clinton touchdown of the night. Aldrich Infanti’s point after kick gave the Yellowjackets a 7-0 lead. The two teams traded scoreless possessions until the Jackets recovered a Panther fumble at the 50-yard line. Clinton was unable to take advantage of the turnover with Heber stopping the Yellowjackets on 4th down at the Panther 43-yard line. Heber Springs then mounted its first scoring drive of the night going 57-yards on the drive and scoring on a Diego Rubio touchdown run, Gus Hannahs extra point tied the game 7-7 with 8:43 left in the 1st half. The Jackets next drive started at their own 33-yard line. Clinton moved the ball into Heber territory before the drive stalled at the 26-yard line. Infanti came on to kick his first field goal of the season, a 31-yarder, giving the Yellowjackets a 10-7 lead with 4:07 left in the half. The Panthers used 3 minutes and 45 seconds in driving 63-yards for a touchdown. The touchdown came on a 20-yard pass from quarterback Mathew Cook to Easton Cusick, the point after made the score 14-10 Heber with just :38 left in the half. The Jackets were not through just yet taking over at their own 41-yard line with no time outs left. On the first play Epley got 21-yards and out of bounds at the Panthers 38-yard line. Tobin hit Brody Emberton for 15-yards down to the Heber 23-yard line, an incomplete pass stopped the clock with six seconds left in the half. The Yellowjackets without a timeout ran the field goal unit on the field with the clock running down on the play clock. The Jackets got the snap off with just 2 seconds left on the clock and Infanti booted a 40-yard field goal to cut the Panthers lead to 14-13 and sending Clinton into the locker room at halftime with momentum.

Heber Springs recovered a Clinton on-side kick to start the second half putting the Panthers in good field position at the Yellowjacket 47-yard line. Rubio capped off the Panther scoring drive with a 1-yard run, but the 2-point conversion was no good making the score Heber Springs 20 Clinton 13. The Jackets, who moved the ball at will on the ground in the 2nd half, drove 75-yards before turning the ball over to Heber on a fumble at the Panthers 1-yard line. The Clinton defense came up big forcing Heber Springs to punt out of their own endzone. The Yellowjackets took possession at their own 34-yard line. The Jackets drove 66-yards with Harley Tobin scoring on a 1-yard quarterback sneak. The point after attempt was no good and with 2 seconds left in the 3rd quarter Clinton trailed 20-19 setting up a memorable 4th quarter.

The Yellowjacket defense again stopped Heber Springs on downs this time at the 50-yard line. The Jackets picked up 3 first downs in moving the ball to the Panthers 10-yard line before turning it over again on a fumble. Heber Springs gambled and went for it on 4th down and four at their own 16-yard line and it payed off as Cook took the quarterback keeper 84 yards for a Panther touchdown. The 2-point conversion was no good and Heber now led 26-19 with 5:30 left in the game.

Clintons next possession started at their own 37-yard line. On first down Tobin hit Jasper Burgess over the middle for a 28-yard gain. Two plays later Tobin hit Blaine Emberton on a slant for 13-yards down to the Heber Springs 21-yard line followed by a 21-yard touchdown strike to his brother Brody Emberton for the touchdown. Infantis extra point tied the game at 26 with only 3:48 remaining in the 4th quarter. Heber returned the kickoff up to the 29-yard line and picked up one first down before the Yellowjacket defense forced the Panthers to punt. Epley returned the punt 3-yards up the 28-yard line with 1:25 left in the game. Tobin hit Epley on a short pass but Epley shook off a Panther defender and picked up 17-yards up to the 45-yard line. On 3rd down and 7 at the Clinton 48 with 1:01 left in the game Epley took a handoff on the right side and angled his way to the left breaking the line untouched and out racing four Panther defenders to the endzone giving the Yellowjackets the lead. Infantis extra point was no good leaving the Jackets with a precarious six-point lead 32-26 with :50 seconds left. The Jackets tackled the Panther kick returner at the Heber Springs 38-yard line. Two pass completions and a penalty moved the ball to the Clinton 25-yard line with :11 left in the game. Heber got off two final plays both incomplete passes the second near the Yellowjacket goal line that was broken up by Spencer Bannister and Epley setting off a celebration as the Clinton players raced onto the field and bedlam ensued in the bleachers.

Clinton is now 2-7 on the season and 2-4 in 2-4A Conference action and have won two straight games. Clinton now leads the all-time series with Heber Springs 41-38-5. The two teams first met in 1939 and a sixth straight win by Clinton next season would match their longest winning streak in the series when the Yellowjackets won six in a row from 1945 to 1949 and again from 2000-2005. The six-point win by the Jackets was the 25th time in the series the game has been decided by a touchdown or less and the game has finished in a tie five times. Next week the Yellow jackets travel to Lonoke to finish the regular season with kickoff set for 7 p.m. Friday night.