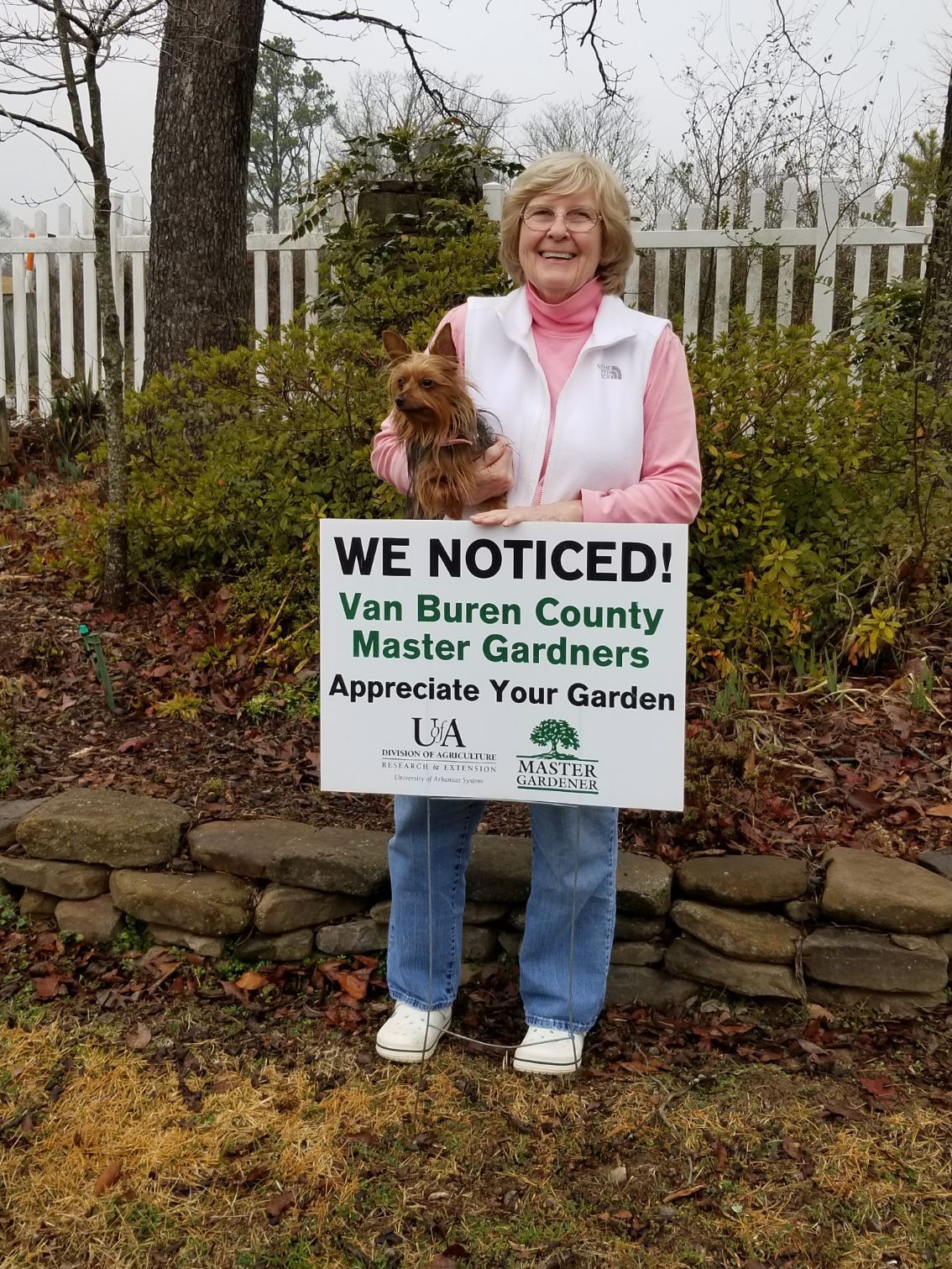 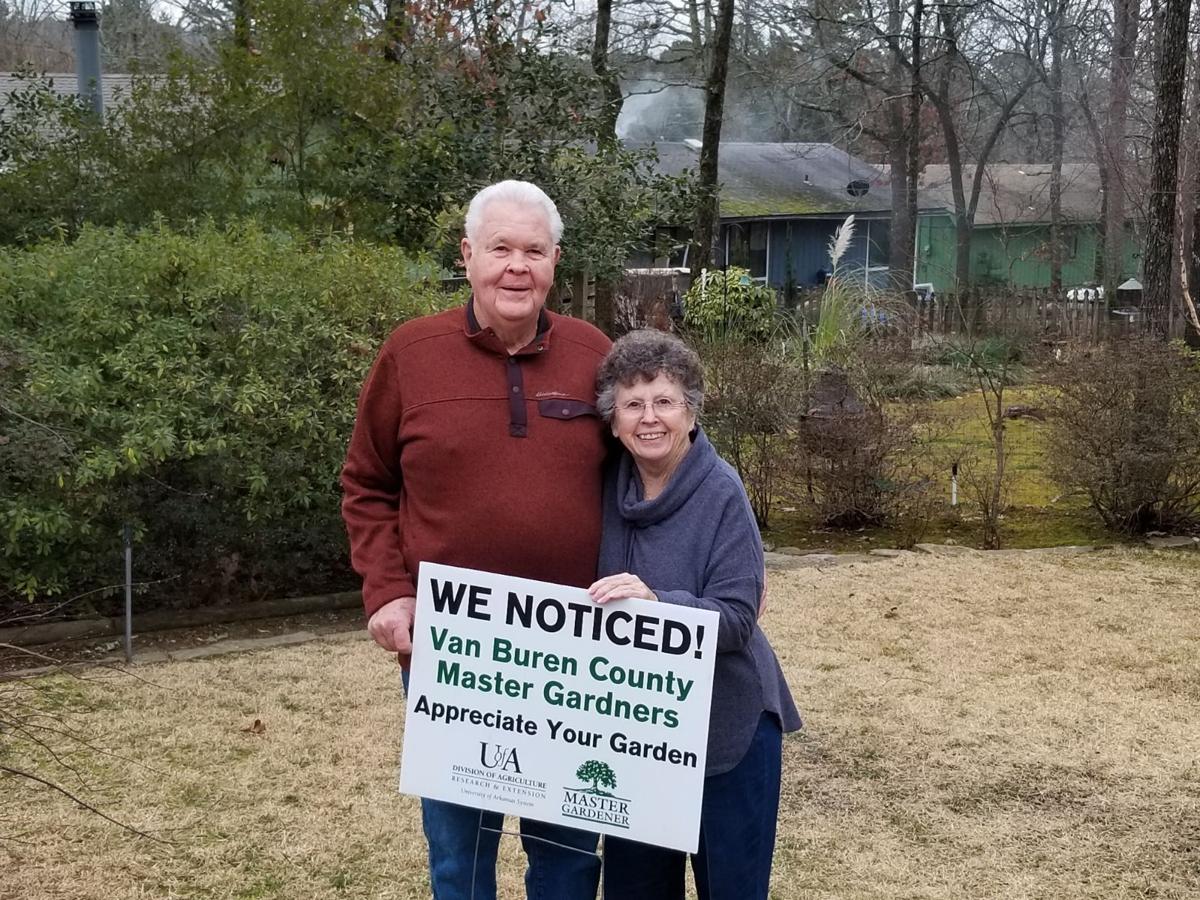 The Van Buren County Master Gardeners were out on Sunday on patrol for the ‘We Noticed’ program. We had a great plan, armed with nominations and ready to visit the gardens. Well, there was no answer at one place, and we rescheduled the second one for Tuesday. So, we spontaneously stopped by a house that we had noticed....and were we surprised.! We had noticed the roses that Selma and Cliff Mitchell of Fairfield Bay have surrounding their front yard. We were surprised to see a fully landscaped and beautiful back yard as well. Selma and Cliff have lived in their house since 1999. They usually winter in southern Texas, but this year they stayed home. This lovely couple invited us in from the cold and not only shared their garden, but also stories of how the garden has changed over the years. One story was about a large pond and waterfall that was in the front yard. They had stocked it with fish, but the fish kept disappearing. They could see no evidence of who or what was taking the fish. Finally, one sunny day they caught a glimpse of a snake living under the waterfall. He had been having a feast. Needless to say, they no longer have that pond or the fish. Selma provided pictures of what the yard looked like in the summer. Walking out the back door we stood on a large, covered deck, overlooking the garden and the birds that were happily enjoying the bird feeders. They have done a lot of work, and that deck is a perfect place to sit and enjoy the fruits of their labor. Congratulations on a job well done.

The second recipient of the ‘We Noticed’ award is Audrey Raines of Bee Branch. She was nominated by Donna Ozment. We drove and drove, and then nearly at the end of the road, we found heaven. This was one of those places where our mouths just fell open in disbelief. She started to build this house in 2008 and it finished in 2010. That is when she started the yard. There is a beautiful picket fence in the front yard that is the backdrop to a flower garden that spans the length of the front yard. At the end...and just outside the picket fence...is an exceptionally large rock. Audrey has used this rock as the floor of a little sitting spot, that was surrounded by its own little garden. In the back of the house there was a spectacular view of the valley. To one side there was a shade garden, with arbor entrances and a stone walkway. Then there was her vegetable garden. It was fenced and terraced. She had blueberries, raspberries, figs, blackberries, muscadine grapes and much, much more. She planted it partially so that her grandchildren could come and enjoy it. She also has a hot house, where she has lettuce ready to eat and has started many other things. One of the most amazing things to me is that she is a single lady who has done most of this work by herself. She is an inspiration to me. One other thing was that she had put together a slide show of her yard for our enjoyment. That was so special. I feel like gardeners are some of the nicest people and Audrey is no exception. Thank you so much for making us feel so welcome in your piece of heaven.

Many gardens won’t be this large, but even the small ones are special. We are running low on nominations so please consider sending me a message with your nominee. Send it to birdies_nest2004@yahoo.com It can be a large yard, or a small flower bed, or even some nicely trimmed trees. If you enjoy it, then we will also enjoy it. I would enjoy seeing the ones in different parts of the county...on roads that we would never think of going down.