Skip to main content
You have permission to edit this article.
Edit
HOME
Van Buren E-Edition
Obituaries
Share This
1 of 4 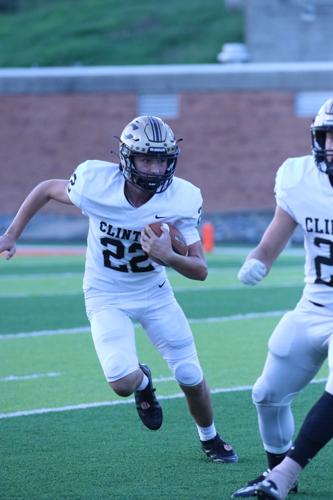 Landon Rose (No. 22) scored three touchdowns on the night. 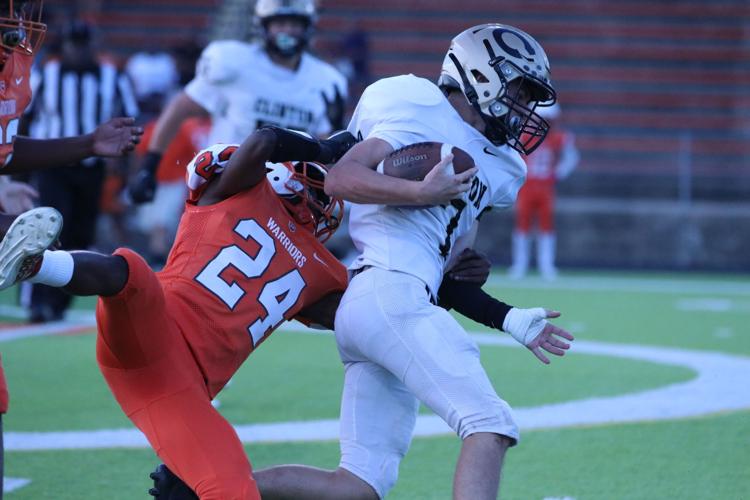 Spencer Bannister (No. 7) breaks a tackle. 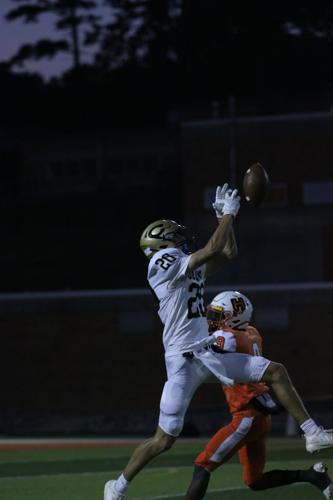 Brody Emberton (No. 20) with one of his three catches. 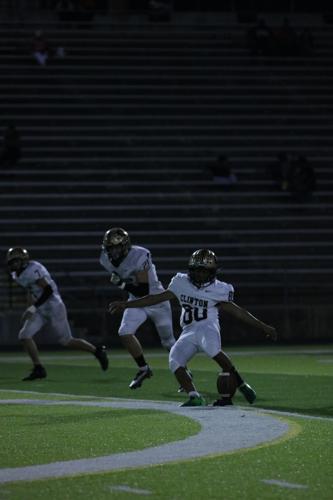 Steven Martinez (No. 80) kicks off for Clinton.

Landon Rose (No. 22) scored three touchdowns on the night.

Spencer Bannister (No. 7) breaks a tackle.

Brody Emberton (No. 20) with one of his three catches.

Steven Martinez (No. 80) kicks off for Clinton.

The Clinton Yellowjackets have played football since 1939 but never once in that long history had they played the historic football power Little Rock Hall. Hall created in the 1950s and owners of seven state championships were no match for the Jackets on Thursday as Clinton ran and passed their way to 50 first half points. The Yellowjackets had five different players score in a game for the second time this season and rolled up 326 total yards of offense in the 57-20 win played at Scott Field in midtown Little Rock. The game was televised statewide as the Fearless Friday Game of the Week.

The weather was much better this week than last week’s weather delayed game with Heber Springs. Thursday night the game was played under clear skies with comfortable temperatures as the sun went down. Clinton took the ball first and immediately drove deep into Hall territory before turning the ball over to the Warriors on a fumble. In one of the few bright spots for Hall Jakorie Forman Carter threw a 75-yard pass to Cameron Marble on the Warriors third play of the game for a touchdown. The point after was no good. Clinton once again marched into Halls end of the field and would take a lead, they would never relinquish on a 2-yard touchdown pass from Jobe Chalk to Zane Widner. Landon Rose’s 2-point conversion made it 8-6 Clinton. The Yellowjackets would score 30 straight points before Hall would score again. The Jackets got two touchdowns from Landon Rose from 7 and 1 yards respectively and a 10-yard touchdown run from Bryston Venable during that stretch. Hall picked up their second touchdown of the night on a Joshun Crawford 75-yard kickoff return for a touchdown to make the score 30-12. Clinton would then score 20 more points before the half as Rose picked up his 3rd touchdown of the night on a 2-yard run, Widner scored his 2nd touchdown of the game on a beautiful 71-yard run in which Zane displayed both his speed and power, and Brody Emberton got in on the action with a spectacular 60-yard punt return for a touchdown to end the first half scoring for the Yellowjackets. The Jackets headed to the locker room at the half leading 50-12.

The second half was played with a running clock due to the 35-point sportsmanship rule. Each team would score a touchdown in the crisply played second half. Hall got on the board on Marbles second touchdown of the game on a 28-yard pass from Larry Davis. The final score of the game for Clinton came on a Kamron Scott 6-yard run. Steven Martinez’ 3rd extra point of the game made the final score Clinton 57 Little Rock Hall 20.

Zane Widner led all rushers with 109-yards on only 5 carriers, an eye popping 22-yards per carry, and one touchdown he also caught two passes including one for a touchdown. Senior Spencer Bannister averaged 10-yards per carry as he had 60-yards on 6 rushing attempts. Senior Brody Emberton caught three passes for 39-yards and returned a punt for 60-yards and a touchdown. Once again senior quarterback Jobe Chalk was very efficient going 5-5 passing including one touchdown pass and scored a two-point conversion.

Clinton is now 3-0 on the season for the first time since 2019, when they opened the season with four straight wins, but more importantly the Jackets are 1-0 in conference play. The game was the second time Clinton has played on statewide TV the first was in 2009 vs Heber Springs. The Yellowjackets will continue conference play this Friday as they host the Mayflower Eagles at Jim Tumlison Field. The Junior Jackets will open conference play on the road Thursday at Mayflower they were idle this past week. The Clinton Yellowjacket Booster Club will honor the 1976 Conference Champion Clinton Yellowjackets as well as the 1977 Final Four Clinton baseball team.