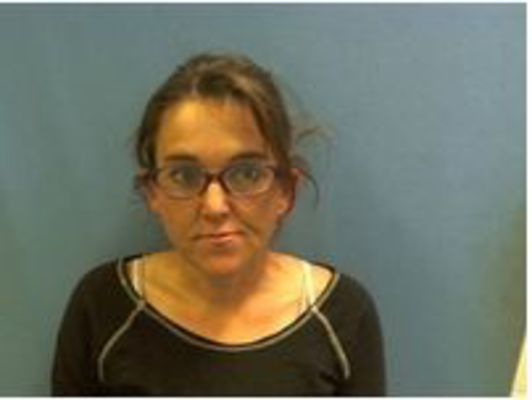 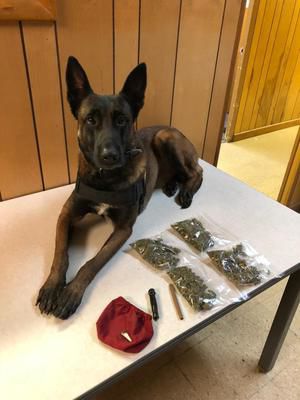 K-9 Terry with the Clinton Police Department poses with marijuana and drug paraphernalia confiscated after traffic stops. The dog’s tracking skills were also used to find a woman hiding in a field early Christmas Eve morning.

K-9 Terry with the Clinton Police Department poses with marijuana and drug paraphernalia confiscated after traffic stops. The dog’s tracking skills were also used to find a woman hiding in a field early Christmas Eve morning.

Clinton Police’s K-9 Terry was instrumental in two drug arrests by the department in the past week – including police confiscating a significant amount of marijuana.

In the first arrest, Monday, Dec. 23, at 8:48 p.m. an officer on patrol pulled a car over by the KFC on Highway 65, for having a light out. When the officer stepped up to the car’s driver’s window he “... could smell the strong odor of marijuana,” the report stated.

The officer got the driver’s and passenger’s ID, finding out the passenger had a warrant on file with the Marshall Police Department, but that department was not willing to travel to Clinton to pick the woman up. (This is not unusual when charges are relatively minor.)

The officer then had the K-9 survey the car. The dog “alerted” to the car at its passenger door, per the report.

At the point the driver of the car, Mallory Martin, 25, of Marshall, admitted she had a marijuana pipe in the car. The officer also found a marijuana cigarette in the woman’s wallet.

As the officer continued the search the dog alerted at the car’s trunk. There, under the spare tire, the officer found four “... large clear plastic bags containing a green leafy substance inside.”

At this point the passenger, Kayla Balding, 21, of Leslie, admitted the four plastic bags were hers and the green leafy substance was marijuana – a little over 3 ounces. She was arrested for felony possession of a controlled substance and transported to the Van Buren County Detention Center.

The officer noted in his report when he went to speak to the driver both the driver and his passenger were very nervous. They told the officer they did not have IDs and gave him their names and birth dates.

As the officer returned to his car to call in the names, the passenger, later found to be Aimee King, 35, of Dardanelle, jumped from the car and ran into the field behind the nearby Alon station.

The driver was put in handcuffs as a second officer attempted to catch King.

The first officer then called out to King that he was going to use the K-9 “to locate her if she did not come out,” the report stated, after the second officer told the first officer he thought he had seen King lay down in the tall grass in the field behind the business.

The officer then released the K-9. After tracking for 150 yards, the report stated, King was found laying face-down in the field. She was arrested.

The officer recovered a small flashlight the woman had been carrying. Inside the flashlight was “approximately 1.2 grams of suspected Methamphetamine and (2) Oxycodone pills,” the officer reported.

The driver, Kevin Stits, 30, of Clinton, admitted he had “stomped” on the smoking device at the driver’s seat when the car was stopped.

“Both subjects had active felony warrants at the time of the traffic stop,” the report concluded.

Both are currently shown as held in the Van Buren County Detention Center, Stits on a $1,500 bond for charges which included failure to appear, possession of drug paraphernalia and driving on a suspended license.

King is held on a $3,750 bond, charges include fleeing and drug possession.