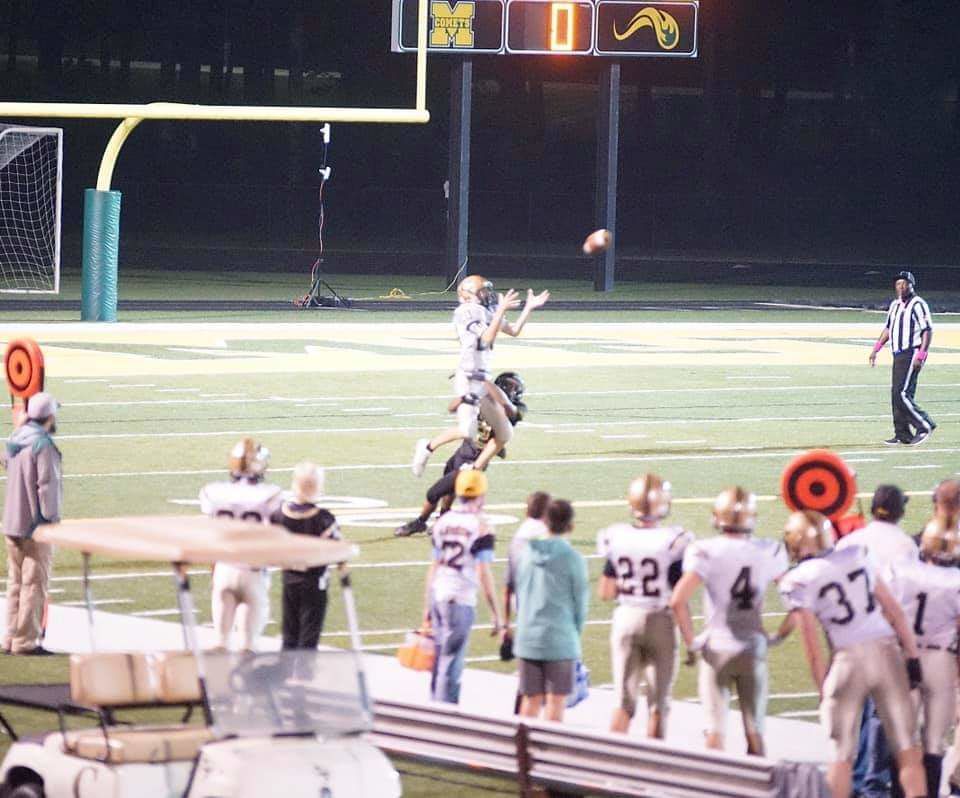 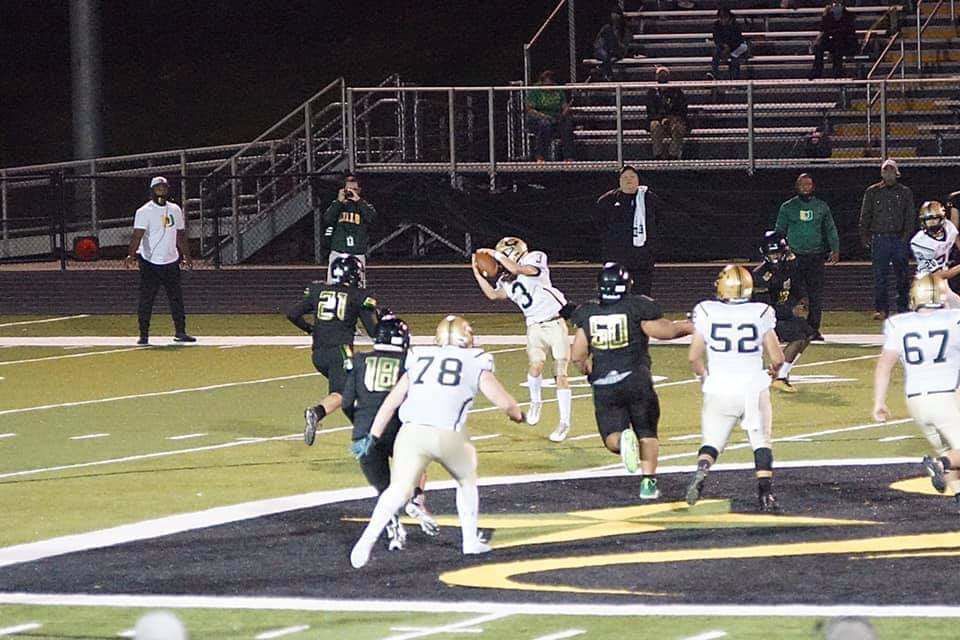 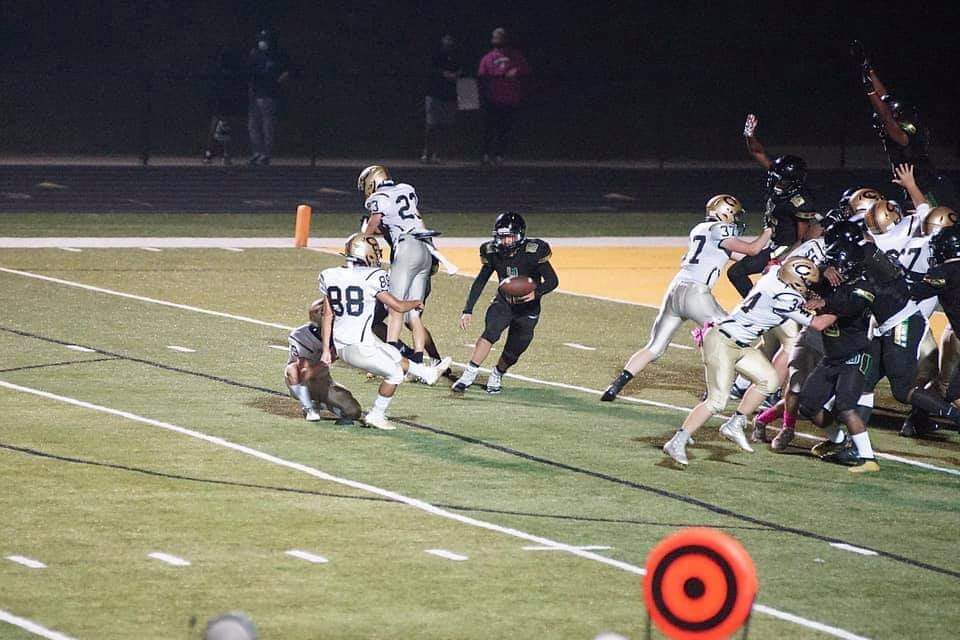 #88 Aldrich Infanti one of his extra points 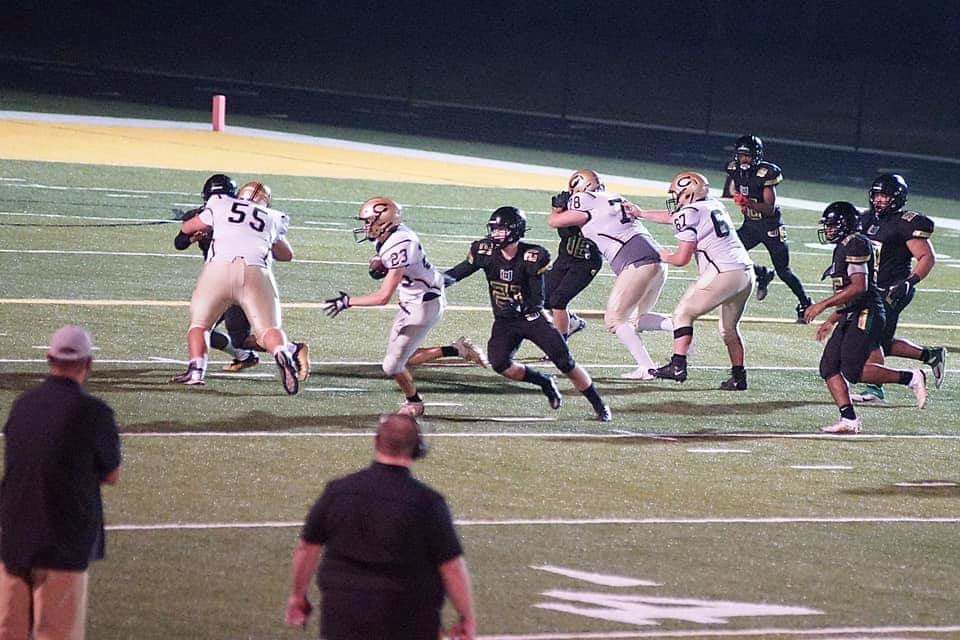 #88 Aldrich Infanti one of his extra points

On Friday night the Clinton Yellowjackets continued their improvement but once again came away with the loss. In the first ever meeting between the two schools the Yellowjackets built a 35-20 4th quarter lead before Mills rallied behind their talented sophomore quarterback Quentin King to give the Jackets a heartbreaking 46-35 loss. The loss now makes Clinton 0-6 on the season for the first time since 1999 and the Yellowjackets are now 0-3 in 2-4A Conference play.

Clinton got the ball to open the game and for the second straight week the Yellowjackets scored on their opening drive. The Jackets drove 57 yards picking up three first downs along the way. Cody Davis had the big play of the drive on a 22-yard run. Clinton scored when sophomores Harley Tobin and Brody Emberton hooked up on a 5-yard throw and catch on third down for the touchdown. Aldrich Infanti kicked the extra point putting the Yellowjackets ahead 7-0. The Jackets recovered the ensuing on-side kick but could not move the ball. Nick Epley intercepted a Mills pass setting up the Yellowjackets at the 35-yard line. The Jackets drove 65-yards for the touchdown. Blaine Emberton had a great 25-yard catch on the drive and Epley would score a 6-yard touchdown on Tobin’s second touchdown pass of the night. Infanti kicked the extra point giving Clinton a 14-0 lead with 9:01 left in the first half.

Mills answered the Clinton touchdown with their first score of the game. The Comets scored in three plays with King hitting Brailon Adams on a 52-yard touchdown pass. King ran it in for two points and Mills had cut the Clinton lead to 14-8. The Yellowjackets came right back to score on Tobin’s third touchdown pass of the game as he hit Epley on a 27-yard pass. Infanti’s extra point gave the Jackets a 21-8 lead. Mills scored just before the half as they drove 80 yards. Levell Carnell scored for the Comets on a 1-yard plunge. The Yellowjackets stopped a Mills 2-point attempt. Clinton went to the locker room at the half with their first half-time lead of the season 21-14.

Blaine Emberton intercepted a Mills pass to open the second half. Clinton took over at the 40-yard line. A 20-yard Epley run highlighted a 60-yard touchdown drive for the Yellowjackets. Tobin scored on the ground from 3-yards out and Infanti kicked his fourth extra point of the game to give the Jackets a 28-14 lead with 5:36 left in the 3rd quarter. It took 2:06 seconds for Mills to comeback and score. King hit Ryan White on a 7-yard pass for his third touchdown pass of the night. For the 2nd time Clinton stopped a Mills two-point conversion cutting the Yellowjacket lead to 28-20 with 3:30 left in the 3rd quarter.

Clinton scored their only touchdown of a wild 4th quarter with 11:02 to go in the game. The Yellowjackets drove 55-yards with Tobin scoring on a 1-yard quarterback sneak. Blaine Emberton had a big catch on the drive and Jacob Hutto made tough runs on the inside. Infanti kicked his 5th and final extra point to give the Jackets a 15-point lead 35-20. A King 12-yard run touchdown run for Mills cut the lead to 35-26 after the Jackets stopped another Comets 2-point conversion with 8:33 left in the game. Clinton stated their next drive at their own 39-yard line when disaster struck. The Yellowjackets committed their first turnover of the game when they fumbled on the first play of the series. The Comets scored in 37 seconds on a 24-yard King touchdown run cutting the Jacket lead to three 35-32 with 7:56 left in the game. On Clinton’s next possession they were forced to punt for the first time in the game after going three and out. Mills drove 73-yards to take the lead for the first time in the game. King scored on a 20-yard run followed by a 2-point conversion to give the Comets the lead 40-35. The Yellowjackets next drive ended in an interception and Mills tacked on a touchdown late in the game to make the final score Little Rock Mills 46 Clinton 35.

Clinton returns home to Jim Tumlison Field Friday night taking on conference leader Stuttgart. The Ricebirds come to town undefeated 5-0 and ranked number 6 in class 4A by Hooten’s Arkansas Football. Stuttgart played at Jim Tumlison Field in 2010 with the Yellowjackets defeating the Ricebirds 29-7 on Clinton’s way to an outright conference championship. It will also be homecoming week for the Yellowjackets.